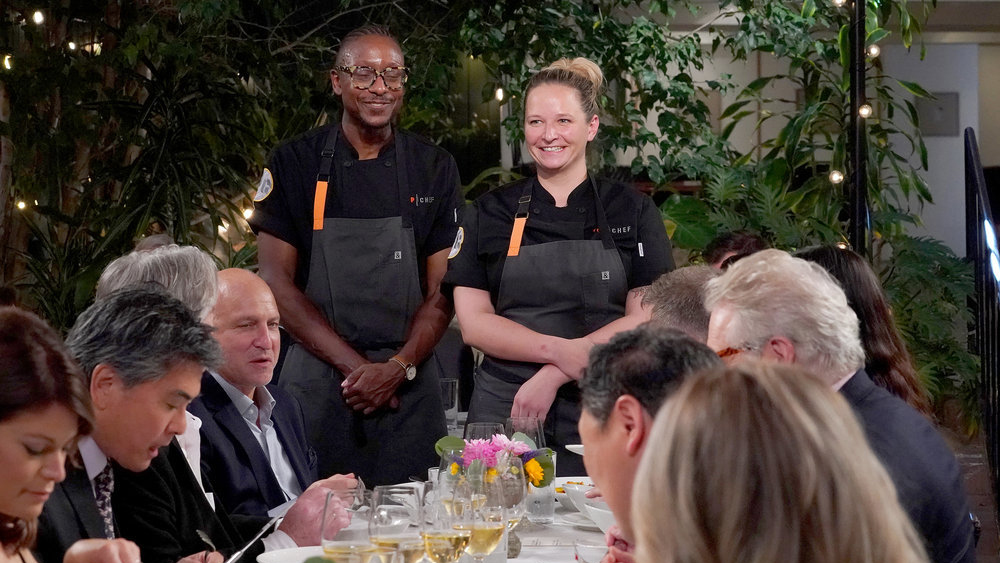 Before Covid-19 put a halt to restaurant scenes in general, the Los Angeles dining world was finally rising to prominence in the larger food community. From exceptional handmade pasta to contemporary Mexican to space age fine dining, some of the most exciting cooking was happening in the city of Angels. It wasn’t always thought of this way. In America, the city had long been an afterthought compared to New York City and San Francisco. But decades ago LA actually played a huge role in the emergence of the restaurant culture we enjoy now in America.

In Andrew Friedman’s great book Chefs, Drugs and Rock & Roll, he chronicles the rise of chef culture beginning in the 1970s through the 1990s just as the advent of the Food Network took it to a whole new level. And in that book he credits the restaurants Spago and Michael’s as leaders forging America’s food identity. Now, as this season of Top Chef prepares to leave LA for the finale in Italy, it honors Michael’s in Santa Monica by nodding to its importance for the rise of California Cuisine. As Our Favorite Ginger Beard™ Kevin Gillespie says (he’s back by the way after winning Last Chance Kitchen!), “I honestly can’t tell you how many big-name chefs came out of that restaurant, it definitely has left a mark in the culinary history books.”

Remember flying? Remember actually going somewhere? Remember the little trays of food you get onboard? Top Chef is here to remind you. This week’s quickfire is a fun one, where the cheftestants must cook a meal airlines could serve to first class passengers. To judge them, there’s Jonathan Waxman (opening chef of the aforementioned Michael’s) and, of course, Padma Lakshmi. Except this week, Stephanie Cmar calls her Champagne Padma, as the normally stoic host is clearly having a grand old time sipping bubbly and asking Waxman about his favorite nuts.

Total chaos breaks out as the chefs rush around, trying to create something basic enough that a catering operation inside a hangar can execute, but still special enough to impress the judges. Thinking of the constraints while the cheftestants cook (like the height limit where food can’t rise above the edge of the plate) helps explain why airplane food is generally disappointing.

The 30 minutes are up and the gang must feed the judges as they sit in big first-class seats. Gregory Gourdet’s chicken and broccolini looked quite appetizing. Flat-Brimmed-Hat Dad Bryan Voltaggio tried as hard as he can to get an elusive quickfire win, but his lentils were underdone and he knew it. Champagne Padma struggled with the paper from Stephanie’s fish en papillote. “If I’m having trouble doing it, how is a flight attendant going to?” I’m hoping flight attendants won’t be three sheets to the wind, nonetheless, it landed Stephanie on the bottom. Judging by Padma’s sawing with her knife, Malarkey’s pork chop was replaced by the sole of his shoe. Kevin’s meatballs exceed the height limit, but they generously agree to smoosh them into patties to fit in the bowl. And his carrots were on point in the eyes of Padma and Waxman.

And then there’s Melissa King, killing the game. She forgot that she’s even supposed to do an appetizer and ended up creating a winning one anyway. Her chilled tofu salad with yuzu and chili accompanied her beef curry and she won the quickfire yet again.

Waxman stayed on beyond the quickfire because the elimination challenge was near and dear to his heart. After leading the way at Michael’s, Waxman brought California Cuisine to New York, opening the hit restaurant Jams. Eventually he created the rustic Italian Barbuto in New York’s West Village, becoming a neighborhood institution before closing last year and reopening in a new location this past February.

The cheftestants head to Santa Monica to one of the Meccas of California Cuisine to try dishes by famous chefs throughout Michael’s 40 years of service. It was a stroll down memory lane seeing dishes by Mark Peel, Sang Yoon, Waxman and more. They’re served six entrees and then drew knives to determine the order in which they’d get to pick the recipe they wanted to reinterpret.

In Gregory’s confessional interviews, he seems pretty rattled and morose for most of the episode from the moment he starts describing how all the dishes he would have liked to have cooked get picked by other chefs. When he selected fifth out of six, he got a beet risotto and monkfish dish from 1998 that’s pretty far from the type of bold, global flavors he uses in his cooking. While others seem excited by their dishes, he looks out of sorts. Melissa found a way to bring Asian flavors into her quail; Ginger Beard saw Mark Peel’s duck through his Southern lens; Stephanie Cmar created a clever update a very dated spaghetti and scallop preparation with a beautiful stuffed pasta; Voltaggio kept it simple, refined and respected the produce; and Malarkey went a bit nuts at Whole Foods, ultimately buying ingredients that clashed with each other.

The best and worst on the night present side-by-side.  Photo: courtesy Nicole Weingart/Bravo

For judges table there was no big deliberation and dividing of the group into top and bottom before they announced the week’s winner: Melissa. The praise by the diners on the night was effusive:

“It really just highlighted the bird itself. I honestly love this.”

“I thought it was outrageous”

“Melissa knew to just leave it alone and she had the confidence to do that.”

So she’s got her passport stamped for the final in Italy. Next to join her was Stephanie, the personal chef slaying big-time restaurant cooks left and right. Right after her, Voltaggio and Ginger Beard earned their tickets too. That means either Gregory or Malarkey would be staying stateside.

The bottom two this challenge both looked pretty rattled for much of the day. Malarkey, who missed his twins’ ninth birthday party to be on the show looked stressed. And then when it came time to actually present the dishes to the judges, the plates he prepared specifically for the honored guests went to another table, which threw him off his game. Then he intended his dish to be a duo of distinct dishes, but diners mixed the two together and he knew that wouldn’t be appetizing. The cooking was technically strong, but the concept failed him.

Gregory, out of sorts and seeming to struggle in Michael’s very tiny kitchen makes a dish he doesn’t love and then doesn’t get the crispy prosciutto on the plate; thus it misses a vital component, which is that salty fattiness he needed.

Malarkey, before Padma and Co. even rendered a judgement lost his cool to the panel and seemed to want to quit. Gregory implored him to not do so and let the judges decide their fates. Ultimately, they ruled in favor of Gregory’s coherent-but-bland dish over Brian’s wild and wooly creation.

Listen, I’ve had a lot of fun at Malarkey’s expense this season, but, you know, I guess that really is the extent of that thought. Goodnight, sweet prince, pack your knives and go.