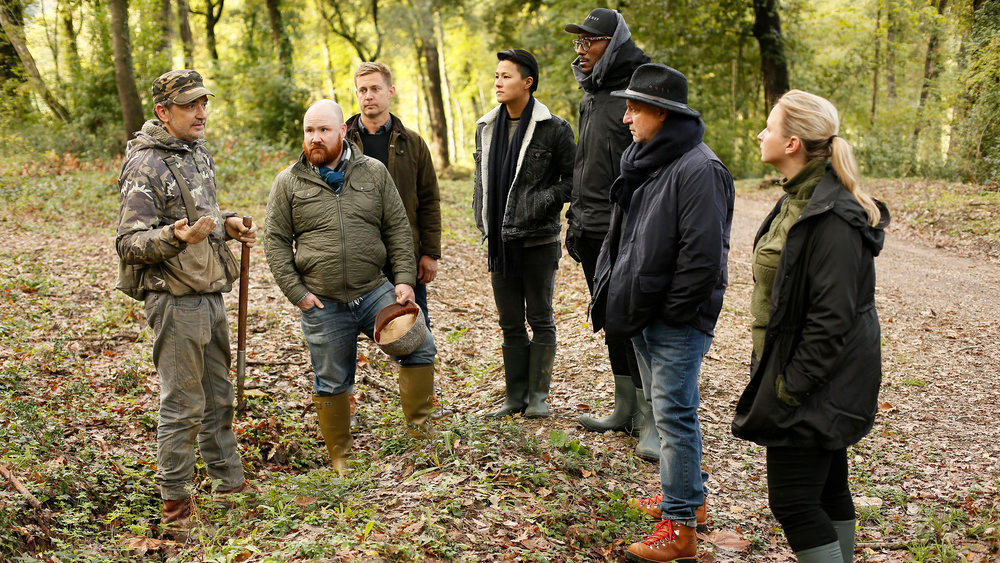 The cheftestants get one last sunrise in Los Angeles, along with one more product placement, before embarking to Italy. Four of the finalists: Gregory Gourdet, Flat-Brim-Hat Dad Bryan Voltaggio, Melissa King and Ginger Beard Kevin Gillespie seemed poised from the beginning to make it to this point, but five chefs get to go. They’re joined by the dark horse, Stephanie Cmar who came into this competition in awe of the other chefs’ awards. She faltered before finding her confidence and making dishes that not only keep her off the bottom, but make her the victor of Quickfires and Elimination challenges. Can she survive and advance like the 1983 NC State Wolfpack that improbably won the NCAA title? Let’s head to Tuscany to find out.

Chef Filippo Saporito of the Michelin-starred restaurant La Leggenda Dei Frati joins Padma Lakshmi to educate the cheftestants on aperitivo, the Italian take on happy hour. Each of them needs to make a snack for the 30 locals who will gather in Lucca, Italy’s town square to drink some corporate product placement. Said corporate product placement will also give the winning chef $10,000. The little twist to the challenge—other than the crazy ask to cook for 30 people in 45 minutes—is that each chef will cook ingredients from a different region of Italy.

Gregory wants to steam some clams, but to his dismay, once they open he sees they’re full of sand still. Kind of crappy that he was hamstrung by an ingredient that wasn’t handled properly before given to him. Melissa goes bivalve too, steaming mussels in beer and then pickling them. Stephanie is speaking my love language by saying “cheese” “sandwich” and “deep fried” in the same sentence. Kevin finds a way to make southern food in northern Italy, but finding the crossover between grits and polenta. And Voltaggio? Well, he’s still trying to figure out what he’s going to make.

Stephanie’s crunchy little sandwich was a great idea but missed on execution. Voltaggio’s time crunch also put him at the bottom. On the top, Gregory made a successful pivot to cuttlefish and nailed his chickpeas; Filippo said of Melissa’s mussels that “The citrus opens your heart and opens your stomach;” and for the ultimate winner, Kevin, he made it feel like you were in Venice when eating the dish and not necessarily Atlanta.

Cristiano Tomei, the chef behind Michelin-starred L’Imbuto in Tuscany, is a bit of a character. The Top Chef producers identify him as an “avant garde chef,” and he’s known as someone willing to break with rules and tradition in his cooking. And while he’ll use techniques from around the world, he likes to focus on meat, fish and produce from the region surrounding Lucca.

Like out of some sort of spaghetti western, Tom Colicchio comes strolling into the piazza in his blue jeans, boots and hat. He’s ready to hunt; not bad hombres, but white truffles. Unfortunately, they’re not using pigs to hunt, because our porcine friends have a bad habit of eating them, so they join a pair of guides and their trusty dogs to root around in the Italian loam (you can learn more about those dogs). To the cheftestants’ shock and delight, the lil’ pups unearth thousands of dollars-worth of the delicately flavored fungus that cost about $3,000 per pound.

The truffles were procured with ease, then comes the hard part. They’ll cook for 100 hungry Italians. The chefs can cook whatever they want as long as it highlights those pricey truffles. They’ll do their cooking at L’Imbuto’s kitchen and then venture over to Palazzo Pfanner to serve the party.

I have this thing when I travel, and I don’t know if its normal, but I really like going to a city’s supermarkets and convenience stores to get lost and buy random weird snacks that I find along the way. So to watch the cheftestants wander through some random grocery where you can get wild boar cheeks at the butcher counter, I’m kinda jealous. You can have the Louvre, give me Franprix.

Stephanie wanted to do a truffle egg drop soup, does all of her shopping accordingly then has a change of heart in the middle of the night and decides she’s in Italy, she loves making pasta, so she needs to follow her heart. Gregory is not as familiar with white truffles as he is with black, and he’s planning a cocoa and wild boar stew—yet Kevin remarks in his confessional that the black truffles may work well for that dish, the flavors will overpower white. Melissa stays true to her cooking, merging Italian ingredients with congee. Voltaggio is going super stripped down for his veal shank and potato so he doesn’t get in the way of the truffle. Meanwhile, Ginger Beard is approaching this with the idea he can introduce truffle throughout the cooking to layer the flavor in addition to finishing with the tuber.

A great thread running through this episode is everyone clowning on loveable, dorky dad Voltaggio, where Stephanie jokes about how “cool” he is and then Melissa clowns on how clunky his Italian is despite having the last name Voltaggio.

As they get ready to serve the guests, Stephanie is caught weirdly in between confidence and timidity. She has the confidence to take the risk and scrap her original idea for a better one, but when she makes one component that’s really bad, she doesn’t have the fortitude to leave it off dish because the element was already printed on the menu. And then, to make things worse, she finds out Italian grandmothers go hard in the paint. They tell Stephanie “We’re all so used to pasta. You should try something else.” DAMN. C’mon, nonna, give her a break!

The two winning dishes were pretty different from each other, but they had a unifying characteristic in their construction: They let the truffle be the star. Voltaggio’s aerated potato was light, yet rich and the perfect counterpoint to the truffles, while Cristiano loved the classic pairing of veal and tubers. Though he didn’t like the salami in the congee, Cristiano loved that Melissa was herself and brought the rice porridge she loved to the challenge.

Living with the memory of being eliminated first in the Top Chef Boston finale, Melissa shook off those demons by winning the very first challenge, getting her one week closer to being a champion.

Before Judges Table, the chefs gather for one last conversation. “I think this the part where we tell each other be happy that you made it to the finals and be proud of yourself for getting here,” Kevin says. But you kind of get the sense he’s making that speech because he thinks he made the best dish and he’s being magnanimous to the losers. Turns out, he’s on the bottom and in real danger of going home. As the judges tell him what was wrong with his dish, he looks like he’s struggling to stifle the rage burning inside him. It was deemed to have too many flavors going on, but ultimately, he was safe.

Padma said Stephanie was courageous to make pasta for Italians and she actually made a pretty delicious dish, but the radicchio paste that she didn’t like at all herself really threw the dish out of whack. And Tom argues that she started layering on too many overwhelming flavors that overcomplicated what should have been a straightforward pasta dish.  As one diner said during the meal, “The white truffle is unforgiving. Anytime the white truffle is paired with an ingredient it doesn’t like, it disappears.”

Speaking of thousands of dollars of truffles disappearing, there’s Gregory’s wild boar. Everyone actually thought the boldly flavored stew was great, but just overwhelmed the truffles. “It was great, it’s just not a great dish with truffles,” Tom lamented. And Cristiano remarked, “If you had black truffles, that dish would have been perfect.”

So I’m very sad to report that Gregory, you have to pack your knives and go. The person I was pulling for all season came up just short. However! Gregory spoke to me about the Haitian restaurant he’s developing in Portland, Ore., so all the Gourdet fans can read all about the plans.

Cheese and meat and meat and cheese—the gang is heading to Parma! It’s the home of Parmigiano and prosciutto, two of the lord’s great gift to humankind. Parm will also be the city where one more chef falls just short of the grand finale.