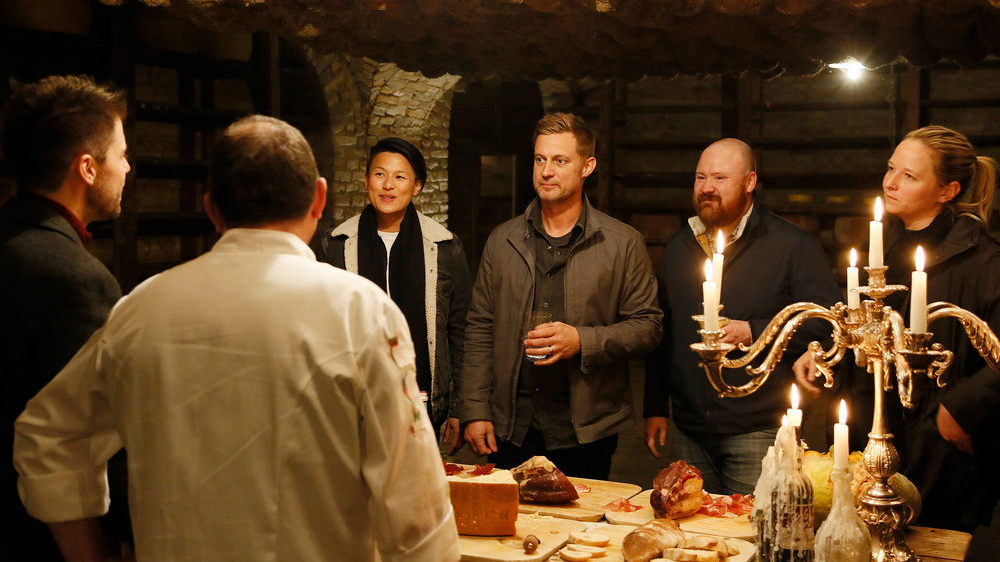 No one would say Survivor or MTV’s The Challenge or Kid’s Halloween Baking Championship are any way a barometer of anything in the culture. How could people expect that of a reality TV competition show in the first place? It’s just grist for the entertainment mill. But Top Chef can actually make such a claim. Though imperfect, it’s hard not to acknowledge that you can understand some of the larger trends in restaurant cooking by watching the show.

More than a decade ago when Kevin Gillespie and Bryan Voltaggio first competed on the show, they ultimately lost to Bryan’s brother Michael, who wowed the judges with his modernist technique that he honed under Ferran Adria protégé José Andrés. At the time, Michael had a dig at Kevin’s rustic, soulful Southern fare saying it was akin to what Michael made on his off-day at home.

Now, in 2020, that’s the food people crave and molecular gastronomy (although still sneakily influential on food today) has fallen far out of fashion. And once again, Bryan seems stuck a bit in the middle. He still uses some of those technical flourishes that made judges fawn over his brother, but now Padma Lakshmi and crew look at them more askew. That happens in this episode. Bryan, as ever, remains a model of technical proficiency, but his is a bit of a view from nowhere. The identity of his food is rooted in the tradition of fine dining and its techniques, and not so much a place like the South or Italy or China. While Voltaggio’s style of food was valued much more by judges 10 years ago, now it feels more like gimmickry.

This week, as the grand finale looms, there is no wasting time with a quickfire. Instead, the cheftestants will make two dishes during the elimination challenge. 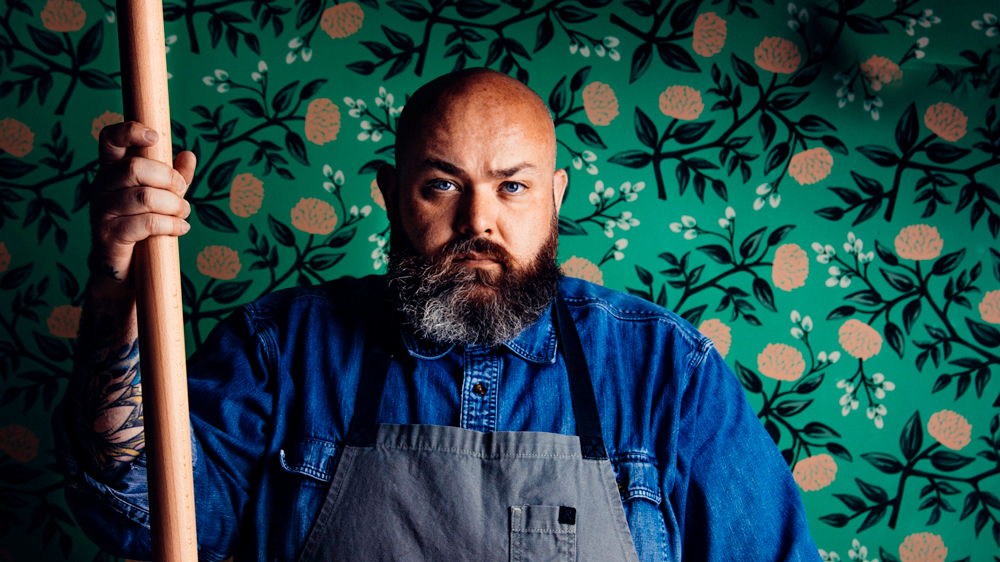 One of the kings of handmade pasta.  Photo: courtesy Eric Wolfinger

Though he’s not Italian, Evan Funke of Felix in Venice, Calif. is one of the great handmade pasta makers in the world. He trained under Alessandra Spisni in Bologna, to roll perfect sheets of dough that he now makes inside his temperature-controlled pasta lab in the middle of his restaurant. He has led an American movement to feature handmade pasta in restaurants. “It’s completely terrifying to make pasta for him,” Melissa King says.

The cheftestants are on the precipice of greatness, but first they must go to north from Tuscany to Parma, Italy to genuflect before culinary royalty: Parmigiano-Reggiano and prosciutto di Parma. The cheese and ham that have swept the globe must be highlighted in the two dishes the chefs will make. The have a primi course of either rice or pasta and then a secondi, which is the main dish of meat or fish.

Before they depart, in this week’s spon-con we learn that a bottled sparkling water company is looking to help people in Italy get creative; to be effervescent with new ideas, so to speak. A bubbling over of corporate jargon, if you will. But instead of saying “spur” it sounds like Padma says “spurn,” so this is a program to help “reject with disdain and contempt” new ideas in the world of food as the traditionalists nod solemnly in agreement.

Lorenzo Cogo, Italy’s youngest Michelin-starred chef, greets the crew to show them the epicurean delights of northern Italy. The watch cheese being made, but not pigs being led to the abattoir. Nevertheless! They’re taught about the finer points of cheese and ham and “they must never cook the prosciutto.” We find out later in the episode that some rules are made to be broken—while some are definitely not. Cogo leads them to markets to buy the rest of their ingredients and then to a Michelin-starred restaurant, Antica Corte Pallavicina, with a 700-year-old cellar for aging meat. That’s where ’70s adult film music plays over footage of Kevin in ecstasy about the culatello they’re eating.

All the gang is hard at work for a panel of illustrious eaters. Voltaggio wants to stay simple but update a classic with a touch of the molecular; Melissa is bringing some Chinese influence while deploying some classic French along the way; Kevin is going ham, pairing pork with pork, as is his wont; and Stephanie is cooking with a poise and clarity that’s only grown over the season, letting her zig where everyone else is zagging with her two dishes.

“I find Bryan’s plate completely devoid of any love or passion,” said the Michelin three-star chef Roberto Cerea. “The dish is flat.” That’s lowkey one of the more devastating critiques in Top Chef history. It damn near made a grown man cry. 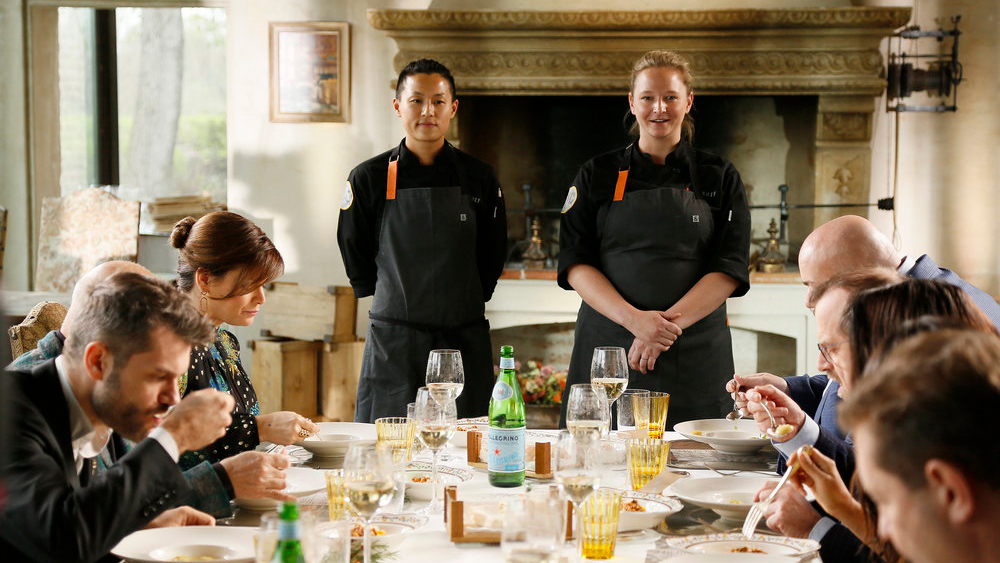 The chefs finish their cook, go to the stew room and find yet even more ham awaiting them. When they emerge before the judges they find out two of them rose above the rest: Melissa and Stephanie.

Stephanie is beside herself. She can barely believe she’s made it this far as she soaks in the accolades. Both of her dishes were actually quite bold. She cooked prosciutto when she wasn’t supposed to for the first dish, and for the second—when she’s tasked with creating a meat course—she focuses on the cabbage.

But victory on the day—and for the third challenge in a row—goes to Melissa. Despite the difficulty she had during the cook with clarifying her broth, she crushed the brodo. And then when it came to her main, she was quite clever. XO is made with dried scallop, but she used fresh scallop and then put prosciutto in her hot sauce that went atop the shellfish.

At the end of the meal, it did seem pretty clear that the two men were on the bottom and the judges confirmed that.

Voltaggio really looked out of sorts plating his first dish, scrambling and knocking over stuff as he tries to get everything on the plate before time expired. He made the most technically proficient pasta of the four, but his modernist touch of aerating the parmesan—seemingly something his brother would have been lauded for during the season he won a decade ago—really didn’t fly with the group. And again, with Voltaggio’s second dish there was a lot of excellence in execution in how beautiful it was, but it lacked complexity in texture.

Kevin’s beans went over very well, but he drowned what was a good dish in heaps of parmesan that overwhelmed the hard work he’d put in otherwise. And for his second dish, he overcooked pork that he thought was perfect and the prosciutto was an afterthought in the plate as a whole.

Voltaggio looked positively broken when he learned that the chefs didn’t think there was heart or soul in his dish. For the remainder of judge’s table, he seemed on the verge of tears. Ultimately, though, his dishes were better spotlights on the prosciutto than Kevin’s. So for the second time this season, Ginger Beard had to pack his knives and go.

The grand finale featuring Melissa, Stephanie and Voltaggio will require them to make the four-course meal of their lives. They’ll have the help of Kevin, Lee Anne and Malarkey, but not Gregory. Which I think really does show how bad his back was hurting him in Italy making him unable to be a sous chef in the final challenge. One more to go. The Super Bowl of Top Chef awaits.