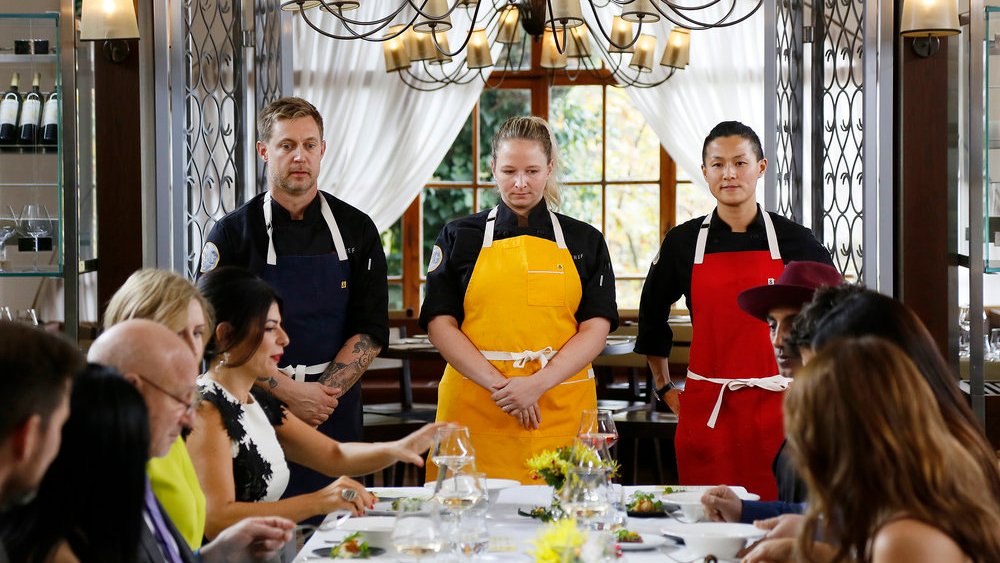 In a season honoring Los Angeles, one LA legend was noticeably absent: Wolfgang Puck. Sure, snooty New Yorkers may like to make sport of disrespecting the chef to the stars who became a star himself. But he’s much more important to late 20th century American dining than his east coast critics give him credit for. In the 1980s at his hit restaurant Spago, and especially at Chinois on Main, Puck helped usher in era of fusion cuisine by merging Asian and European traditions. Perhaps some of the dismissal of Puck is simply a residual hatred of what that trend devolved into: sushi tacos at Guy Fieri’s Tex Wasabi’s.

Though Top Chef’s Melissa King was likely thinking about neither Puck, nor the Mayor of Flavortown in this season’s all-star finale, their métier was on her mind, with her melding of Italy and China. “The term fusion has a bad wrap,” she says. “I really want to change that.” She had four more dishes to serve this season to see if she could convince the judges that fusion shouldn’t be relegated to the 1980s like Care Bears and acid wash jeans.

For the finale Melissa, flat-brimmed-hat dad Bryan Voltaggio and charming underdog Stephanie Cmar must cook the four-course meal of their lives, with the help of some sous chefs, of course. Lee Anne Wong, Brian Malarkey and Kevin Gillespie reappear out of the fog to join their former rivals to help them across the finish line in Tuscany. The cheftestants draw knives, pair up, then make the drive to Florence to get inspiration and shop.

Melissa shopping with her sous chef for the day.  Photo: courtesy Ernesto Ruscio/Bravo

Bless Lee Anne’s heart, but she cannot turn off her spigot of ideas. So you get to watch King nod along politely, furrow her brow, give an extended “yeeeeaaaaaahhhhhhh” with every suggestion thrown her way and then turn right back to what she wanted to do.

Malarkey is back, but decidedly toned down. He’s actually acting like the perfect sous chef, ready to grind and be the cheerleader when necessary.

Kevin…hmmmm…there’s something about Ol’ Ginger Beard that’s soured over the course of the season. He seems to very much want to be the good guy, but you can tell there’s an ocean of self-regard there underneath the surface. When he says “It’s been a long time since I’ve been a sous chef, but I’ll do everything you want me to do, man,” my wife and I cringe. Even in his moment of being second banana, he can’t help but remind that “listen, I’m used to being the boss!”

The criticism of last week clearly stung Voltaggio, whose modernist bent was called soulless by some wildly gesticulating Italian judges. When Tom Colicchio wanders the kitchen to check in during prep, Voltaggio tells him “I think that I’ve given you stuff where it looks like I’m just a modernist cooking chef, but I’m more than that.” He creates dishes, like his note-perfect lasagna, that finally tap into his food memories in a satisfying way. “I’m going to slap them in the face with heart and soul,” he exclaims. Ok, maybe tone it down just a touch, Bry.

Stephanie is cooking with abandon, already making it well past where she thought she would and embracing that her food is simple, but delicious. And she, along with her two rivals, do a great job building menus that reflect their style of cooking.

Right out of the gate all three cheftestants impress the august panel of peers evaluating them, which includes Clare Smyth (the first British female chef to hold three Michelin stars), the mad butcher of Tuscany Dario Cecchini, Marcus Samuelsson and the chef-owner of the world’s No. 1-ranked restaurant Mirazur, Mauro Colagreco.

Next up, their pastas all knock it out of the park, but you can sense Melissa pulling away from the pack. Whereas Stephanie and Voltaggio are conceiving of amazing versions of dishes they’d had in the past, Melissa seems to be creating things that never existed before. By the second course, that dawns on Samuelsson. “With Melissa, we’re watching completely original food, which is very very very difficult,” he says.

All of them keep powering through, with only minor hiccups along the way, and you get the sense that all three chefs absolutely nailed their cooking. The winner will have the satisfaction of knowing they beat a pair of superlative performances.

Voltaggio is known as the master technician of the group, which he’s shown all season, but there was something very impressive about watching Melissa be able to adjust on the fly in the finale. She was going to duck, but then she got the bright idea to do squab (aka pigeon, aka what my good friend and pigeon-hater Kellen refers to as “rats with wings”). Also, she could see her original tiramisu wasn’t working and was able to fix it, and then when she tasted Tom’s grilled squab, she changed course on her preparation to live fire too.

She cooks with a complexity that’s actually born of simplicity. Melissa cuts through the extraneous to understand the greatness of a cuisine in its most elemental forms, and with that knowledge she combines seemingly divergent cultures in harmonious ways. It was actually exciting to watch her cook this year and see her clarity of vision. It was enough to make one grown man cry. As Dario the mad butcher ate his tiramisu, he was brought tears. “My favorite is Melissa’s dessert because it respected the traditions of Italy. Melissa made an interpretation of one of our traditions and she made it from the heart. It makes me very emotional,” he says.

She pulls off the trick to bring two cultures together on her plates while also making the dreaded F word—fusion—not seem so dirty after all. And for that, Melissa King is totally deserving of her new title: Top Chef.