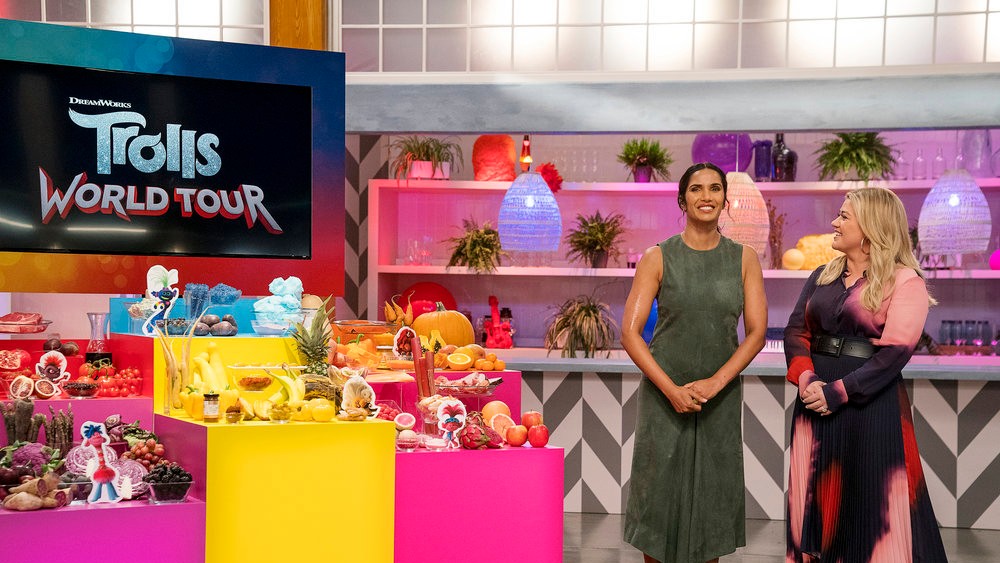 “It’s like a rainbow threw up everywhere,” Stephanie Cymar deadpans as the cheftestants walk into the Top Chef kitchen to find a display filled with colorful ingredients and six different Troll dolls. They then all howled in approval when Kelly Clarkson, their fellow reality TV gameshow contestant, arrived as guest judge. She also happens to be a star of Trolls World Tour a film by DreamWorks, which like Bravo, is a subsidiary of NBC Universal. Purely a coincidence, I’m sure.

Today’s quickfire challenge is the grotesque offspring of an infomercial for a kids’ movie mating with an episode of Chopped. Inspired by the movie, they’d have to pick disparate ingredients from each of the six colors to correspond to different trolls. It left cheftestants seeing if they could find a way to pair cotton candy and steak.

Bravo has been hamfisted the last few years with these movie tie-ins during its reality shows, but this one was especially cringey. Padma Lakshmi and Kelly forced all of us to watch a trailer of the movie. During, producers cut to videos of cheftestants straining to laugh while watching the trailer. The pain was so evident on their faces you could have told me they were being hit with a cattle prod to get a reaction and I wouldn’t have doubted you. At one point it looked like our favorite ginger beard Kevin Gillespie would rather exit his mortal coil than watch anymore.

Oh, right, cooking. Gregory Gourdet impressed Padma and Kelly the most with a creative vegan soup. For all his hard work, he won two tickets to the red carpet premiere of, you guessed it, Trolls World Tour! Unfortunately, the premiere was to be Friday, April 10, so unless DreamWorks did a red carpet on Zoom, he was spared having to watch the movie in its entirety.

We thought we were done with the synergy, but we were so wrong. There was a basket of horrid Trolls merch when they returned to the house. Some believed Kelly Clarkson had actually sent the tchotchkes there personally out of the goodness of her heart. Surely it wasn’t some hapless production assistant scrambling to get that crap from the Universal Studios theme park store over to the Top Chef manse. Anyway, they all tried on a bunch of the free merch and it demeaned us all.

Jeremy Fox isn’t a household name in the way that David Chang and Rene Redzepi are, but he’s quietly one of the most influential chefs of his generation. After working under David Kinch at Manresa in the Bay Area, Fox became the chef at a vegetarian restaurant attached to a yoga studio. On the surface it was an odd move, but with the aid of a dedicated garden, he turned Napa Valley’s Ubuntu into a sensation, earning a Michelin star along the way—almost unheard of for a vegetarian-only restaurant. Chefs from all over the country have looked to him on how to cook vegetables more creatively, and now the cheftestants would have to impress him. As Padma lets them know “Jeremy Fox literally wrote the book On Vegetables.”

The cheftestants draw knives to randomly split into two teams and it’s apparent from the outset one is significantly stronger than the other. They are each tasked with creating a six-course vegetarian tasting menu to serve to Padma, Jeremy, Tom Colicchio and Gail Simmons at Fox’s newest restaurant, Birdie G’s.

To cook the meal, they get to descend upon the famed Santa Monica Farmers Market to shop for ingredients. I actually live six blocks from the market, which is open every Wednesday and Saturday. It’s the real deal. You can regularly see the best chefs in LA wandering among some of the best produce you’ll find in America. I was once there with Matt Orlando of Amass in Copenhagen and he ate a date—probably from the same vendor that Ginger Beard got his dates that the judges loved—and Orlando turned to me and said, “That may be the best date I’ve ever had in my life.” So I actually believe the cheftestants are excited to shop there.

Since we’re all about synergy in this episode, we’ll take a brief timeout to let you know a Penske truck was spotted in multiple shots at the Santa Monica Farmers Market. If you don’t know, Robb Report’s parent company is PMC—the “P” standing for Penske. It’s not the same company, but we’re family.

Anyway, when it came to shopping, Lee Anne Wong was making it rain to get a rich and varied crudité; Lisa Fernandes is stoked to finally find Brussels sprouts; Melissa King is wandering everywhere for corn, eventually striking gold; Ginger Beard is inspired by dates he had not planned on buying until he tasted them; and Bryan Voltaggio is scrambling because this is the one day the mushroom guy doesn’t show up, thus throwing off his dish. Will he recover? Tune in after the break to find out.

After shopping they start prepping and cooking the dinner at Birdie G’s, creating the following menus:

Cooking is running relatively smoothly until disaster struck for Jen. Her coriander cashew butter, which had been simmering away gently on low got turned up to a full flame and ruined it. “It’s trash,” she dejectedly declares. But instead of folding up her tent like she may have done in past seasons, she fought to adjust the dish and fix it.

As Lisa looks around to survey her competition, she senses something is amiss. “My dish may be a little less refined than other dishes than I’m seeing, but that’s the way that I like to cook,” she says in her confessional. And Lee Anne, as usual, is scrambling to get everything on the plate as time nearly expires, thus she relies on Malarkey to do the final hit of sea salt.

The first dishes come out to the judges and the red team immediately underwhelms. Tom, aka papa bear, aka disappointed dad, looks incredulous as he wonders why Malarkey deigns to serve him a boring Caprese salad. Whereas Kevin’s raw dish is both simple and complex at the same time. It proceeds like that, with each dish from the blue team looking more elegant and refined—worthier of a tasting menu experience. This one didn’t seem close.

“Brian, I think you gave us an absolutely beautiful version of a dish we’ve all seen a thousand times,” Gail says.

That may not sound that bad, but she’s pretty much calling Malarkey boring and uncreative right to his face.

The winning team works together to plate a course.  Photo: courtesy Nicole Weingart/Bravo

Padma wastes absolutely no time once the cheftestants arrive at judges table. “There was a team whose progression was a clear winner,” she says. “Blue team, please stay here.”

“It had a start, it had a finish, it was solid all the way through,” Tom exclaims. Each dish was refined and well done on its own merits, and the progression of the meal was great too.

Padma gave Jeremy the honor of announcing the winner. “The chef who had the winning dish today gave us a beautiful plate of food, it was well executed, it had great flavor and really highlighted the season and the farmer’s market and that chef is [DRAMATIC PAUSE] Melissa.”

Melissa, with two wins in a row is currently crushing the game. Can she keep the streak alive?

Red team got off to a really rough start, clearly not communicating well enough. “Going with two raw dishes to start was really puzzling, I didn’t get that,” Tom told them.

Malarkey was hit pretty hard for being so simplistic in his approach. He may have executed it well, but the tomato and burrata was so lacking in ambition, it called into question whether he deserved to be there.

While Lisa defending her sprouts as rustic, the judges disagreed. “In comparison to what else we ate today, it seemed a little clunky.” Padma said.

Lee Anne is told her dish needed salt and she says someone else added the salt at the end. Malarkey does some old school Top Chef with his CYA maneuvers of taking some responsibility while using his time to speak to insult other parts of Lee Anne’s dish. “But I’m hearing that the hummus was needing some seasoning too, is that correct?” Upon hearing that Lee Anne has to take some real deep breaths to calm herself. Producers quick cut to her confessional and she exclaims, “Do you see the bus tracks on my back? Holy shit!” That’s the drama I want.

Who would the judges punish? Malarkey’s boringness, Lisa’s clunkiness or Lee Anne’s blandness?

Ashes to ashes, dust to dust, Lisa, you’re dead to us. You can pack your knives and go.

On the next episode of Top Chef we see a quickfire that practically presaged our era of social distancing, where cheftestants’ loved ones are on the phone telling them about a dish they’re eating so the crew can recreate them in the moment back at the kitchen. And then, in the elimination challenge, those same loved ones offer a hand, but it appears Lee Anne’s mom gets sick but still pushes on. We’ll see what happens next week.