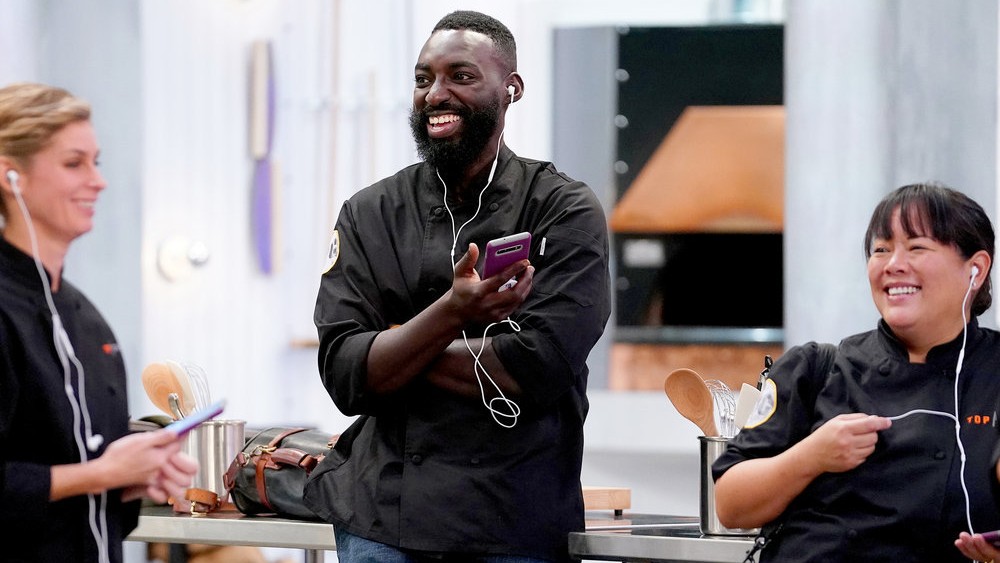 It was “Bring Your Loved One to Work Day” over at the Top Chef kitchen. That means you get reaction shots to family members coming around as if the cheftestants were Tom Hanks in Castaway finally getting to return to the mainland again. Of course, the cheftestants have only been marooned in Los Angeles for a few weeks, but even small amounts of absence can make the heart grow fonder.

Their hearts have shown more growth than that. As we discussed in an earlier recap this season, these chefs have mellowed a bit in the years since they last competed (Not Brian Malarkey, he’s still turned to 11 at all times). Being with their families helps bring that side of them out even more, getting them to discuss how they value those loved ones even more now. “You can tell some of these chefs have been to therapy since the season they appeared,” my wife turned to me and said as another cheftestant spoke in clinical terms about accepting mistakes in life in a way they were unable to previously.

This whole episode would revolve around loved ones for both quickfire and elimination, and it’s one of those rare instances where the mini challenge ends up being far more entertaining than the main one.

Lee Anne cooking while talking to her mom on the phone.  Photo: courtesy Nicole Weingart/Bravo

The cheftestants walk into an abandoned kitchen, no Padma Lakshmi in sight, and their only connection to the outside world is a conspicuous product placement on each of their cooking stations. As the cameraman pans over the Metro-provided phones, an ominous music plays for some reason, as if they’re in a remake of Dial M for Murder. Eric Adjepong answers his logo-covered cellphone and, lo-and-behold, his wife is on the other end. Other phones start ringing.

Nini Nguyen answers hers and she’s puzzled. “You don’t recognize your mom’s voice?” the person on the other end of the line asked, to which Nini replied “No.” What a great advertisement for the clarity and quality of Metro’s network!

Padma walks through the doors to tell them all to put the phones down, then explains to them that the cheftestants’ loved ones are sitting at an LA restaurant (she does not reveal it’s Osteria Mozza, Nancy Silverton’s Michelin-starred Italian restaurant). This is a fun challenge where the person at Mozza will be served a dish and then they have to explain it so that the cheftestant can recreate it in both taste and presentation.

When I see that Bryan Voltaggio’s sister Staci is a pastry chef in his restaurant, I immediately thought “This is cheating—he’ll certainly win.” Of course, he came in last because they identified the wrong fish when talking. Jennifer Carrol’s sister Jessica thinks she’s eating chicken with fins, but then Jen is able to get her to recognize it’s a fish. Good save, Jen.

The communication is going well with most of them otherwise, recreating dishes much more closely than I would have imagined when Padma first announced the challenge. I immediately honed in on the conversation between our favorite Ginger Beard Kevin Gillespie and his wife. Valerie was incredible. She was calling out fennel fronds, identifying the correct cut of pork to use and distinguishing prosciutto from bacon in the braised beans. This is clearly a chef who has brought his work home with him. He’s had Valerie taste dishes he’s testing, in much the same way I read aloud passages of what I’m writing to my patient wife. I’m thinking Kevin’s spouse is getting a better deal here than mine.

Padma reappeared like a spectral being, wearing gradient tint purple sunglasses for some reason, to announce five minutes remained. That’s when Lee Anne’s mom, Rose, becomes all of us, setting the phone down to enjoy her meal without some kid yapping in her ear. At that moment I turned to my two-year-old son who was, unprompted, barking like a dog while not eating his dinner and I wondered if there was a mute button him too that I could press. When Rose finally picks up her phone again, plate nearly empty, she does give Lee Anne the information she needs to put out the best steak dish anyone made. Rose is America’s new favorite mom.

Ultimately, though, the winner is Kevin, who may owe that entire $10,000 he just won to Valerie.

Nancy wasn’t only going to be the celebrity quickfire judge, she was also sticking around to be the culinary expert judge for the elimination challenge. She’s the queen of LA, so it only seems fitting that she gets to reign over the entire episode.  It was her second time participating in an elimination challenge this season, as she was part of the illustrious panel of LA fine dining heavyweights who passed judgment in the first episode. For those of you who don’t know Nancy or didn’t catch the Chef’s Table episode about her, she’s a food world legend. She was the opening pastry chef at Spago, founded La Brea Bakery, opened the dearly departed Campanile and now owns multiple restaurants in and around LA.

Being a chef today is about more than just cooking in a restaurant. To get ahead, you’ve got to be hustling constantly, and that includes working on brand extensions. For this elimination challenge each of the chefs needed to create a signature product, then cook a dish that showed off their creation. Members of the public got to taste all the dishes and then purchase one of the products to take home with them. The person selling the most won immunity.

Not only was Nancy back for the judging, but each of the loved ones returned to be the cheftestants sous chefs, helping them create their product and their dish. They’re all working hard, but then during prep, there’s a scary moment where Rose started to feel hot and then nearly collapsed, sending the kitchen into a standstill. That’s when other contestants jumped in, including Stephanie Cmar’s husband David leaving her side to help Lee Anne roll out dumplings. Fortunately, after some rest, Rose felt much better and was back the next day to help in the challenge.

Padma, Tom Colicchio, Gail Simmons and Nancy strolled around the mini food festival set-up at a mall in LA to taste each of the products and see how they got deployed. For the most part they really enjoyed what they tried, with even some of the products that may have been a little off still being a component in a delicious dish. It would be a legitimately difficult decision for them for both the winner and loser when they got back to judge’s table.

“It’s a perfectly fine tomato sauce. There are 50 of them on any grocery store shelf at any given moment,” Gail says of Stephanie’s chili base.

Melissa, once again, crushed this challenge with her product selling more than anyone else’s meaning she had immunity. However, she was not in the top three. The judges’ favorites were Gregory’s Pikliz, Nini’s Nuoc Mam and Eric’s calypso sauce.

For each of the winning dishes, there was something deeply personal about the product they were making. Gregory was with his mom, making a traditional spicy Haitian pickle; Nini made a variation on the traditional Vietnamese sauce nuoc mam, taking those flavors and turning it into a glaze that the judges agreed was perfectly balanced—not too sweet and not too spicy; and Eric paired his sauce with “doubles” a fried flatbread that he has since built a fast-casual concept around in Washington DC called On the Double.

Gregory took the win on the day with his perfectly braised chicken and crunch pikliz.

The chefs on the bottom three all had some major flaws to them. Malarkey is once again too clever by half. Last week he thought he should go super simple to win the day and was way too simple. This week he created a muddled relish where some was cooked, some raw and it just wasn’t clear what it should be. Stephanie’s sauce wasn’t bad, it just didn’t stand out at all. It felt like a commodity tomato sauce you could find in any supermarket. And Jen didn’t strain the ginger chunks and lemon peel out of her sauce, thus the texture was off-putting.

Much more so than Jen, it feels like Stephanie and Malarkey are holding on for dear life each week, with the former not being creative enough and the latter unable to edit himself properly. But you’re judged on the dish you put up for elimination that very day. And in this instance, the judges mostly liked Malarkey and Stephanie’s dishes, but found the way Jen prepared hers to muddle the brightness of the sauce, making it dull to eat. Jen, basking in the fact she got to spend time with her sister having fun together while cooking on TV, seemed to be taking the criticism in stride, even as she found out it would send her home.

Our glimpse we see that the chefs will honor the 100th anniversary of the Los Angeles Philharmonic by cooking dinner for Gustavo Dudamel. They’ll have to pair up in teams of two and then face double elimination. But there are not a lot of clues into what the duos will be cooking. However, there appears to be a little salty talk from our favorite Ginger Beard to Nini, but we have no idea what that’s about. We’ll just have to tune in next week to find out!