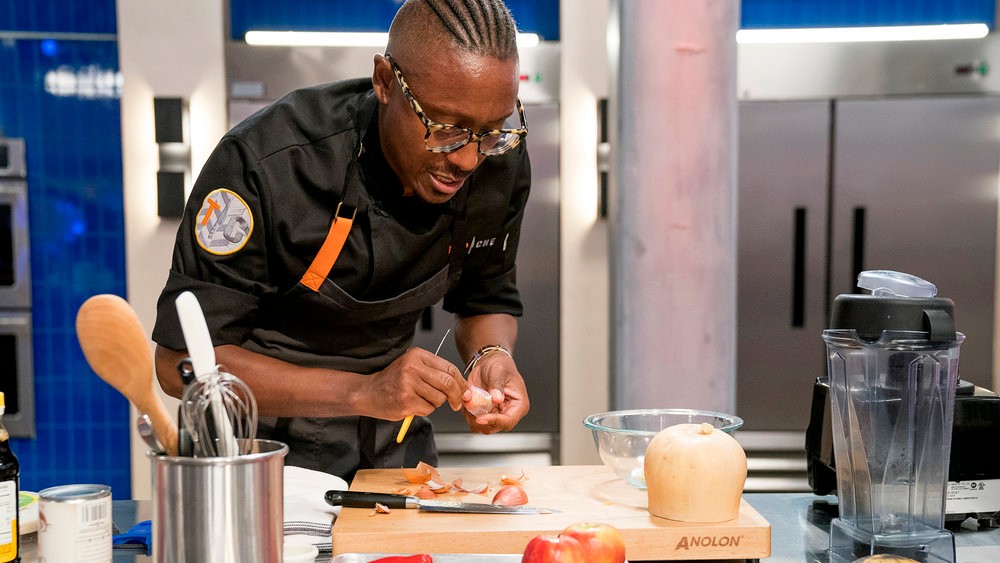 Welcome to the land of overextended metaphors, exceptional cooking and chef Brian Malarkey being a weirdo. As the herd of LA all-stars is culled, we’re clearly getting to a higher class of cooks. None of the people sent home in the previous weeks was truly that surprising, but now we’re getting to the point where outstanding chefs are going to get bounced, and this latest episode was the beginning of that.

But before we dive into the episode, we must acknowledge the least surprising development of the season: Malarkey has crystals. We catch a glimpse of him standing by his bedroom window, bathing in the warm glow of the rising sun; he kisses his pet rocks, feels they are fully charged and is ready to take on the day. I’m surprised we don’t see him burning sage in the Top Chef kitchen before each quickfire.

The cheftestants are greeted by gravel-voiced pizza legend and James Beard Award winner Chris Bianco. In this challenge, the 10 remaining competitors must make a dish featuring flour that isn’t made from wheat. They have numerous options, from almond to tapioca to blue corn. Bianco has his own aversion to flour, because during his heyday he made so many pizzas that all the airborne flour gave him bakers lung. He can still eat flour, he just needed to step away from making every pie each night at the restaurants so he won’t inhale so much of the stuff.

Padma Lakshmi tells the cheftestants there will be no immunity for this quickfire (we’ll find out why soon), but there will be a $5,000 reward for their troubles.

Of course, Melissa King, with her almond flour financier and whipped shoyu butter kills it again. Nini Nguyen draws on her Vietnamese heritage for a rice flour crepe, and Stephanie Cmar tries her hand at some blue corn gnocchi and crosses her fingers. “This hypothetically could work, or it could just explode into a pile of blue poop,” she says.

Not everyone hit it out of the park. Affable flat-brimmed-hat dad Bryan Voltaggio may have made the best dish of the whole bunch with his fish and sweet pea puree, but he failed to really showcase gluten-free flour. And Malarkey, living up to his name, was on some nonsense. He tries his hand at ice cream again, which he actually does well, but then can’t even get his donut on the plate to which he exclaims at the buzzer, face buried in his hands, “That’s the worst dish I’ve ever made on the history of Top Chef.” That’s saying something!

The winner, though, may have had a bit of an advantage. Gregory Gourdet, the ultra-runner whose body is now his temple, has not besmirched his digestive system with gluten in a decade. So he knows his way around some alternative flours. He uses tapioca flour to make a stack of pancakes with blueberry syrup that wows the judges and earns him a cool five Gs that he plans to put toward a Haitian restaurant he wants to open in Portland.

It appears, based on screen time that the conductor of the LA Philharmonic, Gustavo Dudamel, is the guest judge for this elimination challenge. But he is merely the set dressing and the person who leads people to test the limits of the music-food metaphor. The actual guest judge on the night is Dudamel’s kind-of neighbor, chef Timothy Hollingsworth. He owns Otium, the restaurant next to the Walt Disney Concert Hall in Downtown LA where the conductor waves his wand. He is also the winner of a reality TV chef competition, taking the first season of Netflix’s The Final Table. Prior to opening Otium in LA, he was chef de cuisine for Thomas Keller at Michelin three-star The French Laundry.

The reason Dudamel gets so much screen time—well, besides the fact that the Venezuelan conductor and violinist oozes charisma—is that this challenge requires the cheftestants to make dinner for the 60 musicians in the Los Angeles Philharmonic in honor of the Phil’s 100th anniversary. They’ll meet with Dudamel before they create their dishes to get some inspiration from him and the architecture of the Walt Disney Concert Hall.

The cheftestants draw knives and on each blade there’s one of the five tastes: salty, sweet, bitter, sour and umami. Each person will have to pair up with someone who has a different flavor and then make a dish that emphasizes those notes. Nini and Karen Akunowicz pair off immediately, Stephanie smartly heads toward Gregory, Eric Adjepong and Voltaggio decide to bro down together, Melissa and our favorite ginger beard Kevin Gillespie form a super group and that leaves poor Lee Anne to be stuck with Malarkey. Oh well, what could go wrong?

“I hope you’re happy with your teammate, because this is a double elimination,” Padma tells them and Lee Anne contemplates sinking her knife into herself. The tension is evident from the beginning for the duo as the other four teams immediately chat away in their courtesy cars, while Malarkey and Lee Anne sit in silence. Probably just some clever editing, but still very well done.

After their brief sojourn to the concert hall to speak with Dudamel, it’s off to Whole Foods to shop. Brief aside here: Does anyone else get jealous when they see the cheftestants roaming the grocery store and the aisles are fully stocked with toilet paper? If only the ones that came in under budget had the foresight to stock up back then with their remaining cash…

As the groups head into Otium’s open kitchen, they each stake out a position to cook their respective dishes. Lee Anne and Malarkey appear at each other’s throats the whole time, from disagreeing over plating to arguing in front of the cashier at Whole Foods like a married couple that doesn’t give a shit anymore.

Once the plates start emerging from the kitchen, beginning with Stephanie and Gregory’s, it becomes clear the chefs are crushing it. Even Malarkey and Lee Anne are putting up their best work of the season. Of course, this leads to a lot of forced quotes about notes and harmony and balance and blah blah blah blah. It culminates with Karen’s description of hers and Nini’s dish.  “For us, the melody is the broth and the harmony is sort of everything else and we’re hoping that the tomatoes are the crescendo in the song.” Excuse me, 9-1-1? I’d like to report a murder. The cheftestants have beaten this metaphor to death.

It appears though that the cheftestants really rose to the challenge, making food that impressed all the judges, even if there were a few quibbles. Unfortunately, minor quibbles will send not just one chef home tonight, but two.

With five pairs to choose from, it didn’t quite make sense to outright say, “These are the top and these are the bottom teams.” There would be more dramatic tension in slowly telling each team they were safe. It began with ginger beard and Melissa, crushing it with their humble cabbage dish that was anything but. As Hollingsworth said, it merged their two different culinary backgrounds in a harmonious way. Of course, had it been me with sweet and salty, a Canadian bacon and pineapple pizza would have been the order of the day. And victory would have been assured.

The surprising No. 2 was the dysfunctional duo of Malarkey and Lee Anne. Their anchovy hollandaise brought the umami bomb to the party, and it nearly got them the win. And in third place were Gregory and Stephanie, who had a great dish, but put in jalapeno when they didn’t need to. Those six cheftestants were assured of surviving another week.

This is truly one of the closest eliminations I’ve ever seen in Top Chef. Many times, it’s obvious one person is on the bottom or that a couple people sent in subpar dishes and thus someone is deserving of going home. But the judges strained with this one because every team had an outstanding dish that on a different night may actually have won.

“They’re going home for fantastic food, and it feels wrong. It feels counterintuitive to what we do,” Gail Simmons responds. And yet, there must be a loser. Reality TV demands there to be losers among us. Vanderpump Rules has taught me this.

When the chefs come back out to hear their fate, Padma tells them. “Making delicious, beautiful food was the baseline, highlighting the two tastes you had was the order of the day.”

This episode doesn’t come down to whether you made good food, but whether how expertly you executed the parameters of the competition.

For Voltaggio and Eric they nailed it with the bitter, but there wasn’t enough of that crust on the pork in order to enhance the sweetness of the dish.

The fresh whole tomatoes, which were compressed with fish sauce, lime juice, sugar and chile were a delicious bite in Nini and Karen’s dish, but actually took them away from executing umami and sour. With the double elimination, Nini and Karen both take the full and must pack their knives and go.

But…wait…what is that I hear??? Is that Last Chance Kitchen music. Hot damn, one of these two ladies will have the chance to get back in the competition immediately. Don’t back those knives and go just yet Nini and Karen!

Next time, on Top Chef: MACHETE! Movie star, restaurant owner and all-around badass Danny Trejo will judge a quickfire where the knives they have at their disposal are machetes. And for the elimination, Malarkey will embarrass the hell out of himself while pitching a concept for the famed Restaurant Wars challenge.