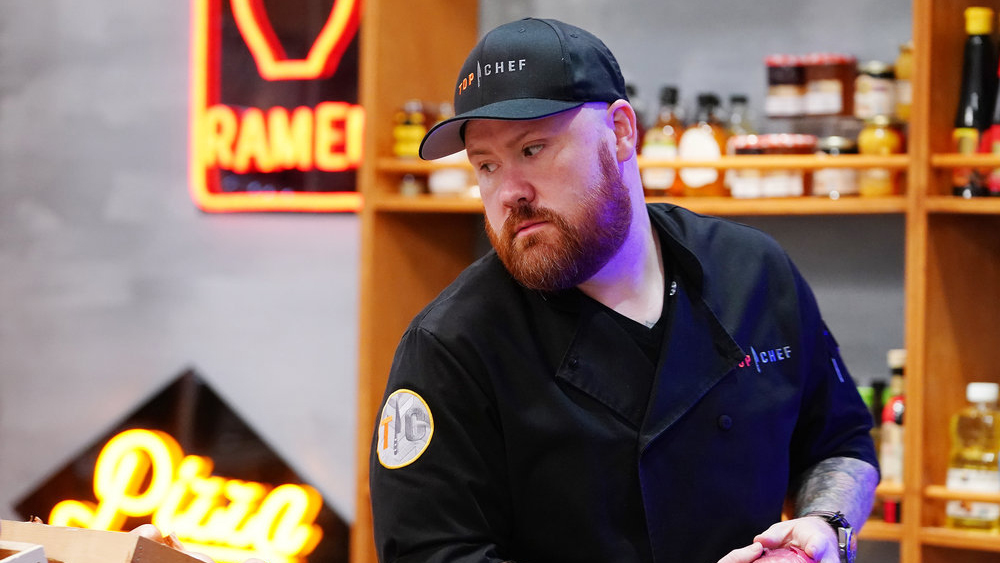 When we left you last week, dear viewers, Karen Akunowicz and Nini Nguyen were done for. They’d cooked an outstanding dish for the LA Philharmonic’s conductor Gustavo Dudamel, but unfortunately a couple of the notes were off. That sent them both into Last Chance Kitchen to fight for an immediate return to the competition. As the cheftestants gathered for their quickfire in the Top Chef kitchen, they wondered who would walk through the doors to join them again. Fans who’d done their homework and watched Last Chance Kitchen already knew that answer. But everyone else had to first watch a BMW product placement before they’d see that Karen was a phoenix rising from the ashes, only to then have to descend right into another fire. Or, quickfire, I guess.

When it comes to Top Chef, it’s nothing but illustrious guests. This time it’s the most illustrious possible: Danny Trejo. The star of many great films from Heat to his titular role in Machete is also a bit of a foodie. Across Los Angeles he has Trejos Tacos and Trejos Donuts.

So for this quickfire challenge, the producers combined the two things Trejo is best known for to let the cheftestants duke it out for the last chance at immunity this season. They had to make tacos, and machetes were the only blades they were allowed to use (goodbye, chefs knives and blenders).

Padma Lakshmi told cheftestants to get cooking, and maybe producers didn’t the think this one through all the way. The chefs rushed as fast as they could TO GRAB GIANT MACHETES IN A CROWDED KITCHEN AND THEN RAN AROUND WITH THEM. I imagine one of Bravo’s lawyers sinking into their couch for a relaxing night of watching Top Chef, only to spit their rosé across the room as visions of the potential lawsuit flashed before their eyes. Fortunately, no one was impaled in the mad dash.

Gregory Gourdet is first in our hearts but last in our taco-making competition, and he knew it. He struggled right out of the gate making his tortilla and was in the bottom along with Eric Adjepong. Eric didn’t put enough food on his big old flour tortilla (which he awkwardly called a “vessel”), and this displeased Trejo, which is the last thing I’d ever want to do.

While everyone else was out there zagging, Stephanie Cmar zigged. Instead of making a fish taco, she went the lamb route and it really stood out to Trejo, giving her the win and all-important immunity. Meaning she’d be automatically advanced to Restaurant Wars. She was going to need it.

Stephanie Izard, the champion from Top Chef Chicago and the first woman to win the competition, strode into the kitchen. She’s one of the show’s great success stories, as Top Chef definitely boosted her career. In Chicago she has opened four successful restaurants: Girl and the Goat, Duck Duck Goat, Little Goat Diner and Cabra. She’s also been working on a new place in LA.

She’s joined at judges’ table by her restaurateur, Kevin Boehm, who along with Rob Katz, leads Boka Restaurant Group in Chicago. Their empire began with the Michelin-starred Boka and has grown to include Stephanie’s restaurants, successful steakhouses and our 2018 Restaurant of the Year, Bellemore, among their 23 properties. Last year, Kevin and Rob were crowned best restaurateurs in America at the James Beard Awards.

This year’s Restaurant Wars got a whole new wrinkle: The nine remaining cheftestants will compete to see which two can pitch the best restaurants and that will determine which concepts we’ll see in the next episode. It’s not all that dissimilar to a chef cooking for potential investors to secure funding. This time Padma, Tom Colicchio, Gail Simmons, Stephanie and Kevin on the judges panel will be that gaggle of investors.

They all had the night to formulate their pitch and figure out which dish or dishes they’ll serve to best represent their concept. The cheftestants returned to the house, and it was craft night. There were fabric swatches, wallpaper and more so they could make their mood boards. I would have preferred them to have to make dioramas complete with mini-action figures representing the chefs, but alas.

As they all took some time off to go bowling together, you learned that the deck is stacked against a few of the competitors. Stephanie, the private chef, has never pitched a restaurant, while Malarkey has opened 18 restaurants in the last five years, Our favorite Ginger Beard, Kevin Gillespie, has done eight and Flat-Brimmed-Hat Dad, Bryan Voltaggio, has opened 10. Here was what they all came up with:

The next day, the cheftestants had three hours to cook and as they toiled away, the panel arrived to sit in judgement of them. Kevin kicked off the proceedings with a Southern restaurant where the spice trade is highlighted. It looked like he had thought of every detail, and he wowed the crowd. Even better, we got to see an old picture of Ginger Beard from childhood, with hair atop his head but not on his face.

It’s less of a good time for Eric, who was so completely in the weeds that Lee Anne and Voltaggio drop what they’re doing and help him plate his dishes. He wanted redemption for the African concept he was riffing on in last season’s finale when he was eliminated, but his idea was muddled and his execution was flawed.

Gregory nailed it with his woodfired Haitian restaurant; Voltaggio’s Mid-Atlantic dishes were delicious, but more formal than his concept; Karen’s dim sum fell flat; Lee Anne’s seasoning was off and concept too unclear; Melissa had the makings of an elegant Michelin-starred restaurant; Stephanie’s restaurant was named after her dog and makes food you wouldn’t even want to serve it; and then there was Malarkey. Padma cringed as he took the stage. Malarkey turned his board around, and it looked like a sitcom character explaining his far-ranging conspiracy theory. Surprisingly, his pitch for a millennial-focused fusion restaurant won them over.

“Is it a non-concept concept?” Kevin said of Stephanie’s pitch. “Maybe she should have named her restaurant immunity.” Oh, Kevin, you delightful bastard.

As Ginger Beard pointed out earlier in the episode, Gregory, Kevin and Melissa have been dominating this season, with at least one of them winning every elimination challenge. It’s no different this time around, as those three were on top, along with Malarkey’s fusion concept.

Kevin’s Country Captain and Gregory’s Kann edged out the other two, setting the table for next week’s action packed episode.

Eric, Lee Anne and Stephanie were called to the principal’s office. They called Stephanie over, even though she had immunity, because her neighborhood restaurant concept was that underwhelming. It was so bad, Kevin and Tom were laughing at her at judges’ table. Ouch.

Without immunity, it seemed like Stephanie would have gone home. But she was allowed to rejoin the safe group, while Eric and Lee Anne had their concepts picked apart. Each went into the elimination challenge with solid starting points, but failed to have a cohesive vision. Lee Anne’s Hawaiian concept was a bit overbroad, and her cooking didn’t deliver on this occasion.

But Eric’s pitch of a restaurant based on the Atlantic slave trade really lacked clarity and consistency, and he knew it, apologizing to the judges and looking on the verge of tears as he stood in judgement. “Eric, you say you want something casual and accessible, but then the food was really upscale,” Tom told him. It’s curtains for Eric.

Padma told him to pack his knives and go for his failed upscale concept. However, there’s a silver lining for Eric, which is that he DID create a winning concept during his time on Top Chef. His doubles from episode five that the judges loved became the basis for a fast-casual place he opened in Washington, D.C. earlier this year.

The two greatest words in Top Chef lore: RESTAURANT WARS. Next week, Gregory and Ginger Beard’s concepts will square off against each other to see which reigns supreme. And next week’s guest judge will be none other than me. Ok, so I’m not next week’s guest judge, but I was one of the diners at Restaurant Wars, so let’s see if one of my quips wins next week’s Burn of the Week™.