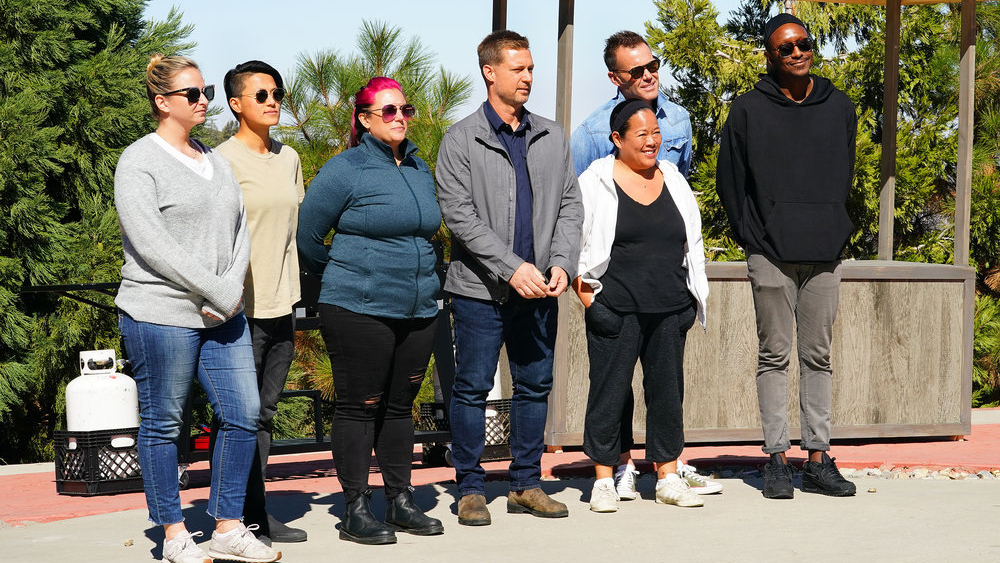 I’m tired. You’re tired. We’re all tired. Being locked in a confined space with the same people has taken its toll (we’ll really going to find out if my wife reads these now). Freedom, sweet freedom is what we need. In the wake of “Restaurant Wars” it seems like the chefs are feeling the exact same way. More than half of the cheftestants have been culled and the exhaustion and stir-craziness is setting in with the remaining crew. That’s going to lead to some mental mistakes in this episode that seem uncharacteristic to this veteran group.

The gang rises the day after “Restaurant Wars” and has to drive nearly 100 miles out of the city to a wooded camp called Pali Mountain Retreat. Remembering the freezing conditions and altitude the last time she competed in Top Chef, Lee Anne Wong says she’ll make sure to pack some warm pants and extra underwear. Always good advice.

Perched above the pines they’re surrounded by grilling stations and Top Chef Kentucky winner Kelsey Barnard Clark is back one season after her victory to stand in judgement for a change. She tells the cheftestants that—holy sponsored content, Batman—they’ve got to make a grilled dish with Bush’s Baked Beans for the chance to win 10 grand.

Stephanie Cmar, as if setting the tone for the episode’s energy level and chef enthusiasm admits, “I don’t know if it’s the elevation or I’m just brain dead, but nothing is coming to mind. Like crickets,” she says. Cmar makes some crazy vegetarian bean burger that in no way resembles a burger. No cash for you, Stephanie.

Flat-brimmed-hat dad Bryan Voltaggio cooks something tasty, but as per usual with quickfires, he doesn’t quite follow the letter of the law of the challenge and thus winds up on the bottom too. Brian Malarkey grabs some old brush and throws it on the grill. Karen Akunowicz coaxes maximum flavor out of some ham for her soup. Gregory Gourdet smartly fries up some beans for some crunch.

Melissa King struggles with her bean-stuffed fry dough dumplings with dough made from beans. To determine which of her final products she’ll serve she says, “I just picked the ones who looked the chubbiest.” Where were women like Melissa when I was a portly lad in high school?

Lee Anne made a Cuban black bean empanada that really looked delicious. It was like a big, crispy hand pie and she was ecstatic when she found out that she’d finally won a quickfire along with $10,000 from the beloved bean sponsor.

Brooke checks in on the chefs.  Photo: courtesy Nicole Weingart/Bravo

Another former winner makes an appearance, this time it’s Brooke Williamson, the runner-up from Top Chef Seattle and the winner of Top Chef Charleston. She lives in Los Angeles, owning multiple restaurants on the city’s west side.

The cheftestants aren’t alone in the wilderness. At the Pali Mountain Retreat they are joined by 200 moms from around the country who have a weekend away from the kids. And they’ll have to make a Sunday brunch buffet for them, where each cheftestant cooks two dishes.

“There are a lot of us moms here living off of stale Cheerios, so make sure you create an impressive buffet,” Kelsey tells them.

The next morning, they’ll have just four hours to prep and cook before service starts at 9 AM, so the chefs will be waking up before the crack of dawn to start their work. At least Padma Lakshmi gives them the day off.

The spend their time with ziplines, archery, throwing axes and grilling up a spread for each other with more food from sponsors. Off to bed early for the crew, but unfortunately this group of moms, free from the constraints of family life, partied hard into the night, making it tough for the cheftestants to sleep. Lee Anne barely caught a wink before having to wake up at 4 AM.

To make matters worse, there’s no shopping at Whole Foods for this challenge. They have to use whatever bulk crap is in the mess hall. It’s not good. “This is sketchy at best,” Gregory says as he sees how few ingredients there are at the camp for them to cook with. That leads to the crew wheeling and dealing over who gets to use which ingredients. “This is straight-up Hunger Games,” Melissa says of the negotiations. “I’m happy taking whatever is leftover.” That attitude does not serve her well.

Tom Colicchio makes an appearance early, doing his usual kitchen walkthrough that has been noticeably absent most of this season. He finds Lee Anne and essentially gives her the kiss of death: “You do a brunch restaurant, so this is right up your alley.” Girl, you’re in danger.

Meanwhile, Malarkey, in a silly hat, is mad because everyone just went up and grabbed a station on the buffet line and didn’t leave any space for him. You get the sense that a lot of the chefs are off their game, uncertain of their dishes and having to change on the fly.

The moms and judges arrive and Tom is the only man to be seen. He takes it in stride. “This is my fanbase right here. This is it,” he quips.

Many of the moms in attendance seem like big Top Chef fans, geeking out over seeing their favorite cheftestants, like the moms fawning over Voltaggio and his affable dadness.

“Has anyone had this donut yet?” Tom asks, before rolling his eyes and rubbing his face with both hands as if he’s trying to massage away any memory of having eaten it.

In the top were Karen, Voltaggio and Gregory. The judges and moms loved the corn cake that Karen made, finding it to be the perfect mix of salty, sweet and crispy. Gregory was supposed to have an egg on his mushrooms and when that looked like it was going to fail, he pivoted quickly to spinach and saved his dish. And Voltaggio took his sweet time to make his coriander carrots and pork belly, but he delivered restaurant quality dishes in a buffet line at 9 AM. For that, our favorite flat-brimmed-hat dad had his first victory of the season. It’s the first time this season that the winner wasn’t Gregory, Kevin, Melissa or a team that had one of those three people.

On the bottom this week were two people used to being cellar dwellers—Lee Anne and Malarkey—and Melissa, one of the absolute stars of the season.

You could tell the exhaustion because not one of the three people put up a fight. Melissa acknowledged her salad wasn’t good as Gail called it a throw-away dish. Malarkey realized the mistake of his soup with the frozen shrimp releasing a bunch of water into the broth to dilute the flavor. But Melissa and Malarkey each had stellar second dishes while both of Lee Anne’s failed. Her donut was dry and greasy and her clafoutis was cooked with the oven’s steam setting on, making it dense and leaden.

“These are mental mistakes, these aren’t cooking mistakes,” Tom tells Lee Anne, who is doubled-over in pain and embarrassment.

She packed her warm pants and extra underwear, now Lee Anne needs to pack her knives and go.

Because Bravo is an NBC property, this next challenge looks pegged to promoting the Olympics in Tokyo next year as they’re serving Japanese food to Niki Nakayama, Carole Iida-Nakayama and Olympic athletes. The 2020 Olympics are canceled, but Top Chef must go on.