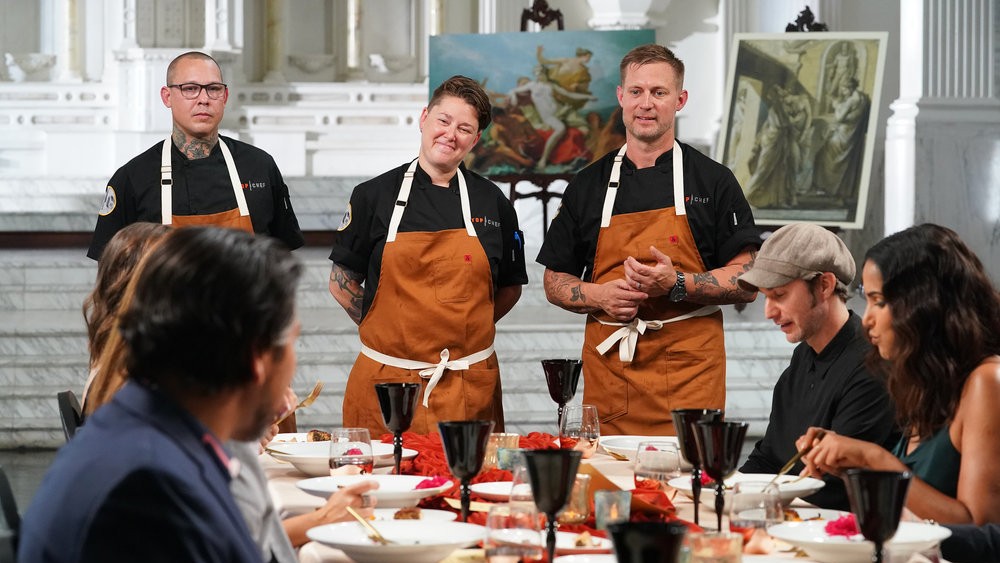 It was an emotional journey on the latest episode of Top Chef. Not so much for us, the viewers—we were largely bored—but James Beard Award-winning chef Karen Akunowicz was pretty blunt about how being on this show messes with someone’s head. “The last time I was on Top Chef and I got kicked in the face all the time, I thought I was a piece of shit,” she confessed to the camera. “It ruined me for years.”

Later, as guest judge Ludo Lefebvre wound his way through the prep kitchen, he saw Brian Malarkey and they shared a big hug. Malarkey talked about how he, Ludo, Anthony Bourdain and Nigella Lawson had hosted an ill-fated competition show together called The Taste. Ludo almost seemed a little surprised to see Malarkey there, giving him a look of “why are you doing this to yourself?” For some of these chefs to come back—especially the ones who’ve had real-life success like Karen and Malarkey—it’s a bit confounding to see that they’ve returned, but at the same time you get that they have a chip on their shoulders to prove something to themselves and to the world of gastronomy.

In an All-Star season like this, where chefs are a bit more seasoned (pun intended!) and have a little more perspective on their lives, they seem, as they did in this episode, to understand their shortcomings and even own up to their mistakes like adults. And that’s too bad. Because while self-awareness can make for better human beings, that doesn’t make for better reality TV stars. You kind of felt it on this episode, which lacked the petulance and tension that can make a TV competition more entertaining.

Ali and Randall met a big fan of theirs.  Photo: courtesy Nicole Weingart/Bravo

The episode actually starts well, with the effervescent duo of Ali Wong and Randall Park coming in to judge the quickfire. It makes sense, as theirs is a relationship rooted in food.

“When I was a student at UCLA, I cofounded an Asian American theater company and one of our members would hold an annual fried-rice competition,” Park says. “Ali actually entered the competition. Didn’t win . . .”

“No, and I’m actually still very bitter about it,” interjects Wong.

Wong and Park were there to tell cheftestants they’d be in a fried-rice cooking competition too. They’d have 30 minutes to create their take on fried rice out of ingredients curated by the actors that ranged from frog legs to Flamin’ Hot Cheetos. It’s what you’d imagine a French stoner’s dorm room would be stocked with.

This quickfire was the season’s first immunity challenge. Jamie Lynch, who stupidly gave up his immunity in his season, leading him to be sent home, joked he wouldn’t give up immunity if he got it this time. Folks, that’s what we call foreshadowing.

Karen was briefly buoyed by the judges liking her Indonesian fried rice dish, nasi goreng; she came back down to earth when Kevin Gillespie’s stoner stir-fry of wieners, bourbon and Cheetos won the day. Our favorite Ginger Beard had another victory under his belt and all-important immunity for the challenge.

Ludo Lefebvre, the quintessential French chef, is so full of swagger, a touch of arrogance and an accent so thick it occasionally requires subtitles. A good choice for a judge, really. Born in Burgundy, he worked under some of France’s greatest chefs, such as Pierre Gagnaire and Alain Passard, before heading to LA. He has built his mini-empire with his two bistros: Petit Trois and his Michelin-starred, tasting-menu hotspot Trois Mec.

The top-performing team of the episode  Photo: courtesy Nicole Weingart/Bravo

Right after the quickfire, 12 of the 13 chefs drew knives to find out how they’d divvy themselves up for the elimination challenge. Each blade was labeled with one of four eras in art. Here’s how it shook out:

For the challenge, they had to go to the Getty Museum, study their respective art movements and then create a dish based on what they learned. After the tour, they’d have 30 minutes to shop, then it was time to work. The best dish from each group would be up for the win, and the worst would be in consideration for being bounced. And because Kevin won the immunity challenge, he also got to pick which of the four groups to join, and he chose Neoclassicism.

We get a little montage of the gang touring the Getty and Melissa reminiscing about her first cooking job, which was at the museum when she was 17 years old. More foreshadowing! They all then walked away with a vague idea of what they’d do for their dish. And while it seemed to push some of the chefs out of their comfort zone to look for inspiration this way, it didn’t seem to actually make for interesting food as many seemed pretty caught up in their own heads (Not Lisa though: she assured us the prunes keep her from being backed up.)

For Jamie and Lee Anne, they knew before the plates even landed on the judges’ table that they’d put out a poor effort. I mean, Malarkey was compelled to say, “Lee Anne has a lot of prep to do and more is not better, and that’s me saying that.” While Jamie didn’t even get his jus on his chicken that he’d serve to a Frenchy. Sacrebleu.

A crop of accomplished LA chefs were arrayed around the table, starting with Ludo, then adding Craig Thornton of Wolvesmouth, Ray Garcia of Broken Spanish and Sarah Hymanson and Sara Kramer of Kismet. They were polite but seemingly not that impressed by the food presented to them. It all felt a little flat as the 13 courses came out. But it seemed pretty clear who was on top and who would be on the bottom once judges’ table came around.

In the world of reality TV competitive cooking, sometimes it gets a little too hot. Here’s the most scorching take delivered this episode:

“I think a couple of our chefs got distracted by the art and forgot the art of cooking.” —Padma Lakshmi

Honestly, that the above line was one of the better burns of the week tells you this wasn’t that compelling of an hour of television.

Malarkey, Voltaggio, Eric and Melissa were the top four on the day.

Malarkey was able to edit himself with his fish and French curry; flat-brimmed hat dad, a.k.a. Voltaggio, continued to show his mastery of flavors; Eric made a steamed fish dish that Gail Simmons swooned for, and Melissa’s lobster wonton in a shellfish broth had Ludo exclaiming it was a Michelin-starred dish.

The winner this week seemed clear from the effusive complements, as Melissa notched a big victory.

There were suppressed tears as Lee Anne and Karen found themselves on the bottom along with Stephanie and Jamie. “It’s very brown. I wish my plates were more beautiful,” Karen confides to the camera.

As they gathered to take their medicine from the judges, Padma paused for a second to let Ginger Beard Kevin know, a week removed from winning an elimination challenge, he may have had the worst dish of the night, but immunity saved him.

Stephanie had good elements, but she undercooked her pasta; Lee Anne’s duck-and-egg dish was all over the map; Karen’s chicken was muddled; and Jamie served an overcooked slab of chicken with no jus. Serving chicken with no jus to a French chef is a mortal sin.

Jamie, pack your knives and go.

On the next episode, we see a clip of the cheftestants getting entirely too excited to see Kelly Clarkson. Maybe there’s some sort of camaraderie among reality TV contest winners I don’t understand. Anyway, the cheftestants will have to cook a vegetarian menu, and it appears there’s some friction between Malarkey and Lee Anne, where she’s left exasperated and exclaiming, “Do you see the bus tracks on my back?” Petty sabotage? That’s the kind of drama I want.