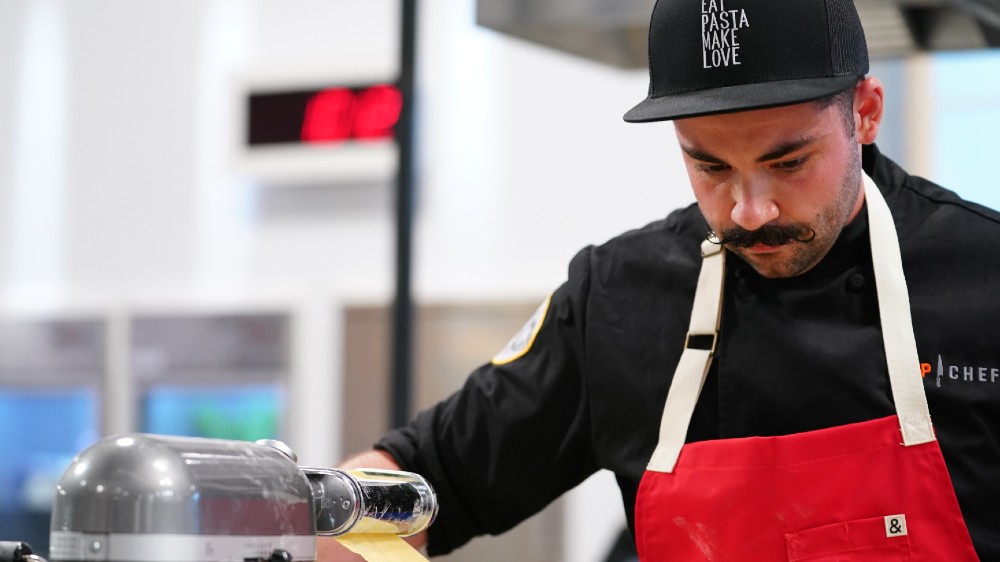 “So which one of you said you would never do this again?” Top Chef judge Tom Colicchio asked a line of 15 cheftestants perched high above Los Angeles at the Griffith Observatory. Thirteen hands shot up to into the California blue sky. And, yet, here they all are again, contending on reality TV’s premier cooking competition  (sorry, Kids Halloween Baking Championship). This season features All Stars from previous years who came oh-so-close to Padma Lakshmi declaring them Top Chef, but fell short. This is their time for redemption, even if they kind of hate that they’re doing this to themselves again.

This year’s cast includes some faces we haven’t seen ’round these parts in a while, like Brian Malarkey from all the way back in season three, Lisa Fernandes from season four in Chicago and that ginger-bearded Southerner Kevin Gillespie who competed in Vegas a decade ago. There’s also a sprinkling of recent faves like Mustache Joe Sasto, Gregory Gourdet, Melissa King and Karen Akunowicz, who won a James Beard Award since appearing on Season 13.

The beauty of an All Star season is that there’s no strained collection of early episodes, where you have to calculate how worthy certain contestants are of your emotional investment. Heading in you already have some rooting interests picked out and can immediately start slandering the chefs you’re cheering against. It’s all very sporting. Also, you have some assurance of quality, knowing that the season won’t shake out as a collection of banal chefs that will bore you with their food along the way [stares in the direction of seasons five and seven]. This, mercifully, is a quality crop of cheftestants to watch during quarantine.

The first quickfire of the season was, fittingly, a return of a fan favorite: the mise en place challenge. How well can these seasoned pros still do prep work? Some, admit, that this is “PFTS” tasks as in they have “People for that shit,” meaning they’re not spending their hours brunoising onions. Rust was obvious. The chefs had to turn artichokes, segment oranges and crack almonds without damaging the nut. Let’s show off those knife skills, people! The five who prepped the artichokes fastest formed a team and got extra time to cook their dishes featuring those three ingredients. That extra bit of time was enough to give a needed boost to Sasto, Gillespie, King, Bryan Voltaggio and Jamie Lynch (who, like Mustache Joe, didn’t raise his hand when Tom asked about whether they’d promised themselves to never return. Masochists, apparently).

As they got the kitchen to cook, each squad of five had to create two dishes for the judges to try. Of course, Mustache Joe made a pasta during the quick fire, his signature skill, to the amusement of all involved. “Don’t empty all the bullets in your chamber, young man,” the judges seemed to implore him with their guffaws and incredulous stares. The pasta kind of stunk, but no matter, that fivesome’s other offering—a grilled artichoke with sumac, yogurt and tahini—was the best of the six dishes the judges tried. Victory was theirs, and so was another advantage: They each got to be captains and handpick their two teammates for the elimination challenge.

So the elimination challenge teams shook out as such:

But before they went to compete, first a bit of time to relax in their new home: a palatial manse in the Hollywood Hills that’s incongruously filled with bunk beds like some sort of junior high sleepaway camp…

That’s when producers took a little time to reacquaint us with our old friends. Thus, we got old clips of them from the seasons from whence they came. The best flashbacks to Judge’s Tables of yore revealed the petulance of youth and the tragedy of mid-aughts fashion. It was 20-something chefs getting snippy with Tom’s critiques while sporting fauxhawks and pant legs so wide you could drive a food delivery truck through them. It was an era when Tucker Max books flew off the shelves and America Idol contestants crammed onto the Billboard Hot 100. My god, what a tacky time to be alive.

If the pressure of competing again wasn’t enough, the judges this week were a doozy. They’re what cheftestant Jamie billed as a “finale panel,” that is, a group of guest diners esteemed enough to be judging the competition at the bitter end—a veritable murderer’s row of culinary luminaries showed up to feast and render verdicts. Along with icons Jeremiah Tower and Marcus Samuelsson, the episode featured LA’s fine dining heavyweights with James Beard Awards and Michelin Stars aplenty gathered around the table. There was Providence’s Michael Cimarusti and his resplendent beard, Suzanne Goin and Caroline Styne the power duo behind Lucques, queen of LA Nancy Silverton and Josiah Citrin of the recently reborn Mélisse.

The challenge was beautiful in its simplicity: Head to the beach, take some seafood, take some fire and make something good. No electric, no gas, It’s just chefs vs. nature. The five teams of three all seemed to get along well and help each other out, avoiding the messy drama that can make the show more fun. Also, early in the season, it’s tough to get too into the weeds with people cooking because so many dishes are happening simultaneously. The 15 preparations breeze by pretty quickly without much time to consider them individually.

But early on, the producers were sowing the seeds of the losing chef’s downfall. Malarkey’s comment about how when he was a younger chef, he’d pile too much on the plate like Mustachio Joe was doing with his flatbread, was the episode’s Chekov’s gun. The subpar flatbread was loaded with clams, fried garlic, pickled peppers, uni and miso-parmesan aioli. The young buck was simply doing too much. Oh, the folly of youth.

But Mustache Joe wasn’t the only one on his team screwing up. Lee Anne made a total rookie mistake, dumping oil directly on to the flames as Brian—who reminds us he owns a woodfired restaurant—looked on in horror. It charred the hell out of her halibut, adding an unappetizing layer of soot to her fish that no amount of triage could cure.

There were plenty of great dishes on the day. Jen, a longtime employee of Eric Ripert—one of the best seafood chefs in America—had a great challenge making a spiced tuna loin with grilled kale and roasted tahini that Tower and others swooned over. (Meanwhile her teammate Kevin, an early favorite for the overall title, put up a swordfish that Cimarusti said “It delivers visually, but it’s a disaster.” Ouch.) Other standouts included Gregory’s charred salmon with grilled peaches that caused Silverton and Cimarusti to turn to each other and whisper how much they loved it.

Gregory’s teammate Jamie made steamed mussels with an ember-scaled cream and Stephanie, the Boston-based private chef with something to prove, served a brined prawn with a charred tomato and corn accompaniment. This is the team that carried the day, with Gregory’s unexpected peach-salmon combo making a doubtful Tower a true believer once he tasted it.

After the winning team was given its plaudits and shuttled aside, all the judge’s table smiles turned to furrowed brows to call over Brian, Lee Ann and Mustachio Joe to answer for their crimes against gastronomy. Brian, though his dish a bit uninspired, was pretty obviously safe. Tom, the ever-gruff-but-supportive dad, interrogated the chefs and took issue with about everything going on with Mustachio Joe’s dish. When Joe said the aioli was like a glue for the dish, Tom, wearing his best cabana wear, shot back, “Glue is not a good word when it comes to food!” Everyone agreed, per Brian’s earlier assessment, that the flatbread simply had too much going on. “There were too many ideas crammed onto one piece of bread,” papa bear Tom said. “That’s something I’ve always struggled with—that editing process,” Mustache Joe solemnly agreed.

Padma uttered her famous words telling Mustache Joe to pack his knives and go. So as the sun set over the Pacific, and the chefs retired to their mansion-meets-summer-camp, they left the beach down one twirly mustache.