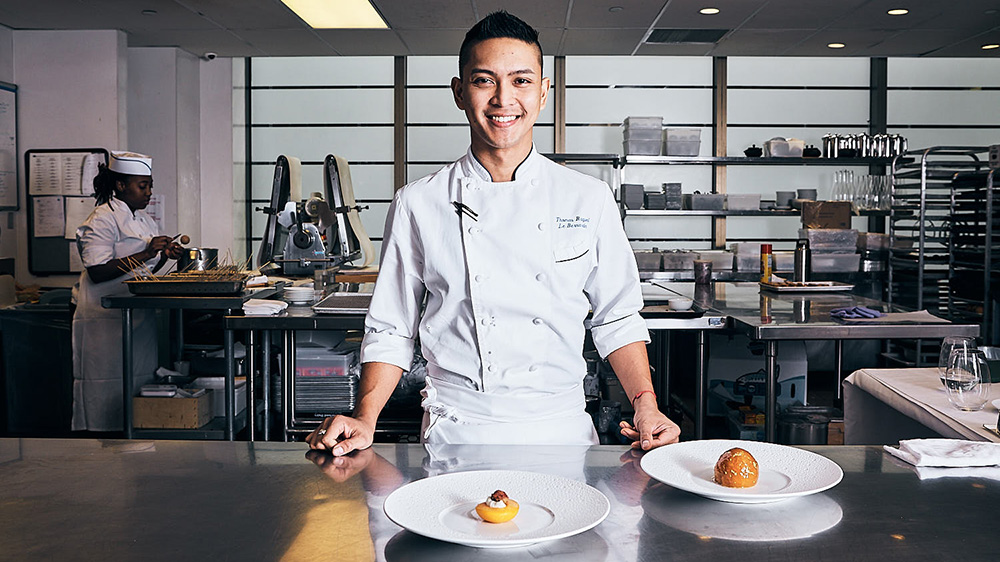 “It’s really sad about the peaches,” says Thomas Raquel, Le Bernardin’s executive pastry chef. He’s seriously disappointed. Last April, in preparation for this story, the chef tried to secure a perfect peach to prepare the exquisite dish you see on this page. But spring isn’t peach season in the US, so he struggled. “If there was a ripe peach in New York City to be found, I would have it,” he says, and even the two batches he sourced from Chile weren’t good enough. In season, he procures his precious peaches from Frog Hollow Farm in Westport, Mass., which, after scouring dozens of producers, he declared the very best. Raquel’s uncompromising quest for the finest ingredients is one of the reasons chef Eric Ripert hired him five years ago (at just 27) at his Michelin three-star restaurant, for what’s considered to be one of the most coveted pastry-chef jobs in the world.

Raquel hasn’t disappointed. His imaginative desserts (each starts with a pencil sketch on paper) have captured the attention of thousands on Instagram. He found his calling at 16 when he enrolled in the California School of Culinary Arts in Pasadena, convincing his anxious parents that it was just a short break before pursuing a medical degree. He quickly developed a love for desserts (extinguishing any lingering hopes of a medical career) and is now famous for his artful fruit creations, rooted in science and requiring endless experimentation. His latest, the Peach, debuts on the menu this month, with the stone fruit made only sweeter, juicier and more fragrant through his delicate manipulations, which he shares below. It’s a signal that summer has arrived.

The dish starts with a flawless fruit: It’s blanched in boiling water for 10 seconds so the skin falls off; immersed in quicklime, which reacts with the fruit’s pectin to form an exterior seal and roasted in a 220-degree oven for 45 minutes. Next, Raquel extracts the pit carefully, with tweezers, to keep the fruit’s shape.

Raquel made silicone molds from real peach pits to create the almond-praline-and-white-chocolate version you see here, which is filled with a candied Marcona almond.

The nutty pits are dusted with freeze-dried raspberries to enhance their mimicry and flavor.

Every dessert is accompanied by several components that enhance the various flavors, textures and colors of the centerpiece, and the peach comes with a delicate pistachio brioche.

The roasted peaches are coated with a glaze of verbena and simple sugar and appointed with gold leaf because “Eric [Ripert] says gold leaf is healthy,” Raquel explains with a laugh.

The peach is sliced, topped with whipped yogurt and the candied pit, and served with the pistachio brioche and a raspberry granita. “The beauty of this dessert is that it’s so pure.” What’s the best part of the job? “Seeing your vision come to fruition on the plate.” And he admits he still gets excited when he sees his name on Le Bernardin’s menu.