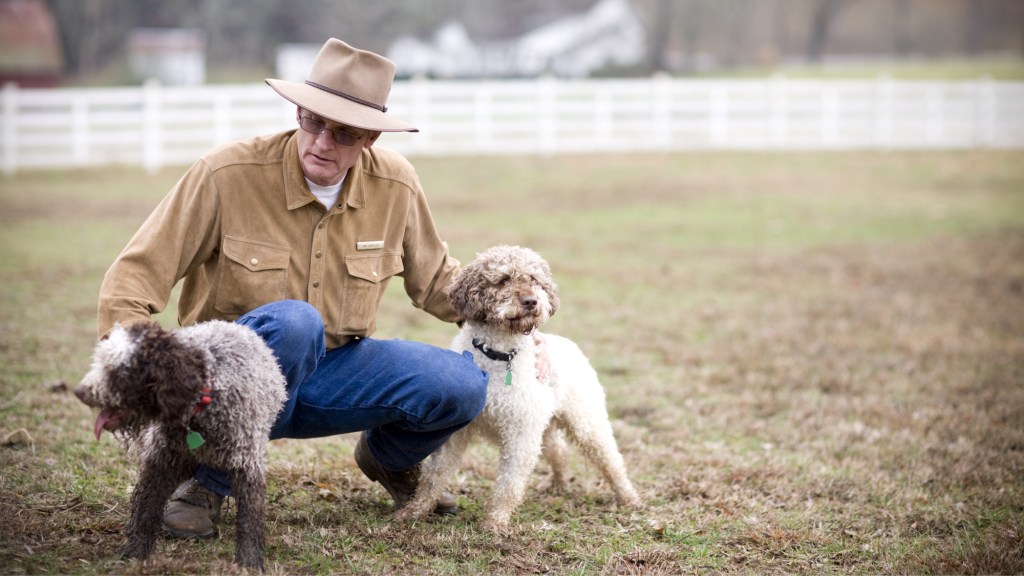 When Jim Sanford was first approached by his boss at Blackberry Farm in Walland, Tennessee, about training a dog to sniff out truffles, Sanford was confident that he could deliver. There was just one problem: “I can teach a dog to find anything,” he said, “but what’s a truffle?”

Today, Sanford is one of the world’s premier trainers of truffle dogs and a renowned breeder of the lagotto romagnolo, a breed that has been used to find truffles in Italy for centuries. He’s also developed a sophisticated palate for the famed fungi that a few years ago he knew nothing about.

Prized for the pungent and powerful flavors when shaved over dishes, truffles have a perennially high demand though supply remains consistently low. What saffron is to spices, truffles are to fungi. They have become an extremely valuable commodity; in 2007, casino magnate Stanley Ho paid $330,000 for a single, 3.3-pound white truffle at an auction.

Why Good Truffles Are Hard to Find

The reason for the low supply is that a truffle never pops its head above ground, so finding one can be a bit of a treasure hunt. But merely locating a truffle isn’t enough. It has to be extracted at peak ripeness; otherwise, it is essentially worthless. Unlike other crops that continue to ripen after being picked, an unripe truffle has no odor and no flavor—and never will after it is removed from the ground.

That extraction is where Sanford and his dogs come in. Hundreds of years ago, female pigs were used to hunt truffles because, as scientists have recently discovered, there are chemical similarities between the aroma that a truffle gives off and the sex pheromone emitted by a male pig’s saliva. But truffle foragers are an understandably secretive lot who don’t like to advertise where their stashes are located—and, well, a man walking down the street with a pig is going to attract some attention. So, eventually, foragers learned to train the lagotto romagnolo to lock in on the scent of a truffle so they could move about more discreetly.

Of course, the lagotto romagnolo isn’t the only dog with a good sense of smell. “If you go to an animal shelter and point to a dog, there’s a good chance that dog could be trained to find a truffle,” says Sanford, who attends truffle festivals where he helps average pet owners train their dogs for the task. “But the lagotto romagnolo is a breed that goes back hundreds of years in northern Italy, which is the greatest truffle-bearing region on earth. If you have a breed that has been used for [hunting truffles], then they will have offspring that are born with an affinity for that.”

Sanford first received a lagotto romagnolo in 2007. Soon after, the owner of Blackberry Farm—a luxury hotel and resort in the foothills of the Great Smoky Mountains in eastern Tennessee—was approached by a man who lived about 100 miles away claiming to have figured out a way to cultivate the black perigord truffle. After verifying the legitimacy of the truffles, Sanford—who had previously spent 20 years as a professional elephant trainer—was tasked with training the dog to find truffles on the man’s property so that the truffles could eventually be put on the menu for guests at Blackberry Farm.

After a few weeks of training, Sanford began making the trip to walk around the trees with that first dog (whose name was Tom) to look for truffles. In 90 days, Tom found 200 pounds. With a retail price of about $1,000 per pound, needless to say, the property owner was very happy with Tom’s work.

Sanford subsequently set about creating a lagotto romagnolo breeding program at Blackberry Farm that now includes two males and six females, which give birth to about 24 puppies a year. The majority of the puppies become pets that are sold exclusively to guests of Blackberry Farm for $8,500, which includes training and delivery from Sanford. (There’s currently a 4-year waiting list.) But for the truffle-finding dogs, Sanford still uses the same training technique he used for Tom a decade ago.

Training Dogs for the Hunt

First, he creates what he calls “scent tubes.” These 2-inch pieces of PVC pipe are filled with cotton balls and injected with truffle oil through holes drilled into the pipe. From there, it’s a three-step process. Step one involves imprinting the truffle scent. Sanford presents the tube to the lagotto romagnolo; when the dog smells it, Sanford immediately puts a treat in its mouth. This teaches the dog that this particular scent will earn it a reward. The next step involves having the dog wait inside while Sanford hides scent tubes under piles of leaves outside. Once the dog is let outside and smells the tubes under the leaves, Sanford again rewards it.

The final step is the most critical. Because truffles are buried underground, “I need the dog to give me an overt signal that says what you’re looking for is right there.” To that end, Sanford buries the scent tubes underneath the ground near a tree because that’s where truffles are always located. When the dog acknowledges it, Sanford doesn’t reward it. Instead, he points to the ground, asking, “Where is it?” Eventually, the dog learns to paw the ground at the location where the tube is buried. Then, Sanford moves the dog away and carefully digs up the tube (and in real-world scenarios, the actual truffle). Only after Sanford has extracted the truffle does the dog receive a treat.

It takes Sanford a couple of weeks to get the mechanics down, but the key is for the dog to be in a truffle-rich environment like the Pacific Northwest or the Southeast so that it can get real experience. “It’s like If you teach a dog to go duck hunting but you only use decoys, he’s never going to be a good duck dog.”

For Sanford, all the work that goes into training the lagotto romagnolos is rewarded with a unique bond. After a lifetime spent training animals, Sanford has developed a certain stoicism to the fact that he will outlive them. But then Tom passed away—Sanford instantly recalls the exact date: June 20, 2015. “It cut my knees off. I’ve never been affected that way before. It’s definitely a strong relationship.”

And no matter how expensive truffles may become, that relationship will always be the most valuable thing that a lagotto romagnolo provides.