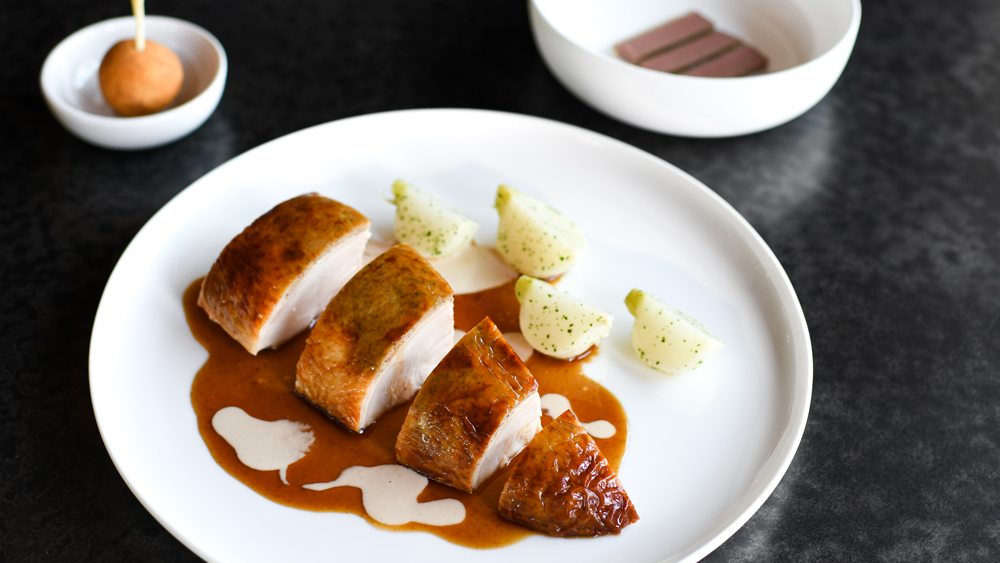 When Michelin two-star chef Erik Anderson took on an all-day menu at Truss, his new concept in Calistoga, Calif., he gave himself a challenge.

“One of my goals was to try to serve caviar at every meal here, period,” he said.

That means no matter what time of day you visit Truss Restaurant + Bar Living Room, opening Monday, Nov. 1, at the Four Seasons Resort and Residences Napa Valley—be it late night, dinner, cocktail hour, lunch and, yes, even breakfast—you can get caviar.

For the morning spread, Anderson has prepared a tartine with his private label Truss white sturgeon California caviar, featuring scrambled eggs, cream cheese, caramelized onions and smoked sturgeon. It’s a lighthearted yet indulgent way to start the day and a window into the mind of a highly acclaimed chef who has a lot more to show.

“My heart is always in fine dining, but it’s been a lot of fun to create these menus that are a little more playful and definitely more approachable,” he said. “The food can look simple, but it’s deceptively not simple. There’s a lot of steps that we take to get to that point”

A fine dining component of Truss is still to come—called the Restaurant, it will offer a chef’s table, tasting menu option—but for now, the casual Living Room is where Anderson is concealing his meticulous technique in bar-type food like burgers, pizzas and salads. He’s not taking liberties with classic dishes, he’s adding extra, deliberate steps to their preparation, making them special without taking away their spirit.

For the caviar service, for example, he smokes the crème fraiche and makes a complicated version of egg mimosa (sieved hard-boiled eggs): He separates the yolks and the whites, spherifies them and then gently mixes them back together. He spent nearly three weeks perfecting the pizza crust alone.

Any time of day, it’s yours.  Photo: courtesy Bonjwing Lee

“The pizza is a unique take on what I grew up on, Chicago thin-crust pizza, which you really don’t see out here at all,” he said. “It’s not Neapolitan-style. It’s tavern-style, cracker-almost crust. I was fortunate to have some friends in Chicago who own pizza places and I was able to get some little tricks of the trade as far as creating a nice crispy, thin crust. I’m really super happy with it. That’s probably one of my favorite things on the menu right now.”

Before being named executive chef of the soon-to-come Truss in 2019, Anderson was executive chef at San Francisco’s two-Michelin-starred Coi. He has also done stints at the French Laundry, Noma and, perhaps most notably, Nashville’s the Catbird Seat, where his interactive tasting menu got him James Beard Foundation Award nominations and Food & Wine “Best New Chef” nods, and shot his restaurant to the top of Bon Appetit’s, GQ’s and Esquire’s best-of lists.

Anderson tapped Craig Wilmer (Coi, Petit Crenn) to join him in the Truss kitchen as chef de cuisine, and he has a network of farmers, ranchers and artisans around the Bay Area who are collaborating with him at the restaurants. That includes Deborah Keane of California Caviar and Brent Wolfe of Wolfe Ranch.

“Wolfe Ranch quail, I think, is the greatest quail in the country,” Anderson said. “The care he takes to raise his own birds, they’re just so fat and juicy, unlike any quail I’ve ever had.”

Designed by EDG, the Living Room has floor-to-ceiling sliding glass doors and offers indoor-outdoor dining overlooking the Palisades Mountains and hundreds of acres of vineyards. The real show may be the other direction though, facing the fully visible kitchen, where Anderson and his team are just getting warmed up.