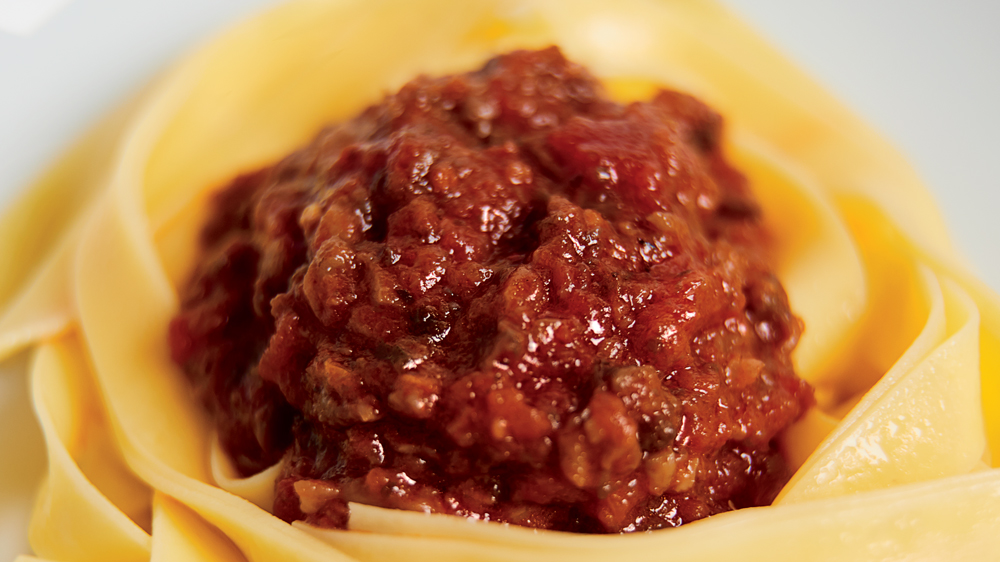 Le Bernardin has helped changed the game and expand the possibilities for seafood at restaurants in America. Since 1994, those efforts have been led by chef Eric Ripert, who has led the kitchen to three Michelin stars and to become one of the most influential restaurants of the last three decades. Starting in 2016, Ripert has taken his impeccable technique and applied it to a vegetarian tasting menu at Le Bernardin as well, which now serves dishes like artichoke with vegetable risotto and a carrot sorbet with beet caramel and walnut nougatine.

And this week he took his affinity for cooking vegetables one step further, releasing his new cookbook—aptly called Vegetable Simple—that’s entirely devoted to produce preparation. To commemorate its release, Ripert has shared a recipe from the book for a vegetarian twist on Bolognese that uses mushrooms instead of meat. In conjunction with the release of Vegetable Simple, Ripert is offering a vegetable tasting menu featuring recipes from the book that will be available at Aldo Sohm Wine Bar in New York City.

Some evenings, there is nothing more satisfying than a warm bowl of Bolognese. The flavor and texture of this recipe rival that of “real Bolognese” and is much lighter, therefore allows second (and third!) helpings.

In a medium pot, heat the olive oil over medium heat. Add the shallot and garlic, reduce the heat to low and sweat the vegetables for 2 to 3 minutes.

Add the mushrooms and stir well. Increase the heat to medium-high and season the mixture with salt and white pepper. Cook for 3 to 4 minutes, until the mushroom liquid releases and begins to reduce.

Add the reduced wine and cook until the mixture is nearly dry. Add the tomatoes, reduce the heat to a simmer and cook for 30 minutes, stirring occasionally. Add the Sriracha. Adjust the seasoning with salt and white pepper to taste, cover and keep warm while you cook the tagliatelle.

Bring a large pot of water to a boil. Add a large pinch of salt, add the tagliatelle and cook to al dente, according to the package directions.

Drain the pasta and divide it among four warmed bowls. Ladle the sauce over each portion of pasta and serve. If desired, garnish with parmesan.