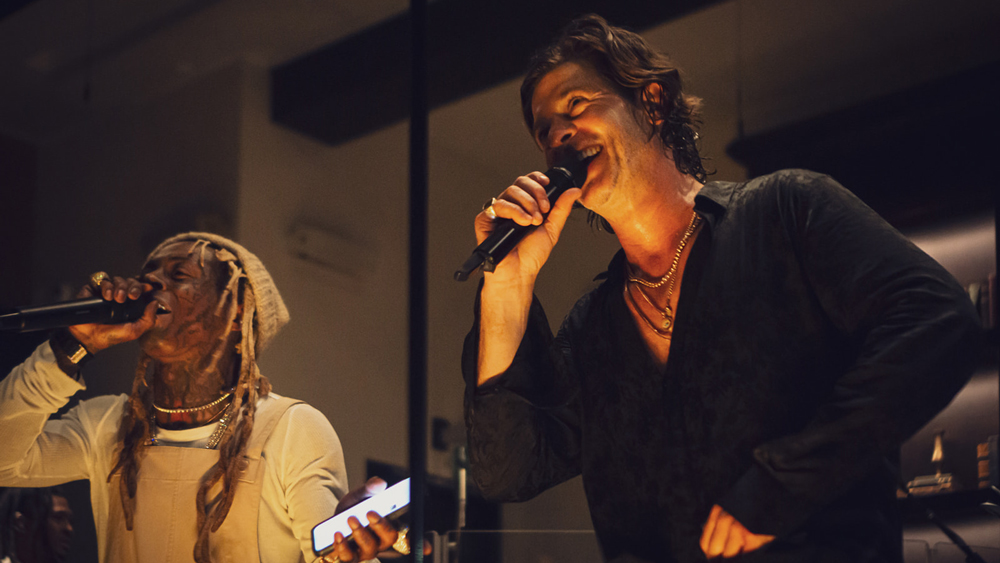 On many nights, the hottest ticket in Los Angeles is a restaurant reservation.

Verse, the Toluca Lake destination that 10-time Grammy-winning mixing engineer Manny Marroquin operates next to his storied Larrabee Studios, has some of LA’s most creative and delicious food. The restaurant is also an intimate music venue where Robin Thicke just finished a five-week Thursday-night residency that included a surprise duet with Lil Wayne on June 9.

The setting inspired Thicke to do a different kind of show each Thursday.

“It felt like a brand new experience every week,” he says. “Usually when you hit the road, you do a similar show every night, but we did a completely different set list, tried new things that we had never done or rehearsed much before, so it was very organic and spontaneous. And the audience could feel it as well as the band.”

The bar at Verse  Michael Pieters

On Thicke’s heels, Ozomatli—the pioneering band that has exuberantly blended Latin music, rock, funk, hip-hop, jazz and social consciousness since 1985—will perform at the restaurant every Wednesday in July.

“It was obvious that we had to do something together,” Ozomatli co-founder and lead vocalist Asdru Sierra says of Marroquin, whom he’s known since they were students at LA’s Alexander Hamilton High School and music academy. “We’ve accomplished things that are a dream come true, especially given that we were not people of privilege and really had to work to get where we are. He was there when my band was starting to pick up. Verse is just something that’s very LA. And it’s small, which means that everyone can hear everything.”

Not every show is planned though. On a recent evening, Charlie Puth worked on his latest single at Larrabee Studios, went to dinner at Verse and decided to grab the mic and perform a few hits. Kendrick Lamar recorded his new album at Larrabee and visited Verse several times for dinner. Lamar didn’t perform, but he enjoyed eating caviar and uni for the first time.

There’s live music at Verse every night, and sound from the restaurant can be pumped into Larrabee via fiber-optic cable for recordings. Verse also has technology that can recreate sound architecture of the Walt Disney Concert Hall, Lincoln Center, the Vienna State Opera and other prominent venues. A noise-cancellation system blocks out the sound of silverware. Microphones pick up the energy of the crowd, and a different set of microphones is used for recording music. Visitors are surrounded by speakers, subwoofers and camouflaged sound panels in a space that Marroquin caps at around 135 guests.

“There’s no stage, no riser,” he says. “Musicians perform as if it were my living room. And the vibe of them not even being lit in a professional way, I think, brings that sort of authenticity.”

But Marroquin says that Verse is a restaurant above all else. Mexican-Angeleno chef Oscar Torres makes lamb pasta that’s a riff on birria and serves seared albacore tostadas that deserve to be in the same conversation as Enrique Olvera and Wes Avila dishes.

Torres remembers visiting his grandparents in Jalisco and helping out at his grandfather’s farmers-market stand. Another of his most formative food experiences was eating his dad’s chipotle-tomato broth with pork cracklings, panela cheese and avocado.

When he was 13, he asked his father to show him how to cook this.

“I was impressed by the fact that it took so much work,” Torres says. “Even then, I knew this dish had texture, sweetness, acidity and salinity.”

Torres also has a 12-seat chef’s table in his kitchen, where he’s been trying out eight-course tasting menus with wine pairings for friends of the restaurant. In the future, guests will be able to book regularly scheduled chef’s table dinners, which come with a tour of Larrabee, a studio where artists like Taylor Swift, Madonna, U2 and Adele have recorded. When I ask Marroquin to share some personal highlights, he mentions working on John Mayer’s Continuum, Lamar’s new Mr. Morale & the Big Steppers and multiple early albums by both Alicia Keys and Kanye West. And he’s just finished albums by Phoenix, The 1975 and Paramore. To say that this studio and this restaurant have range is an understatement.

Marroquin feels lucky that Verse, which opened in December 2019, even exists now. Shoemaker abruptly left the restaurant not long after it debuted. And then Covid-19 hit.

Owning a studio that is open 24/7, Marroquin deeply understands that both the music and restaurant industries are powered by creativity as well as just grinding until you turn something that isn’t fully formed into a banger. So he offered Torres the chance to run his own show at Verse. Marroquin asked Torres if he would do weekly tastings to develop menu items while the restaurant was closed during the pandemic. Marroquin warned that some of his feedback might be harsh. Torres was up for the challenge.

“I realized he was mixing my dishes,” Torres says. “He was doing what he was doing next door. He would tell me things he thought were wrong. He wouldn’t demand. He would suggest.”

Now the 30-year-old Torres is running one of LA’s most exciting kitchens while Marroquin’s 21-year-old son, Matias, manages the dining room and puts together the wine list. Torres is blown away by the wine knowledge that Matias, who’s traveled extensively with his father, has at such a young age.

Being a longtime “studio rat” has made the 50-year-old Marroquin respect the energy and potential that comes with youth.

“We joke about it all the time at Verse,” he says. “I say, man, a bunch of kids are running the place. It’s about hiring personalities. You’ll take a gamble on somebody who’s hungry and ready to take on the world.”

Marroquin and Torres want Verse to be a collaborative endeavor. Early last Thursday morning, Sierra joined Torres at the La Princesita tortilleria in Boyle Heights to do research for Ozomatli’s residency. The Ozomatli cofounder had asked Torres about putting sopes on the menu for the July shows, so they visited La Princesita to check out some Masienda heirloom blue corn.

“I have literally all this tortilla juice all over my pants,” Sierra says happily.

Sierra gave Torres his mother’s sopa de fideo recipe, and Torres is reinterpreting the noodle soup as a risotto. That’s often how things go down at Verse and Larrabee. You take an idea and mix and master it until everything feels complete and correct.

After the new Lamar album was finished, Marroquin invited Torres to listen to it at Larrabee.

“By the end of the album, I think everybody was almost in tears,” Torres says. “And that’s when Manny was like, ‘That’s what I wanted to create at Verse.’ When you listen to something in the studio, it’s from the artist’s perspective. It’s exactly the way they want you to hear it. And then he was like, ‘Oscar, that’s exactly what I want you to do.’ The restaurant is technically a studio with 150 flies on the wall getting the same expression of, like, holy shit. It doesn’t matter if the room has Kendrick Lamar in it or if it’s a Robin Thicke night. We focus so much on making sure that every person who comes in here has the same exact experience as everyone else.”