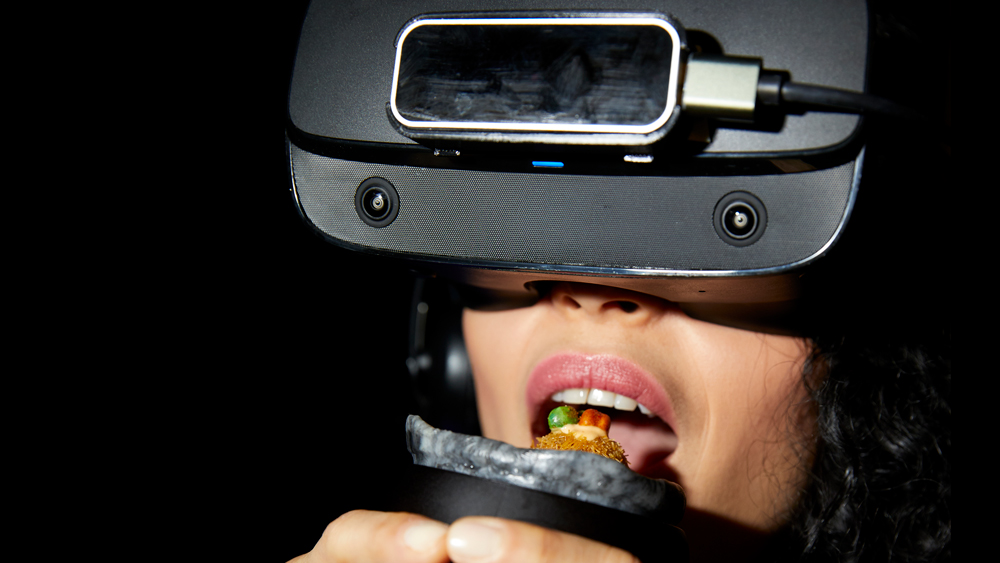 As I walked toward the hallowed James Beard House in Manhattan’s West Village, I wondered what the “Dean of American Cookery” himself would think of what I was about to undertake: eating a meal while immersed in virtual reality world. Beard is credited with being the forefather of American cooking and is known as one of the world’s first “foodies,” but he also lays claim to hosting the first television food program, back in 1946 on the then-emerging medium. If Beard was ready to embrace the newest medium of the time, it seems fair to assume he’d be supportive of testing out the latest frontier in technology and dining.

Inspired by the 1932 Italian book, The Futurist Cookbook, artist Mattia Casalegno came up with the idea of virtual reality dining in 2018, launching Aerobanquets RMX with experiences in China and South Korea. For the U.S. debut, he teamed up with New York restaurateur Roni Mazumdar and chef Chintan Pandya, both of critically acclaimed Rahi and Adda Indian Canteen, and with the James Beard Foundation. The $125 seven-course meal, which launched in November 2019 and recently got extended through January 2020, deviate from the typical dinner hosted at the James Beard House quite a bit. They are just one hour long, feature a maximum of four diners per session, and have time slots available from 12 to 9 pm.

Still, I had almost no idea what to expect. And upon entering the townhouse last Friday at 1 pm, I was even more perplexed. Instead of the usual hustle and bustle of the house, it was empty save for two other guests in the front room and our host, Antonio, who proceeded to talk to us about safety rather than food. I’ve never had to be instructed on how to eat before, but this adventure would require some direction. Aside from basics like what the headgear would feel like and instructions not to flail our arms too wildly (while also encouraging us to explore the manipulatable, 360-degree world), he presented us with a stubby little stand with small plate perched atop. All our food would be served on this custom-made, 3-D printed plastic vessel, featuring a small lip to help guide food into our mouths when we wouldn’t be able to see it.

After a quick tour of the townhouse we had an initial course of small delicious bites—the only ones we would actually get to see, including a paneer tart with chili and chicken tikka masala with mint puree. When the previous group came down the stairs abuzz from their experience, I quickly covered my ears. Little did I know that nothing could prepare me for this experience—not even reading this article, which admittedly contains several spoilers.

Finally, the three of us are led up four flights of stairs to a tiny room in a part of the house I’d never seen before. The all-black space has a simple round table with four office-type rolling chairs and a few spots marked with Xs made from masking tape. Massive black helmets with goggles hang from wires and there are several open laptops. It looked more like a movie set than a dining room. My personal handler fits me with my headgear and instructs me to look at my hands. A strange, digitized version of them appear before me, moving as I wave them in front of my face. Suddenly, I am plunged into a virtual version of the main dining room at the James Beard House. Trying to orient myself, I stare straight ahead, until I remember this is a 360-degree world that I can crane my neck to see. This first scene turns out to be the only one rooted in reality.

How food placed in your actual hand appears in your digital one.  Photo: courtesy Aerobanquets

The landscape shifts to an endless checkered floor with a table and a dish of digitized food that resembles a red ball. I realize I’m supposed to reach for it. I feel the vessel in my hands and lift it to my lips. The bite is small, sweet, and juicy. An apple maybe? Before I can fully wrap my brain around the taste, the scene changes to a black space with utensils, plates, and glasses floating around me. I can grab them, move them, and make them glow. As I reach out again, something is put into my hand and a voice (Top Chef’s Gail Simmons, to be precise) says “It’s so dark in here, what is that?” Of course, I have to eat it. Here, there’s no refusing something because I don’t want it—after all, I don’t even know what it is. It feels too large in my mouth and I feel self-conscious about what I must look like. It tastes like fish, with an adornment of some kind of fruit leather. Without knowing what it is, I try to focus on whether it pleases my palate. The answer is yes.

As the meal progresses, the scenery around me does, too. All of the scenes are surreal, with things like giant fruit bouncing around a bright background, and a graphic deer floating in space (really). Several times when I reach for something I slam into the table or swat a person. Sometimes, I close my eyes for a few seconds to focus on the food bites and what they might be. Every once in a while, Simmons’ voice returns, saying oddly esoteric things like “I think it tastes like a whistle through a wind lock blowing through a door lock on a cold afternoon.” Er, okay Gail.

One memorable scene features a swirl of beans, chickpeas, capers, 25 red cherries, 12 fried potato chips, and a sip of Barolo (or so I’m told by Simmons). The food appears and I eat it. I actually dislike this bite, which tastes kind of like spicy falafel to me. It’s dry, and I find myself wishing for that Barolo. Suddenly, a bottle pouring white liquid from a moon-like object appears. I’m parched.

The final scene is a world populated by massive Greek-style statues reclining on a liquid-like surface. I feel slightly dizzy and hot, and my eyes hurt. A vessel appears and I take the bite, which is depicted like a pink and red orb with small stalks growing out of it, almost like a waving anemone. It’s cold—strawberry sorbet? And pieces of seaweed, maybe? It’s refreshing, an excellent palate cleanser with a strange texture. The water rises around me, making my feel like I’m about to drown. It keeps rising until everything is black. And…scene.

Our headsets are removed and the three of us are speechless and jabbering at the same time. A final bite of chocolate ice cream and water is served before we’re led into another room where Mazumdar and Pandya await. (The two are not at every meal but there’s always a debrief following the experience.) We discuss how our brains process taste when we’re surrounded by a different world than what we expect. How preconceived notions and choice affect what we eat and how we taste.

The two admit to using narration and images that don’t match up with the actual food served, simply to reframe things, and well, mess with our heads.

“As soon as you see a dish, subconsciously your mind will start talking to you about that dish,” says Pandya. They reveal that, spoiler alert—one bite containing Impossible Meat is served during a scene where instruments made out of meat float around, in an effort to make us think we are eating meat. This didn’t quite work on me (I thought it tasted vaguely of seafood), but one of my dining companions says he thought he ate pork.

I had some minor quibbles. I was still hungry after the seven small bites (According to Pandya, each one is half-inch by half-inch), which after throwing down $125 and using up my lunch hour is not ideal. I longed for a drink component (which the team says they are working on). And the room is definitely too small.

In the end, it was an incredible dining experience that I’ve definitely never had before—pretty hard to come by these days. Ideal for adventurous diners willing to set aside their preconceptions and put their life—or at least a meal—entirely in someone else’s hands

Before we leave, Mazumdar waxes poetic about how this technology could evolve. “Our goal is to build a platform so that one day chefs and artists can collaborate on dynamic environments. The same way how today we see people building restaurants, tomorrow can we build virtual worlds where you can have incredible meals?”

As I leave, I’m handed a printed menu. It’s strange to see a list of foods I supposedly just ate and my accuracy rate is pretty abysmal…but I won’t spoil it.