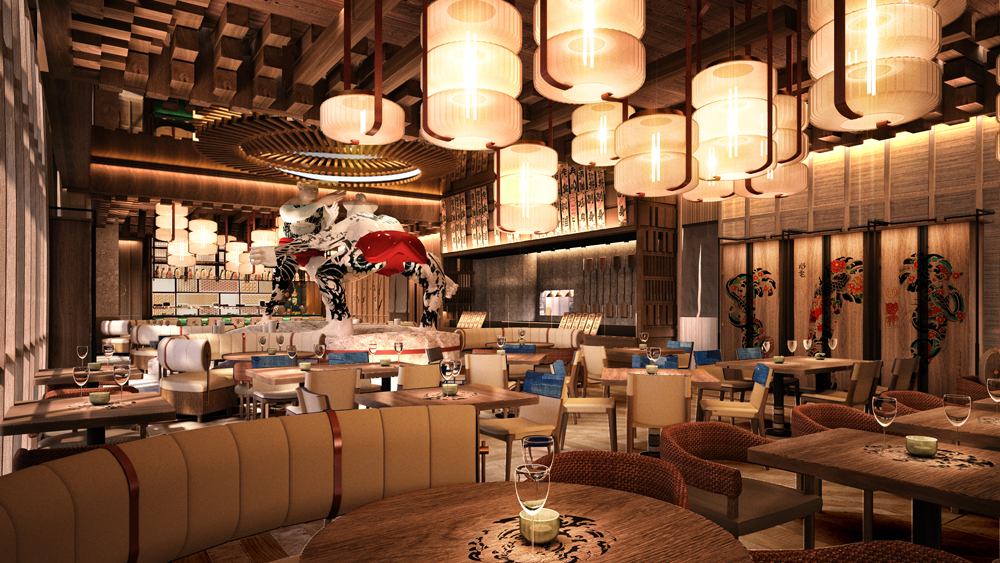 Internationally acclaimed chef Tetsuya Wakuda  and 50 Eggs Hospitality Group are opening this glamorous new spot at The Venetian, where a little fine dining counter is tucked away inside a larger Strip-facing restaurant.

“It’s a Zuma or Nobu on steroids, where you’re getting this insane Japanese cuisine but you’re in an environment where our music, food, service and art are colliding along the way,” 50 Eggs founder and CEO John Kunkel says of the 250-plus-seat restaurant that debuts June 25.

This is the first restaurant in America from a chef who has two Michelin stars for Waku Ghin at Marina Bay Sands in Singapore and was previously ranked among the World’s 50 Best for more than a decade for Tetsuya’s in Sydney, Australia. And he’s ready to create something that will match the undeniable energy of the Vegas Strip.

“The restaurant is inspired by the Shinjuku area of Tokyo, which is very similar to Las Vegas with its buzzing clubs and entertainment,” Wakuda says.

But if you want a more serene and rarefied meal, you can attempt to book one of only eight seats for a customized $500 omakase dinner at Wakuda.

“Part of the intrigue of omakase is putting yourself in the hands of the chef,” Wakuda says. “Selections will be tailored based on any ingredient preferences and allergies, but the goal of visiting our omakase room is to enter the world of Wakuda and envelop yourself in our creativity.”

You’ll have to reserve a seat in the omakase area (which is accessed through what Kunkel calls “a secret pathway” and has a high-end Japanese whisky bar for cocktails) to experience this ever-changing 10-to-15-course meal. Or there’s an adjacent 12-seat private dining room for VIPs. But guests in the rest of the restaurant will be able to enjoy Wakuda’s interpretation of classic Japanese dishes: robatayaki grilled over binchotan, sushi, sashimi, tempura, cold soba, rice bowls and much more.

“Even with a la carte ordering in our main dining room, the selections highlight the very best dishes that I’ve created over the years,” says Wakuda, who mentions favorites like Kagoshima Wagyu (with smoked eggplant and seasonal vegetables) and miso Patagonian toothfish.

Ingredients like Canadian lobster show the chef’s desire to source from around the globe.  TNM Media

Rather than resolutely focusing on Japanese ingredients, Wakuda is committed to sourcing best-in-class items from around the world: Canadian lobster, Australian beef and New Zealand Ora King salmon alongside Japanese seafood and Japanese beef.

Wakuda is a new restaurant brand with global ambitions. The first outpost opened at Marina Bay Sands in Singapore this past April and has seen a scrum for reservations—David Beckham dined there last week.

“We’ve definitely been capping reservations,” Kunkel says of the Singapore Wakuda. “Tetsuya is in constant pursuit of perfection. We literally served 20 people a night, and then 40 people and then 50 people, until we felt it was perfect enough to move to the next level. We wanted to make sure that every guest was really having an over-the-top experience.”

But in Vegas, where things are bigger and even more over-the-top, Wakuda is ready to open a restaurant for the masses. Part of the allure here will involve sakes that you can’t drink anywhere else.

“Our menu features nearly 100 sakes, including sakes produced in small batches by artisans offered only at Wakuda,” says Wakuda, who in 2006 became the first ambassador of the Japanese sake industry. “Two of my favorite sakes are from our private labels, Junmai Ginjo Isojiman and Toyama Japan. I travel to Japan regularly and personally taste them before they get bottled.”

Kunkel, meanwhile, has restaurants that also include Yardbird and Chica at The Venetian, but he knows that Wakuda is taking his restaurant group and Vegas casino dining to another level. After all, there’s plenty of European-influenced fine dining on the Strip, but a Michelin two-star Japanese chef serving omakase in a tiny hidden room while also offering a la carte crowd-pleasers in a party-hearty setting is something else altogether.

“It is by far the best thing we’ve ever done as a company,” says Kunkel, who started thinking about creating a Japanese spot after he and some chef friends (including Vegas and Singapore casino veteran David Myers) visited the ramshackle bars and restaurants in Shinjuku’s famed Golden Gai alleys. “Over the last five years, I have gone out of my way to visit every Japanese restaurant in the name of research and development. What makes Tetsuya Tetsuya is just the constant pursuit of excellence and, you know, time and temperature and cut and presentation. So we’re attempting to take Michelin-star-quality dining, both in terms of service and food, and put it into an upbeat, energetic, almost entertainment-based dining experience in Vegas.”