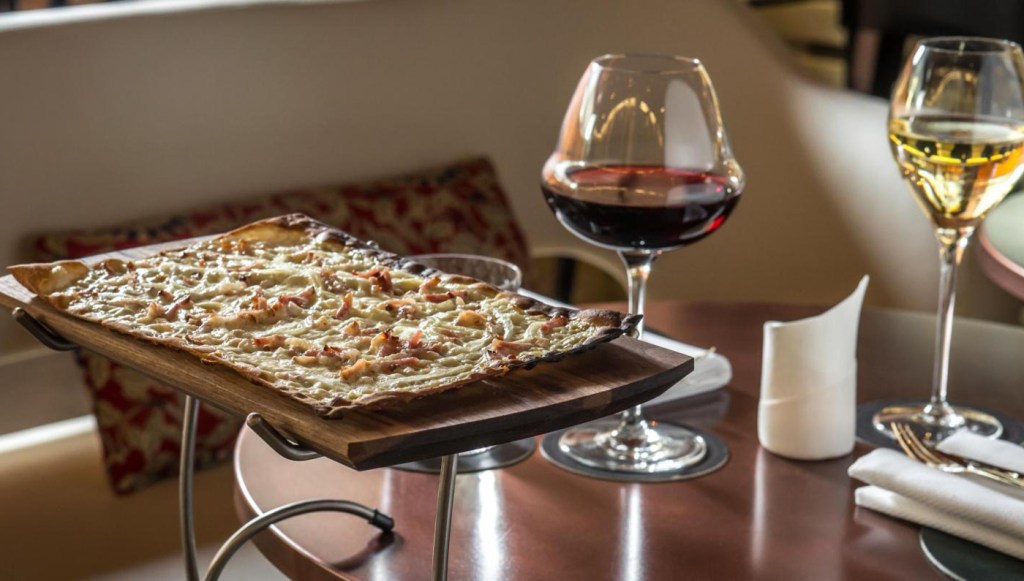 It opened this past summer, but we’ll argue that winter—now—is the right time to visit chef Gabriel Kreuther’s eponymous new restaurant. Because, really, no one does cold-weather comfort food better than the Alsatians. And no chef in NYC does Alsatian cuisine better than Kreuther, a native of the French region that borders Germany and Switzerland.

You know Kreuther, even if his name itself rings only the faintest of bells. He reigned over the kitchen at The Modern for nearly a decade, earning it a Michelin star; he left in 2014 to focus on this, his own project, bringing with him much of what made The Modern successful (including many of the front-of-house and kitchen staff) and already earning a Michelin star for 2016 as well.

Kreuther’s new culinary palace is a stunning space: elegant and light, all cream-colored leather and rough-hewn wood. But the main dining room with its long prix fixe and tasting menus—lovely as it may be—is best saved for power lunches and super-hot dates. For your new regular hang, head to the bar/lounge area. As at The Modern, it’s a more casual but still sophisticated space with its own, also more casual, menu, available á la carte. And, vitally, it’s only there that you’ll find some of the rustic-luxe Alsatian dishes that are each, individually, reason enough to visit.

Take, for instance, the Alsatian tartes flambées, one of Kreuther’s signature dishes at The Modern. Here, there are four iterations, from classic (topped with smoked bacon, onion, crème fraîche, and fromage blanc) to a slightly ostentatious version with caviar and sea urchin. Then there’s the sausages, again in four varieties, each with its own accompaniment: think duck sausage with shaved brussels sprouts, or country sausage with house-made sauerkraut. Many other items on the bar menu seem tailor-made for warming a hungry diner on cold winter days—it’s that time of year for the Alsatian country beer soup with ham hocks or the lentil stew with red wine-braised tripe, trust us.

Opening an eponymous restaurant is a fairly ballsy move. Few NYC chefs try it, and those that do have name recognizability along the lines of Daniel Boulud or Jean-Georges Vongerichten or Joel Robuchon (scratch that; it didn’t turn out so well for that last one). But Kreuther is proving that he’s got the chops in the kitchen, and the instincts to know exactly what NYC diners crave, to merit recognition right up there along with the culinary big boys.