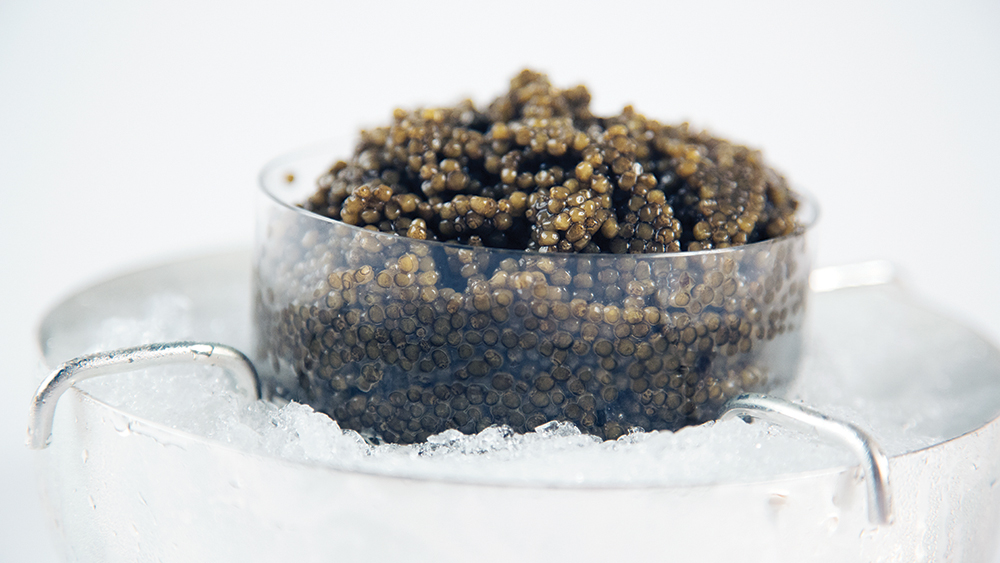 Caviar is widely considered to be the Rolls-Royce of ingredients; a hallmark of haute cuisine that has forever upheld its reputation of being unequivocally luxurious. But how have fish innards become such a highly coveted delicacy? We spoke to experts in the caviar field along with some of the country’s top chefs—including Eric Ripert and Jean-Georges Vongerichten—to find out what exactly is caviar, where to source the very best and, most importantly, how to serve those beautiful black pearls. Here, your in-depth guide to some very coveted fish eggs.

Caviar is unfertilized eggs—also known as roe—that are harvested exclusively from the sturgeon family of fish and then salt-cured. There are other popular types of fish roe—like the bright orange salmon roe (ikura) which sits atop sushi—but only sturgeon roe is considered caviar. Caviar is always spherical in shape, while color can range from jet black to deep khaki green, depending on the specific variety. It has a delicate flavor and is not overly fishy or salty but rather smooth and buttery. Sometimes it can have a nutty taste similar to that of hazelnut. Authentic caviar has a famous “Caspian pop”—which occurs when the roe bursts on the palate.

What Are the Different Types of Caviar?

There are many different species of sturgeon which produce their own unique type of caviar. According to Ilya Panchernikov the managing director of Caviar Russe—a high-end Madison Avenue restaurant which specializes in caviar—the three species of sturgeon which made caviar famous were beluga, osetra and sevruga. “Beluga was always considered the best because of its rarity and size, followed by osetra and sevruga,” Panchernikov says. “In addition, there are other caviar producing sturgeons, including the Pacific sturgeon and Siberian sturgeon.” If that’s not enough, there’s also a myriad of hybrids being produced—beluga X Siberian, Chinese hybrid (dauricus X schrenki) and osetra X beluga, to name but a few.

Where Is Caviar Produced?

Until just a few decades ago, caviar was harvested from the wild sturgeon swimming in the Caspian and Black seas. The fisherman would capture the fish, cut out the “roe sacks” that held the eggs, and throw the fish back in to die. This overfishing critically endangered the wild sturgeons, so the United States Fish and Wildlife Service and the Convention on International Trade in Endangered Species put a series of bans and trade embargoes in place and made it illegal to sell or harvest wild caviar in the United States. Today, most of the world’s caviar is being farmed across across the globe, from China to the Middle East to Madagascar.

According to Rod Mitchell, president of Browne Trading Company—a premier supplier of fine caviar in the Northeast—it matters less about the location and more about how it’s actually produced. “The most reliable places to buy caviar are not areas but reputable farms,” Mitchell says. “We at Browne Trading co-brand with producers and farms so customers actually know where their caviar if farmed and produced.” Panchernikov echoes this approach and Caviar Russe is focused on forging relationships with artisanal sturgeon farms—mainly in Europe—to produce caviar “which resembles what was once available in the wild.”

Do Farm and Wild Caviar Taste Different from One Another?

The main difference is taste. A fish’s diet and environment contribute greatly to the flavor of the caviar it produces—how briny, rich or buttery it is. Wild fish have a diet that is eclectic and varied, hence their roe has a more complex flavor. Conversely, farmed sturgeon have a controlled diet, which results in consistent quality and uniform taste. Panchernikov says wild and farmed caviar have a similar taste, “but wild caviar would most likely have a greater intensity overall.”

Does Price Matter with Caviar?

Thanks to the influx of farmed sturgeon, the price of caviar has dropped substantially. Generally, you can expect to fork out around $100—give or take—for an ounce of premium caviar. But you get what you pay for: on the higher end of the spectrum, you’ll find caviar that reflects the time and effort put into the fish as opposed to cheap caviar which is a result of sub-standard production. “Cheap caviar is usually inconsistent, old, soft, salty or just plain awful,” Mitchell says.

Where Should You Buy Caviar?

Stick to longstanding reputable brands that are primarily focused on caviar. Pay particular attention to the provenance, production, handling and storage of the caviar. And be wary of words like “imported” and “Russian”—no caviar legally comes from Russia now—as they can be put on the label to deceive consumers. Here are some of our favorite purveyors.

For three decades, some of America’s finest chefs have looked to purveyor Rod Mitchell and his Browne Trading Co. to source caviar fit for Michelin-starred kitchens. Browne offers a wide assortment of caviar from around the globe, importing osetra produced by Russian sturgeon and working with aquaculturists on Idaho’s Snake River to source some of America’s best caviar.

Thomas Keller teamed up with renowned caviar expert Shaoching Bishop—formerly of Tsar Nicoulai and Sterling Caviar—to create this company devoted to working with purveyors around the world to source outstanding products. Regiis Ova (Latin for “royal egg”), supplies Keller’s three-star kitchens, as well as other Michelin-starred restaurants, like San Diego’s only starred establishment, Addison. The company offers a range of varieties from the buttery and nutty Russian Ossetra to its classic, hailing from the US.

Starting as a shop in Paris in 1920, Petrossian has built itself to be a name synonymous with caviar. The Petrossian brothers—Mouchegh and Melkoum—fled the Armenian genocide, bringing briny, blackfish roe from the Caspian Sea with them to their boutique that still operates under family ownership today.

Russ & Daughters dates back to 1914, when it first opened as a little shop on Orchard Street on the Lower East Side. It moved to Houston Street in 1920 and has remained there for a century, selling some of the finest cured and smoked fish in the city. It also specializes in caviar, offering top-notch osetra, Siberian baerii, American transmontanus and more. Even better, Russ & Daughters offers nationwide shipping for its caviar, cured fish, bagels, babka and more.

Sourcing directly from sustainable, small-batch sturgeon farms in Germany, Caviar Russe not only sells online, you can go visit its restaurants in New York and Miami to sample its wares. At the Michelin-starred Gotham location, that includes the option of a $975 grand tasting menu where caviar is the star. You can buy individual tins of caviar ranging from as little as 28 grams to an entire kilo (for Almas, that tin will set you back nearly $21,000), but Russe’s Indulgent Collections will send you caviar along with foie gras, creme fraiche, blinis and smoked salmon.

Where Should You Store Caviar and for How Long?

You should keep caviar in the coldest part of your fridge—usually at the bottom—at between 34 and 38 degrees Fahrenheit. An unopened tin of caviar can be stored in the fridge for 10 days to two weeks. However, because caviar gets saltier as it ages, it’s best to eat it fresh.

What Are the Tell-Tale Signs of Good and Bad Caviar?

More than 20 years ago, Mitchell and acclaimed chef Daniel Boulud came up with a grading system—known as “The Three Ts”—to assess caviar. It stands for Taste, there should be no bitter, salty or unpleasant flavors; Texture, the eggs should be firm enough that you can separate them with your tongue and they pop when pushed to the roof of your mouth; and Tone, they should have a clean color with a nice glisten. Panchernikov adds that good caviar should have low salinity, a rich buttery flavor and leave no after taste. “A good rule of thumb is to treat caviar like oysters, if it tastes wrong it’s probably either old or poor quality,” he adds.

How Should You Serve and Eat Caviar?

Lauded French chef and long-time caviar enthusiast Eric Ripert—who even had his own exclusive caviar line at one point—says “good quality caviar doesn’t need too much to be enhanced.” Purists will simply dollop caviar on the back of the hand with a bone or mother-of-pearl spoon—metal utensils are to be avoided as they may oxidize caviar—or pile the roe high atop a warm blini along with a smattering of crème fraîche. The Le Bernardin chef says he likes to serve it simply with Pullman white bread.

That’s not to say the delicacy is limited to this type of preparation. Ripert himself has served roe-packed croque monsieurs and caviar-embellished wagyu. And his Michelin-starred contemporary Jean-Georges Vongerichten approaches caviar in a similar fashion. “We serve caviar in many different ways, from simple melba toast or warm blinis to my egg caviar and caviar creations,” the chef says. Vongerichten’s inventive creations see the ingredient paired with lemon gelee, egg toast, warm potatoes, tapioca, yogurt and herbs.

Of course, experimenting with roe is not a new phenomenon. Ripert recalls working in the kitchen with Joël Robuchon in 1983 and incorporating caviar in a bunch of eclectic recipes—but since the delicacy is becoming somewhat democratized, it’s being featured on a lot more menus. “Because the price of caviar has dropped dramatically, more and more chefs are using it in their cooking,” Ripert says. The influx of sustainable and ethical farms has also contributed to the rise in popularity. “It is still an expensive item but now it’s a lot more accessible as there are farms everywhere,” Vongerichten adds.

But, really, there’s no wrong way to eat it.