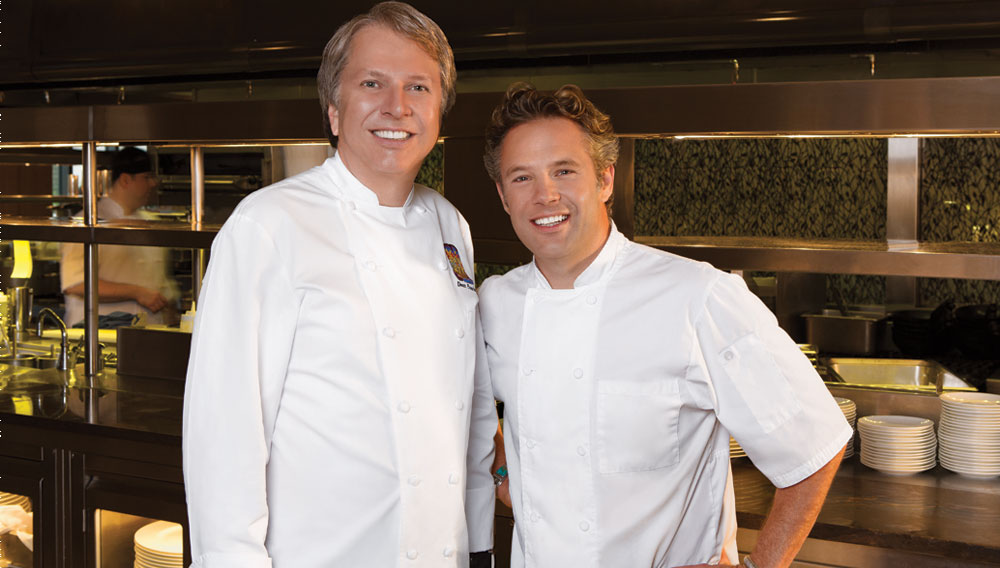 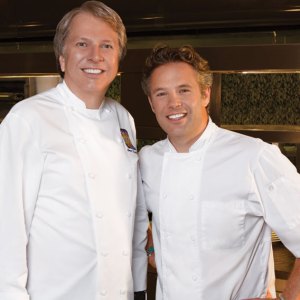 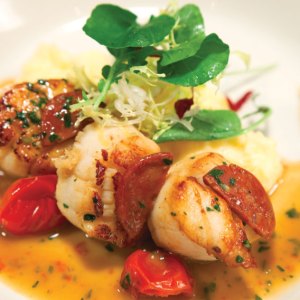 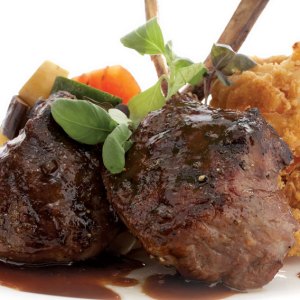 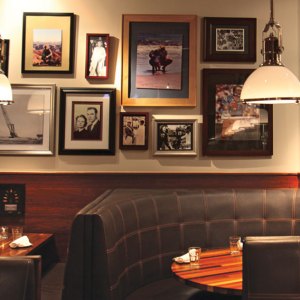 In 1979, just a year out of the Culinary Institute of America in New York, Dean Fearing drove into Dallas with everything he owned loaded into a Toyota Celica fastback. He immediately felt at home. “It was a brand-new city then,” he recalls. “It didn’t make any difference if you were blue collar or a millionaire—people would talk with you. You could have a conversation.” The dialogue between the chef and Dallas diners has not stopped since.

Fearing pioneered Southwestern cuisine at Agnew’s before moving to the more formal Mansion on Turtle Creek in 1985. Over the next two decades, he developed an elegant, idiosyncratic cuisine—a pot-au-feu of cowboy cookery, barbecue, Gulf Coast seafood, Hill Country German dishes, and even a few Asian accents. Determined to treat his diners to a breezier atmosphere, he opened Fearing’s Restaurant at the Ritz-Carlton, Dallas, in 2007. At Fearing’s, the classic rock playing in the background sometimes segues into the kind of alt-country that Fearing himself plays with his all-chef band, the Barbwires. Prices signal that this is still the Ritz, and the maple-and-black-pepper buffalo tenderloin stands firmly in the big-night-out tradition. But Fearing characteristically dresses down this main course with jalapeño grits, a butternut-squash taquito, and chili aioli.

Fearing hired Nick Badovinus in 1996, straight out of what was then Oregon’s Western Culinary Institute, to work at the Mansion. The two clicked immediately. They share the same swagger, the same offbeat sense of humor, and the same spirit of adventure that induced them both to show up in Dallas with all their earthly belongings in the back of a vehicle—a pickup truck in Badovinus’s case. Fearing, who groomed Badovinus as his protégé, selected his former kitchen hand as his nominee for this year’s Culinary Masters Competition.

After training under Fearing, Badovinus teamed up with the restaurateur Phil Romano to open Nick and Sam’s, and then with Consilient Restaurants to open Hibiscus, Dallas’s premier steak house, and the Porch, a gastropub where down-home cuisine is paired with uptown cocktails. In 2008, Badovinus ventured out on his own to open the first Neighborhood Services restaurant, which remains a casual spot where neighbors—Fearing included—stop in for bold, straightforward dishes with a Texas twang. He now runs three branches of this community favorite, along with the burger joint Off-Site Kitchen.

Fearing and Badovinus recently sat down in their chef’s whites to talk about their overlapping pasts and plans for the future. Fueled by double espressos, they were a boisterous pair of cowboys singing the praises of simple meat cookery and the sophistication of Dallas diners. Both professed their love of the reinvented neighborhood joint, and Badovinus acknowledged Fearing as an inspiration for his next project: an upscale restaurant called Town Hearth, due to open in 2015. This milestone, Fearing hinted, will represent the culmination of a journey the chefs have made together.

NICK BADOVINUS: I got turned on to Southwestern flavors early. My stepmom is Mexican, and she’s the best cook in any room. She let me mess around in the kitchen, and there was always music in the air—kind of festive and fun—which is what cooking has always meant to me. So when I was going through culinary school, I was always aware of the Mansion on Turtle Creek—that was the kind of food I wanted to learn at the highest level.

DEAN FEARING: On tax day, when my boys and I were at Neighborhood Services, you came over to the table and said, “Eighteen years ago to the day, I started at the Mansion on Turtle Creek.”

NB: When I showed up, I was as green as a pea shoot. To start my career not only working with you but working at a place of that caliber taught me things that I use to this day. You told me, “Taste your food.” That sounds pretty elemental and straightforward, although it’s one of the least-practiced essential skills. You helped equip me to go out in the world and earn a living.

DF: What you’re doing in Dallas today is very important. The style of restaurant that you have is what we all want. It’s this new style of cuisine, and it’s very simple. We both love wood-burning fires. My cuisine—and especially yours—comes off a wood-burning fire. Who doesn’t love that taste? I’m a little higher-scale restaurant, and you’ve found your niche doing great food at a very comfortable price. My teenage boys and I eat at Neighborhood Services three or four times a month. For me, it’s always the swordfish on creamy grits with voodoo sauce. The boys get the flat iron steak with french fries, and I make sure we down a good amount of garlic spinach.

NB: I think what’s happening in food here is refining a rusticity that’s uniquely Texan. Your tortilla soup is a perfect example of elevating a simple dish. I have it on the menu at Neighborhood Services as Tortilla Soup Tribute. Guests often say it is the best they have ever had. The food is designed to spur interaction at the table, not to be consumed in hushed tones. We both have spots that are about that type of spirit. We are facilitators of people having a great time.

DF: When people talk about modern Texas cuisine, I think they mean that we are using more local ingredients. It’s been a long time coming, since we only have one great growing season, and it can be short if it gets real hot. It’s an extension of what I’ve always been doing. I like to look at a menu and go, “Wow.”

NB: At the Mansion, even 18 years ago, you had an assortment of foods with a Texas source. The buzzwords over the last half decade have been smaller, more local, more boutique as a way to communicate quality. I don’t think that proximity always means better. As chefs, we should be committed to the best product for the best price for the customer.

DF: When you have wood burning, and you have great product, and you have a little Texas flair, it makes it very interesting for our customers. There has to be some kind of flair in today’s restaurant. That’s what we both aspire to. I don’t care if our style influences the rest of the country. There’s this spirit here that you can do what you want to do. A lot of restaurants from big-name chefs came into this city. They were all going to teach us how it was going to be. They didn’t survive, because Dallas loves a personality. Dallas loves to know who is in charge of where they’re eating. People trust in you. People trust in me. And it’s not something that happens overnight. They have to feel the honesty of a restaurant and of the people who are running it. I’ve always known that, with your personality, you were going to be able to do whatever you want.

NB: I’m a meat-and-potato guy, and I don’t think that means dumbed-down or simplistic. I like it simple, and I like it honest. It gets back to what modern Texas cuisine is, what you and I share a love of—that straightforward dead flesh, salt and pepper, and a fire. I am a big believer in the traditions of the American spirit. And I believe a steak dinner still means something. It’s still a big part of the American dining experience.

Dean Fearing strides through his restaurant in his hand-tooled Lucchese cowboy boots as if he has just stepped off the stage at Billy Bob’s Texas in the Fort Worth Stockyards, and he keeps a vintage Fender Stratocaster at the restaurant as a reminder of the road not taken. “I almost went into the music business,” he says, recalling the choice he made in his teens. “But my dad suggested that playing the circuit might get a little old. It really was a fork in the road, and I decided that I wanted to cook. I can always play.”

In fact, he does play with the Barbwires, an all-chef band he fronts with Robert Del Grande of RDG and Bar Annie in Houston. “Being a musician and being really good—that’s something I can only aspire to,” says Fearing, who is well aware of the difficulties musicians often face. “You think our life is hard? If something happens, like the car breaks down, you need dental work, you have to go to the hospital, it sure is nice to have something there for you.”

That is why Fearing chose MusiCares as his beneficiary for the Robb Report Culinary Masters Competition. The National Academy of Recording Arts and Sciences—the organization behind the Grammy Awards and the Grammy Foundation—established MusiCares more than 20 years ago, after the legendary bandleader Woody Herman died broke and nearly homeless. Debbie Carroll, MusiCares’s executive director, says that this incident was a wake-up call for others in the industry.

MusiCares provides direct and confidential assistance to musicians “when they hit a bump in the road,” Carroll says. “That can mean a variety of things. It can mean medical care, dental care, substance-abuse treatment, basic living needs, car payments, rent, utilities, equipment replacement during natural disasters or when equipment is stolen.”

The foundation also coordinates the MusiCares Medical Network. Scott Powell, a board member and orthopedic surgeon who was one of the founding members of the 1950s-style band Sha Na Na, encourages medical specialists to offer health and dental clinics and provide low-cost services.

MusiCares is funded mainly by benefit concerts and charity events, through which it provides about $3.5 million in aid each year to about 3,500 people in the music business. Fearing cooks for the annual grill-and-barn-dance benefit at the Nashville home of his longtime friend, the singer-songwriter Rodney Crowell. “Not only did I find a world-class chef, but also a vintage guitar collector,” Crowell says. “His enthusiasm for playing music rivals his passion for food. Dean’s lust for life is contagious.”

Fearing relishes the chance to pitch in. “Rodney asked me to help out with the cooking, and he lets me jump on stage with him,” he says. “We all love music—we love when someone plays something. But musicians live from week to week, depending on how many gigs they get. It’s not an easy life.”