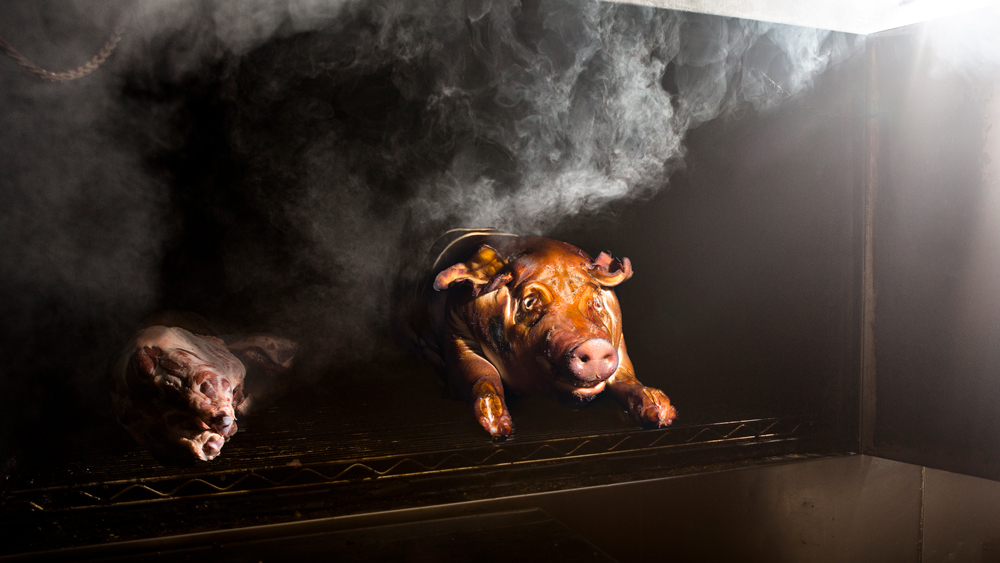 When you order the Whole Animal Experience at Chicago’s Frontier, there’s the inevitable discussion about eyeball shots. “Two people at a whole-animal party have to eat the eyeballs from the pig, lamb, or whatever animal it is,” says the restaurant’s chef and partner, Brian Jupiter. “We drop the eyeball in a shot glass of booze, cheers, and that’s that.”

Unappetizing as it sounds, it’s all part of a new food movement that’s serving up animals cooked in “large format,” as Frontier’s menu calls it, and dropped right on your table. It’s a meal no doubt reserved for the most steadfast of carnivores—and brave ones at that, with restaurants like Jupiter’s serving whole goat, antelope, and even alligator alongside the usual pig and wild boar.

The rising popularity of whole-animal dinners can be attributed to a few theories, one of them being the ever-growing farm-to-table obsession. “When the farm-to-table movement really started to move into meat, you started seeing more whole animals,” Jupiter says. But it’s also more primal than that, the chef argues. “A lot of people in so many cultures cook a whole pig, whether it’s in a pit, on a spit, in a smoker, whatever. That’s part of the reason people go pig-crazy.”

There’s definitely something celebratory about cooking a whole animal, one reason being it might take your entire extended family to polish off a $575 lamb cooked over apple and cherry woods. “The whole animal laid out on a table family-style just brings people together,” says Servio Garcia, owner of Bisq in Cambridge, Mass. His menu offers feasts of whole suckling pig, lamb, goat, duck, chicken, and various types of fish.

Other restaurants are taking the whole-animal concept to the extreme. Washington, D.C.’s Tail Up Goat buys only whole animals, butchering them in-house and using as many parts as possible (rendered fats can be used in place of frying oil, for instance). In January, the restaurant held the first dinner in its new Dairy Cow series, serving a variety of cuts from a retired dairy cow for a meal that fed more than 100 guests.

Such large portions surely require high demand, but Jupiter says that hasn’t been much of a problem at Frontier. “We’ve done as many as 15 whole-animal dinners on a single Saturday night,” he boasts. And as for those eyeball shots? Turns out they’ve become the icing on the meat cake. “It’s now something groups are fighting over. We even had a bride and groom toast their guests with eyeball shots.”