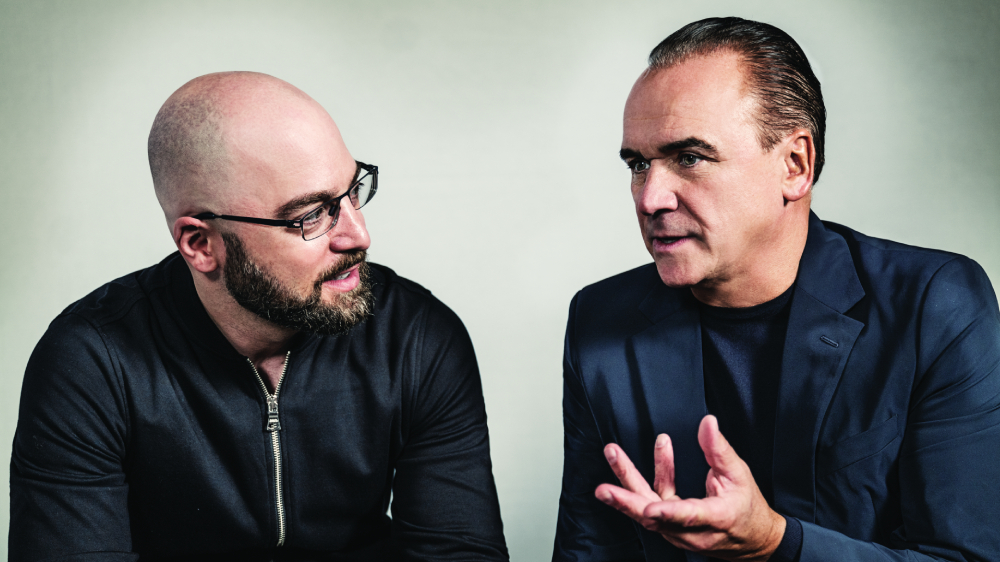 French-American chef Jean-Georges Vongerichten is a culinary titan, with two Michelin stars for Jean-Georges in New York City and another for Tangará Jean-Georges in São Paulo, Brazil. He has top-tier restaurants the world over, from Sand Bar in St. Barts to Mercato in Guangzhou. He is also a fervent supporter of City Harvest, which collects excess food from New York restaurants and delivers it to food pantries, soup kitchens and other community groups. ¶ Greg Vernick grew up near Philadelphia and is slowly building an empire in the city: first establishing a fine-dining spot called Vernick Food & Drink eight years ago before adding the seafood-focused Vernick Fish and the casual Vernick Coffee Bar. He earned the James Beard Award as Best Chef: Mid-Atlantic in 2017. ¶ They met when Vernick joined Vongerichten’s team to open Perry St. in New York in 2005.

“When I eat Greg’s food, I see a lot of myself in it. I see the balance of acidity and seasoning. Everything comes packaged today, and a lot of young chefs don’t know the process—a chicken comes in a bag, whereas when I started 45 years ago, I had to pluck the feathers. But he’s respectful of the product. He knows how long it takes to grow a radish.

“In his latest restaurant, you can see him in the open kitchen. He’s looking at people eating, every single customer. How are they eating? Are they smiling? I look at the way a customer eats their food, too. You want to make sure it’s 100 percent satisfaction; that’s not possible, but you have to try to make it so.

“I saw in him right away that he had that passion. Usually a young cook starting in the kitchen is more quiet, but he had a lot of questions. He stayed [late] to learn more, to see more. I could see this wasn’t a person who just saw cooking as a job. The sky is the limit. In creativity, he is one step ahead.

“And we both like negronis. We’ve had some crazy nights at Perry St., celebrating and getting drunk, though today he’s a little more serious—he has a family to go home to every night. But I’m sure we will do it again some time.

“I see myself in him. I’m not his literal father but a spiritual one.”