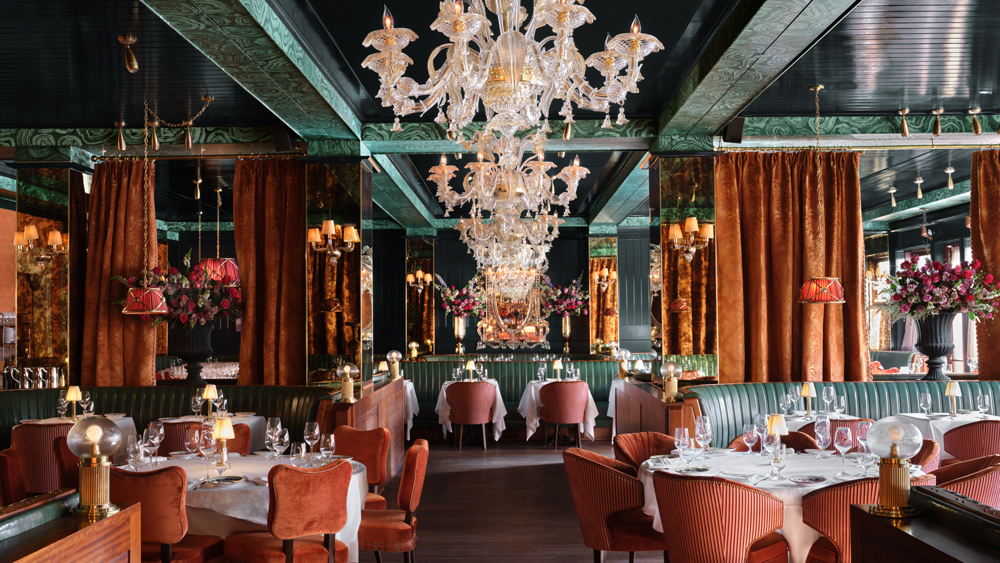 Even if you’ve eaten six burgers before indulging in a tasting menu at the South Beach Wine & Food Festival (which is coming back in May), even if you’ve danced ’til dawn at an Ultra Music Festival afterparty, even if you’ve drank Cristal straight out of the magnum on a Bitcoin billionaire’s yacht during Art Basel, you might not be prepared for the amount of energy that’s in Miami right now.

“Something like a Big Bang happened in Miami,” says restaurateur Stephen Starr, who’s working to open an outpost of New York’s Pastis with Keith McNally in Miami’s Wynwood area next year. “Miami’s always been great with its weather. South Beach two decades ago was a major international deal. But prior to right now, Miami’s just been coasting along. It’s been the same old Miami, nothing incredibly different, maybe even a little tired at times. But Covid hits, and all of a sudden this becomes the Garden of Eden.”

Miami restaurants, which have been allowed to operate at 100 percent capacity since October, are packed. And guests all over the city are having a wild time. Go to Dave Grutman and Pharrell Williams’ Swan in the red-hot Design District even on a weeknight and you might see multiple tables eating lobster pasta and ordering bottle service with the requisite sparklers at 9:30 p.m. Then another sparkler shows up with the “Birthday Party” dessert that includes a miso chocolate chip cookie, ice cream and assorted toppings.

“The energy is different,” says Grutman, who’s opening South Beach’s Goodtime Hotel (which will have Mediterranean-inspired restaurant Strawberry Moon) with Williams on April 15. “I think people are more appreciative seeing each other than they ever have been.”

Grutman is a local operator who started as a bartender at the Aventura Mall before becoming the king of Miami nightlife at LIV, but Miami’s energy has also attracted many out-of-town restaurant heavyweights. At Marcus Samuelsson’s lively Red Rooster Overtown, brunch means beans with wagyu oxtail, pitchers of rum punch and a “beach bird seafood tower” that has fried chicken, oysters, shrimp and caviar-topped deviled eggs. That comes with a sparkler too.

In the Design District, where Major Food Group is close to opening its ZZ’s Sushi Bar private members club with an omakase counter from chefs Masa Ito and Kevin Kim (both formerly of Sushi Zo in New York), much of the excitement is about restaurant groups from New York. At the Design District’s Le Jardinier, downstairs from sister restaurant L’Atelier de Joël Robuchon, a $46 three-course lunch with delightful options like a cold asparagus velouté and a caramelized onion, mushroom and smoked gouda quiche is a relaxing way to spend an hour after shopping at Gucci or A Bathing Ape.

Cote, another New York transplant in the Design District, is where well-dressed guests start Korean barbecue feasts by ordering filet mignon tartare topped with caviar, which is playfully known as “steak and eggs.” Top-tier beef, including wagyu that’s dry-aged on-site, is cooked on tabletop grills. Banchan like a scallion salad and sides like kimchi jjigae bring the funk.

Over in South Beach, Carbone has been an unprecedented success for Major Food Group. The restaurant is booked out for months. Major Food Group is tight-lipped about its clientele, but Miami is buzzing about how A-listers like Derek Jeter, David Beckham and Jerry Seinfeld have eaten at Carbone alongside hedge-fund bosses and Silicon Valley moguls. A warm Instagram welcome from Lebron James only added to the hotness of Carbone’s January debut. You could easily start a meme about how other restaurants have been serving billionaires who can’t get into Carbone on any given night.

“It’s the most excitement over an opening that we’ve ever had in our careers,” says Major Food Group co-owner Jeff Zalaznick. “The demand for what we do is even more than we ever dreamed it could be. Even after having crazy amazing insane openings in Vegas and New York over the years, I’ve never seen anything like this.”

Zalaznick, who’s also working on many other Miami restaurants that include an upscale trattoria in the Design District and a steakhouse in Brickell, elaborates on how Miami is different: “The weather and the taxes are not even the best things about this place,” he says. “The best thing about this place is the positivity and the optimism and the fact that everybody’s happy and wants you to do well. That’s just a thing I haven’t seen before. Everyone from your customers to your landlord to the government is there every step of the way. They want you to open and want you adding to culture and want you to be part of the fabric of this city.”

“I think it’s great,” Grutman says. “It raises the bar for everyone. We’ve always operated on a pretty aspirational bar anyway.”

“Clearly, more restaurants is more competition, but I think more quality restaurants definitely lifts up the overall experience in Miami,” says Balli, whose hospitality group is partnered with Samuelsson on Red Rooster Overtown. “I think some of these will succeed and some won’t. A lot of these places are about chasing tourists. If you can tap into the local community, that’s what gets you through the summertime, which is the hardest part of operating restaurants in Miami.”

Grove Bay’s hot spots include South Beach’s Stubborn Seed, where Top Chef winner Jeremy Ford cures salmon for 30 hours and serves grits that are grown in the same soil as carrots. This feels very much like a terrific modern American restaurant that would do well in many neighborhoods around the country. But this is in Miami’s upscale South of Fifth area (where Carbone, Milos, Joe’s Stone Crab and Prime 112 also thrive), so it makes sense for Ford to top both pasta and fried potatoes with truffles and caviar for VIP customers and tasting menus. Grove Bay’s Stiltsville Fish Bar, in South Beach’s Sunset Harbour area, is where chefs Jeff McInnis and Janine Booth serve excellent Buffalo fish collars and a weathered tackle box full of chilled seafood like stone crab. You can pick the whole fish you want out of a vintage bathtub at Stiltsville. South Beach, of course, is about making meals over-the-top and fun.

Miami’s restaurant scene still has a lot of room to grow. Grove Bay’s expansion plans include three restaurants at Coconut Grove’s Regatta Harbour. Grutman is looking in Coconut Grove. Starr, who already has Makoto and Le Zoo at the Bal Harbour Shops, is planning something on the Miami River. Both Starr and Grutman see potential in Allapattah.

Developer Gil Dezer is working on the Uptown Harbour development with 2,000 apartments and 500,000 square feet of retail space that could include 18 to 20 restaurants in North Miami Beach. Dezer is also courting top-tier hospitality groups for a beach club at a forthcoming hotel.

Established local chefs are eager to see what’s next. At the new Abba in South Beach’s South of Fifth Area, I eat stellar salatim and shakshuka on the beautiful patio while chef Sam Gorenstein (previously at My Ceviche) reveals that 60 percent of his customers are from New York and that he loves seeing so many out-of-towners flock to Miami. (It doesn’t hurt that Major Food Group front-of-the-house star Louie Carbone is also having lunch at Abba when I’m there.)

Gorenstein, who got a James Beard Rising Star Award nomination in 2010 for his work at Miami’s BLT Steak, says that Abba is his dream restaurant. He’s a Sephardic Jew who grew up in Colombia. He’s long wanted to serve Israeli food.

Gorenstein likes how Abba has attracted regulars and become a daytime and sunset destination where guests leisurely sip wine. I tell him that Abba feels like a good spot to pregame before a blowout dinner nearby.

“For now,” Gorenstein says with a smile. He’s got big plans to start dinner at Abba soon.

At the moment, Miami has an insatiable appetite for both daytime and nighttime dining. And some local operators are ready to flip the script on the newcomers from New York.