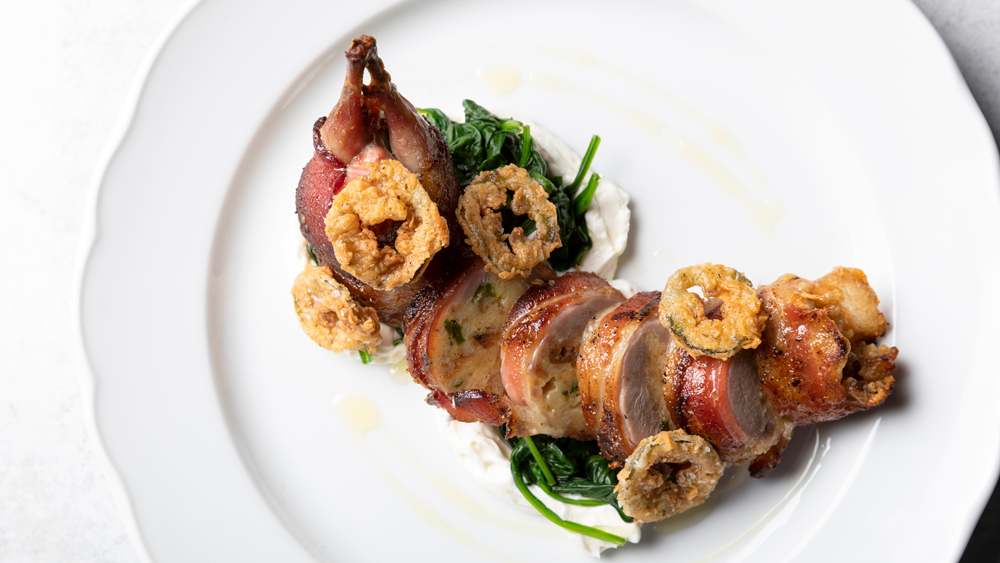 Chef Nick Fine has a dream for his new Houston spot Wild Oats: One day, he hopes, a customer orders a shot for everyone in the restaurant. Not a shot of whiskey that is—a shot of chili, which is an actual option on the menu.

“Wouldn’t it be funny if somebody was like, ‘a round for the whole bar!’” he said, laughing. “We have that so you can come in and get a taste of chili instead of having to commit to a whole bowl.”

Portion sizes aren’t the only thing Fine is having fun with at Wild Oats, a new project from Chris Shepherd’s Underbelly Hospitality that opened Thursday, Feb. 10, at the Houston Farmers Market. Fine is remixing essential Texas dishes and ingredients to tell stories about the Lone Star State that haven’t been heard before. Wild Oats, he hopes, will do for Texan cuisine what Underbelly did for Houston’s.

“Texas food is easy to stereotype, and this restaurant is about rejecting those stereotypes and showing the underbelly of our state—the ingredients, the people and cultures who make it one of the most diverse in the nation,” Fine said. “My hope with this restaurant is to highlight Texas cuisine from Gulf Coast shrimp to the quail found in the Panhandle and everything in between.”

Fine, who also serves as Underbelly Hospitality’s culinary director, is uniquely qualified to tell these stories. He grew up in Texas, then traveled all over the country to hone his cooking skills, including doing stints at Dean Fearing’s Mansion on Turtle Creek in Dallas, Oak and Acorn in Boulder, Col. and Veritas in New York. He returned to Houston in 2015.

“I moved like 35 times in my life, but Texas has always called me back,” he said. “So a lot of these dishes off this opening menu are things that hit home with me and come out of my experiences just being a Texan. And I want to tell the story of some of the Texas food scene that no one really knows.”

For example, Wild Oats’ quail poppers are inspired by a dish Fine and his dad used to make together while dove hunting. The bird is stuffed with jalapeños, wrapped in bacon and served with whipped cream cheese. And the pork steak is named after Tootsie Tomanetz, the famed pitmaster at Snow’s BBQ in Lexington, Texas, whose pork steak, Fine says, rivals her brisket. Wild Oats even has a kids’ menu with state fair staples like corn dogs and tater tots; the kids’ coloring sheets feature a portrait of Willie Nelson.

Other dishes are influenced by the cultures that make up Texas, such as Mexican, German, Czech and Vietnamese. Wild Oats’ redfish is served with tomatillo chow chow (pickled relish), the pork shank comes with spätzle, the crispy veggies are tossed in mole, the fajitas are made from short ribs and the Campechana (shrimp cocktail) is spiked with nam jim (chile, cilantro, fish sauce, palm sugar) sauce.

“This is the first time I’ve really focused on the German and Czech influences of our state,” Shepherd said. “Being able to look into Southern Texas and West Texas to work with Mexican ingredients—we didn’t have a strong Mexican focus at Underbelly, and it’s been really fun to work with ingredients like different styles of mole, dried chiles, tomatillos. You know I love a deep dive!”

The restaurant’s drinks list showcases Texas wine and cocktails like Margaritas and Palomas. The 180-seat space—spread out over a main dining room, private dining room and patio—is “Hill Country chic,” as Fine calls it. Patterned Linoleum flooring, Stetson hats and Texas white limestone are used throughout the design.

Even Austin-based barbecue master Aaron Franklin jumped in to help with Wild Oats. He and his team at Franklin Barbecue Pits, friends of Shepherd and Fine, volunteered to design the restaurant’s live-fire grill. It’s modular, so pieces can be moved around easily to allow for grilling over an open flame (like they do in West Texas), slow-roasting over coals (like they do in Central Texas) or smoking, Franklin’s specialty.

While they looked to Central Texas for their grill, Fine and his team are looking closer to home for ingredients and taking advantage of their location inside the Houston Farmers Market. They’re sourcing product from local ranchers and farmers, many of whom have stalls in the historic 18-acre market that was recently given a facelift.

“This market has always been one of the most iconic areas of the city,” Shepherd said. “The Houston Farmers Market is Texas to me—the vendors, the products, having a local butcher shop next door supplying us with a lot of our meat. It’s such a synergy and a dream come true. To open something here after it’s been redeveloped in a thoughtful and sustainable way—I had to jump on it.”