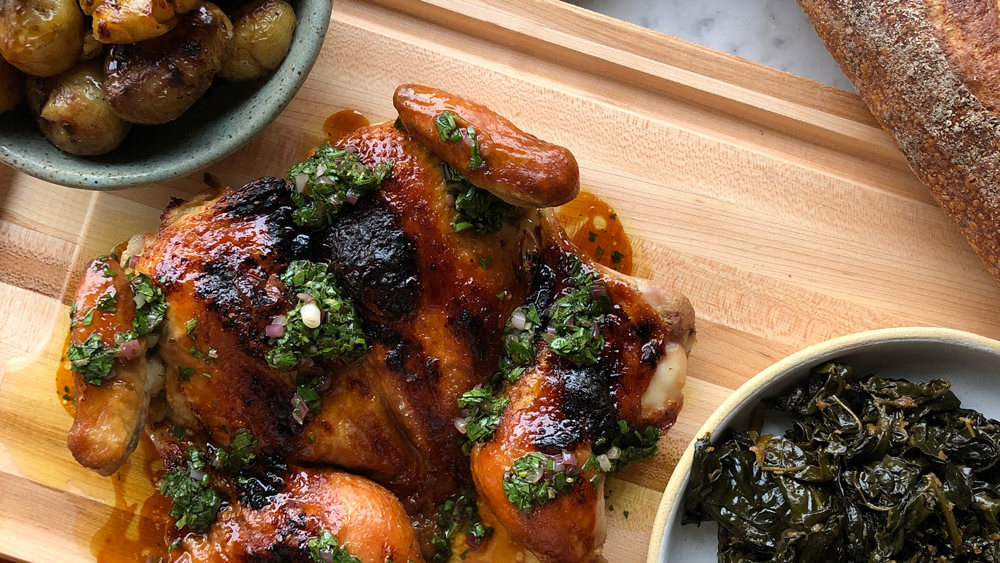 When chef Daniel Eddy lived in Paris, working at Daniel Rose’s Spring restaurant, he loved popping into bakeries in the evenings, tucking a warm baguette under his arm and carrying it home for dinner. So, when he conceptualized his all-day Park Slope, Brooklyn, restaurant, Winner, he wanted to recreate that comforting experience, and offer it to a very specific clientele.

“This is a community-oriented neighborhood, with a lot of professionals who work in the city,” he said. “So, there’s a constant commute; the train to Manhattan is just two blocks away. The idea became how can I capture this demographic on their way into the city so they can grab a coffee or a croissant, and then what can I offer them when they’re coming back home on their way to pick up their kids from school and put dinner on the table in 15 minutes.”

Now a father living in Park Slope himself, Eddy understood the demands on his neighbors. So, he opened the doors to his eatery in March, offering convenient espresso drinks and pastries like sourdough croissants and raisin bran scones in the morning; loaves of bread and sandwiches like ham and cheese in the afternoon; and spatchcocked chicken with sides like potatoes cooked in the drippings in the evening.

Many restaurants and bars in the neighborhood were on the verge of shutting down completely. However, Eddy—who had also ran the kitchen at Michelin-starred Rebelle in Manhattan and Walnut Street Café in Philadelphia—was not going to give up on his business or his neighbors. He shut his doors, but opened a window, one that fortuitously faced 11th Street and was large enough to pass to-go orders through.

“There was all of a sudden a captured audience that now had more than the 45-minute window when they were all commuting into the city,” he said. “They now have leisure time. They can stand in line for 15 minutes. I think it provided people a chance to give us an opportunity to see what we were about. And for a lot of them, coming here is an escape. It’s like, I get to get out of that house and get a little peace, and I come back with treats and I’m a hero.”

That captured audience allowed Eddy to quietly stay open, focusing on quality over quantity, and streamlining the menu with each passing day. Pastry chef Ali Spahr and baker Kevin Bruce stick to the mega hits, making only a few things daily, such as gluten-free morning buns, focaccia squares and vegan grapefruit and poppy loaves. This has been a relief to customers, Eddy said, because many who were stuck at home trying to perfect their own coffee drinks and pro-quality bread have now realized how hard it actually is, and they tell him they’re happy to spend money on the real thing.

Baguettes reminiscent of the ones Eddy ate when living in Paris.  Photo: courtesy Winner

Many of Eddy’s peers were not so lucky with the shutdown. His out-of-work chef friends began calling him, telling him they had nothing to do and asking how they could help his fledgling business.

“I was getting overwhelmed and part of me was like, nobody can come inside. I don’t trust any of you!” he said, laughing. “I love you all, but I can’t have you guys in here. But then I kind of figured that I could use their energy and they needed to do something, just to sort of keep their own sort of sanity.”

So, he invited one into his kitchen per week. Guest chefs like Amy Yi (Upland), Connie Chung (Eleven Madison Park), Melissa Weller (High Street on Hudson) and Eugenio Plaka (Barbuto) have taken turns running Winner’s prix fixe, “Friends & Family” meal, offering whatever set menu they feel like cooking—for $15 a person. It could be anything from Korean food to fish and chips to barbecue. Each chef is announced the week before on Winner’s Instagram.

“Each person who’s cooking is sharing something very personal, who they are and what they love to do,” Eddy said. “It also helps to reinforce that sense of community and a sense of responsibility toward one another in a time when we’ve been forced to separate, to keep to the confines of our own homes. Hopefully we can get out of this without completely losing our sense of that.”

In the fall he hopes to open a wine and cocktail bar in the carriage house next door. But he does not intend on letting people hang out indoors there either, regardless of what the city and health department tell him.

“I’m going to continue doing this for the foreseeable future,” he said. “If it means that I take a hit for not allowing people to come inside, even though all the other businesses around me are starting to, that’s OK. I’d rather err on the side of caution. I think there are a lot of people who are appreciative that we’ve created a system that reinforces that their safety and our safety is being held up as the utmost importance. It has to be.”