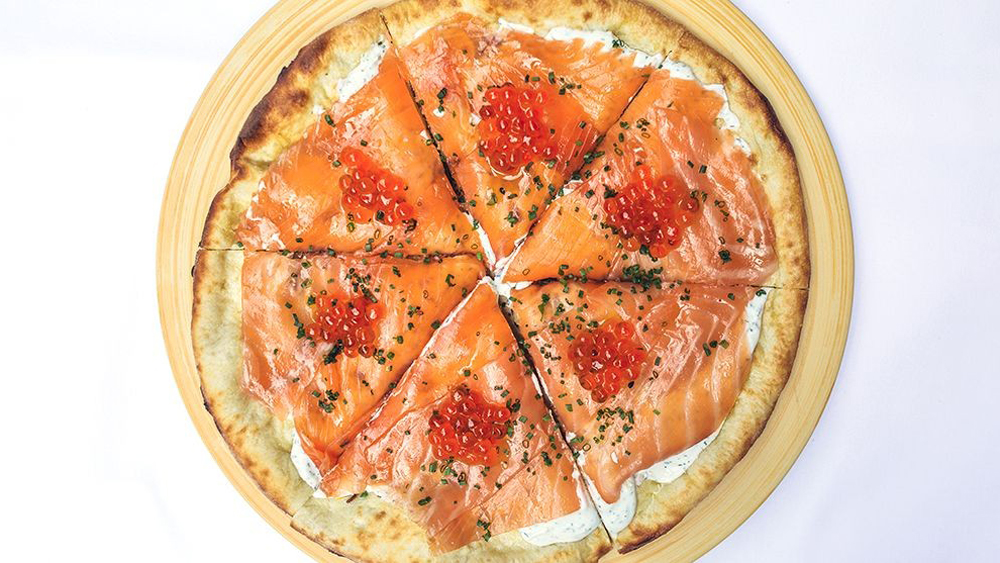 Back when Johnny Carson still ruled late night, he would buy 10 to 12 pizzas from Spago on Friday nights to go. After the Tonight Show host did it a handful of times, Wolfgang Puck got curious about the order and asked Carson if he was having another pizza party. To the chef’s horror, Carson was taking them home, freezing them and reheating the pies when he wanted one. Eventually, Puck would try it himself and he was surprised how much he liked it. That led to his line of pizzas that filled up frozen food aisles across America.

But while you could freeze a barbecue chicken pizza or Tuscan-style sausage and pepperoni pie and have it come out alright upon reheat, to get Puck’s famed smoked salmon pizza, you’d have to travel to Beverly Hills. You don’t have to anymore, as a two-pack is available on Goldbelly for nationwide shipping.

Puck’s notion of pizza is—as David Chang put it in the first season of Ugly Delicious—heretical. He’s always been willing to subvert genres and cross cultures for decades. Like when he riffed on a bagel with salmon by cooking a pizza crust without toppings, then slathering it with crème fraiche, covering it in smoked salmon, then adding dollops of trout roe or caviar and a sprinkle of chives. It really is a perfect dish, if not exactly “authentic,” a charge Puck willingly cops to.

“If we want to make pizza the way they did in Naples 300 years ago, it’s okay, I’m not saying it’s not good, but it’s just not our style,” Puck told Chang. “America is a melting pot of culture, so I don’t think there’s anything wrong with melting some of the cuisines together.”

The pizza has become a mainstay of Puck’s flagship Spago in Beverly Hills. He may take it off the menu, but there are always regulars who order it.

For $129, the kit arrives with two 10-inch pizza shells, 12 oz. of house-smoked salmon, dill crème and 2 oz. of trout roe. Unfortunately, it doesn’t come with Wolfgang regaling you with stories about hijinks at Swifty Lazar’s Spago Oscar party. For that, you’ll have to wait for the pandemic to pass so you can go to Beverly Hills and ask him yourself.