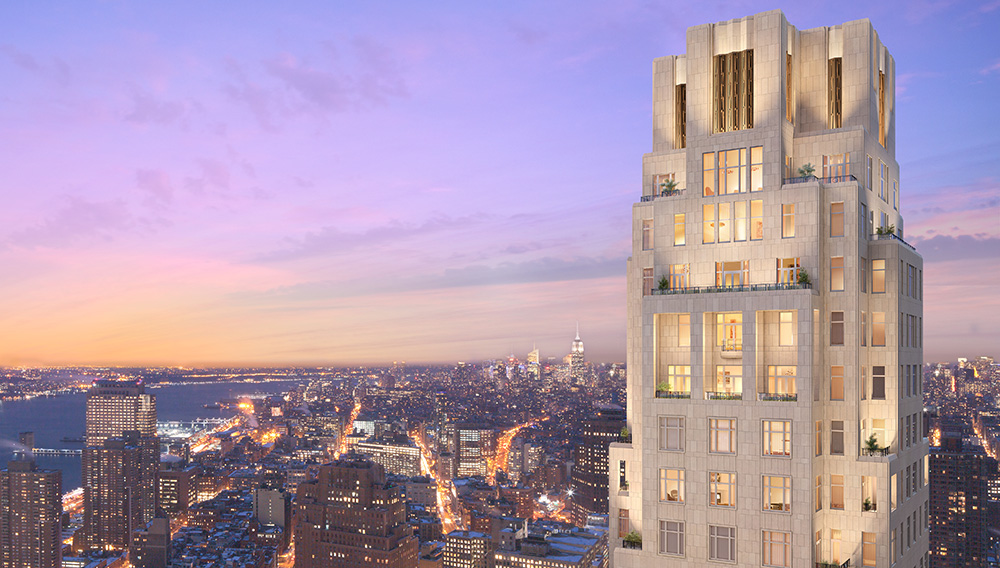 New York developer Larry Silverstein and Wolfgang Puck announce today that the chef and restaurateur will open his first New York City concept, CUT by Wolfgang Puck, at Four Seasons Hotel New York Downtown, alongside the new Private Residences at 30 Park Place in July 2016. The announcement marks the extension of the chef’s long-standing relationship with Four Seasons Hotels and Resorts and the seventh CUT restaurant worldwide.

“For my first restaurant in New York City, it was a matter of finding the right location and partner,” said internationally acclaimed chef Wolfgang Puck.  “We have a successful relationship with Four Seasons Hotels already and, combined with the partnership of Silverstein Properties, the timing was just right to bring one of my flagship brands, CUT, to the city.”

The opening of CUT by Wolfgang Puck marks the first ever restaurant in New York City by this celebrity chef and restaurateur, who has successfully opened a portfolio of fine dining concepts in various culinary capitals across the globe. Similarly, this is the first downtown Manhattan location for Four Seasons Hotels and Resorts, further emphasizing Tribeca as one of Manhattan’s most dynamic and vibrant neighborhoods. The opening of CUT by Wolfgang Puck parallels Silverstein Properties’ commitment to this neighborhood, bringing in a like-minded partner to complement the luxurious lifestyle of the first Four Seasons Hotel and Private Residences at 30 Park Place, and will be enjoyed by the condominium residents and neighborhood residents alike.

“30 Park Place is Downtown Manhattan’s first five-star living experience, and we are thrilled to have Wolfgang Puck as our chef partner,” said Larry Silverstein, Chairman of Silverstein Properties Inc.  “Wolfgang’s attention to detail, outstanding commitment to fine dining experiences, and culinary genius made him the obvious choice for Four Seasons, 30 Park Place and Downtown.”

“For the residents of 30 Park Place – Four Seasons Private Residences New York Downtown, CUT by Wolfgang Puck is a spectacular addition to a fully serviced lifestyle provided by the legendary Four Seasons,” says Kelly Kennedy Mack, President of Corcoran Sunshine Marketing Group. She continues, “There are very few New Yorkers who can say they have a restaurant by an award-winning chef just an elevator ride away.”

Designed by internationally renowned Robert A.M. Stern Architects, 30 Park Place is a limestone and precast concrete tower standing at an impressive 926 feet, with 82 stories and sweeping 360-degree views of New York City. In addition to the 185-room Four Seasons Hotel New York Downtown, 30 Park Place will feature 157 graciously appointed homes starting on the 40th floor, crowned by penthouse terraces. Residents will enjoy nearly 40,000 square feet of amenities, as well as a full suite of hotel services, all  managed by Four Seasons Hotels and Resorts. Condominium sales have enjoyed terrific success, and closings are slated to begin in Spring 2016.

“Four Seasons will extend its long-standing relationship with Wolfgang and the Wolfgang Puck Fine Dining Group with the opening of CUT. We are delighted to partner with him for his first Manhattan restaurant located at Four Seasons Hotel New York Downtown in the heart of Lower Manhattan’s burgeoning culinary scene. At Four Seasons we always look to create relevant and locally authentic dining experiences that fit with our locations. CUT will be a perfect complement to the dynamic energy of Lower Manhattan” says Peter Humig, General Manager, Four Seasons Hotel New York Downtown.

30 Park Place is situated in the lively New York neighborhood of Tribeca known for its sophisticated and cultured community. The tower is steps away from luxury retailers and local boutiques, and conveniences such as Whole Foods and the Tribeca Greenmarket, as well as upcoming retailers such as Eataly and Saks Fifth Avenue. Tribeca is well known internationally for the annual Tribeca Film Festival launched by acclaimed actor and New Yorker, Robert De Niro.

Currently, the firm has $10 billion of development underway: Four Seasons Resort at Walt Disney World, Four Seasons Downtown New York Hotel and Private Luxury Residences and 2 and 3 World Trade Center. In addition, SPI is focused on joint ventures for development and acquisitions in Europe, Asia and Israel. The company has been recognized as one of the “Best Places to Work in New York City” by Crain’s New York Business for the past eight years.  For further information on Silverstein Properties, visit www.silversteinproperties.com or www.wtc.com.

About Cut by Wolfgang Puck

The name Wolfgang Puck is synonymous with the best of restaurant hospitality and the ultimate in all aspects of the culinary arts. The famed chef and restaurateur has built a brand that encompasses three companies:  Wolfgang Puck Fine Dining Group, Wolfgang Puck Catering and Wolfgang Puck Worldwide, Inc. Wolfgang’s first fine dining venture began in 1982 with the opening of Spago in Los Angeles, and has since grown to over 26 award-winning locations that span over six countries including the U.S., United Kingdom and Singapore. Wolfgang Puck Worldwide, Inc. is a privately held corporation that includes a rapidly growing portfolio of company-owned and franchised locations of casual dining and fast-casual restaurants, as well as an extensive list of branded consumer products and other licensing and merchandising projects. Of the 50+ restaurants located across the globe, several are situated within non-traditional settings such as airports, universities, casinos and hospitals, as well as hotels, malls and as free-standing venues. Wolfgang Puck Catering, brings a new level of innovation and inspiration to special event and contract dining services for cultural, corporate and entertainment venues across the country, offering a restaurant-quality experience in a special event setting for both small and large scale events.

About Four Seasons Hotels and Resorts

Four Seasons Hotels and Resorts is dedicated to perfecting the travel experience through continual innovation and the highest standards of hospitality. From elegant surroundings of the finest quality, to caring, highly personalized 24-hour service, Four Seasons embodies a true home away from home for those who know and appreciate the best. The deeply instilled Four Seasons culture is personified in its employees – people who share a single focus and are inspired to offer great service. Founded in 1960, Four Seasons has followed a targeted course of expansion, opening hotels and residences in major city centers and desirable resort destinations around the world. With 95 properties in 41 countries, and more than 60 projects under development, Four Seasons continues to lead the hospitality industry with innovative enhancements, making business travel easier and leisure travel more rewarding. For more information on Four Seasons, visit http://press.fourseasons.com and follow on Twitter at @FourSeasonsPR.

Robert A.M. Stern Architects, LLP, is a 300-person firm of architects, interior designers, and supporting staff. Over its forty-five-year history, the firm has established an international reputation as a leading design firm with wide experience in residential, commercial, and institutional work. As the firm’s practice has diversified, its geographical scope has widened to include projects in Europe, Asia, South America, and throughout the United States. The firm maintains an attention to detail and commitment to design quality which has earned international recognition, numerous awards and citations for design excellence, including National Honor Awards of the American Institute of Architects, and a lengthening list of repeat clients.

With over 25 years of experience in marketing and collective sales in excess of $30 billion, Corcoran Sunshine Marketing Group is the recognized industry leader in the planning, design, marketing, and sale of luxury residential development. Representing properties throughout the United States and in select international locations, Corcoran Sunshine Marketing Group’s portfolio contains a curated collection of the world’s most desirable new addresses.