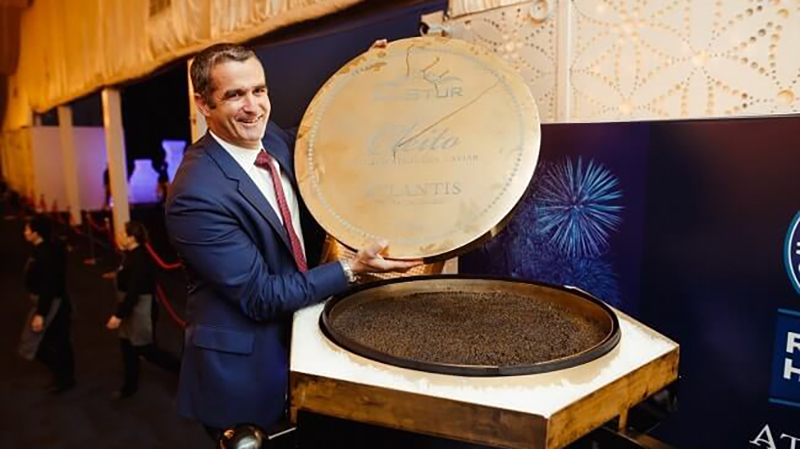 As 2016 prepared to turn to 2017, the hotel Burj Al Arab in Dubai held a New Year’s Eve gala with a very special guest. Carried by four white-gloved waiters, a gold-plated tin of 17 KG (37.5 pounds) of caviar entered the room. As it took the stage, people clamored to snap photos of the massive round of cured fish roe that the Guinness Book of World Records was about to crown as the largest tin of caviar ever. Until now, that is.

During this latest New Year’s Eve, a luxury hotel on Dubai’s manmade archipelago—The Palm Jumeriah—decided it wanted to not only break that record, but it wanted to smash it. So as guests prepared to ring in the new year at Atlantis, The Palm, they did so alongside a 50 KG tin of caviar from the company AmStur.

AmStur has made a name for itself in Dubai as a place that will sell caviar that is delivered to your door by a chauffeur in black tie. It calls itself a U.S. producer of caviar, owned by a family in California, but its offices are in the United Arab Emirates.

For the occasion of breaking the world record, Amstur and the hotel dubbed the tin “Cleito” in honor of the goddess who was the “Mother of Atlantis.” Cleito was the first certified organic caviar in the United Arab Emirates, made from white sturgeon roe. According to AmStur’s site, 1 KG of Empress caviar retails for AED 13,105, which is about $3,568 in the U.S. So the value of that caviar in the Cleito tin is roughly $178,385, which is enough to buy you one of our favorite SUVs from last year.

Though the pomp and circumstance surrounding the presentation of the caviar was high, its preparation wasn’t. The 5,000 guests at the party sampled the caviar with specially engraved mother of pearl spoons to commemorate the occasion.

Now the ball is back in the Burj Al Arab’s court. Will the luxury hotel look to reclaim its record from the upstart Atlantis for its next New Year’s celebration?