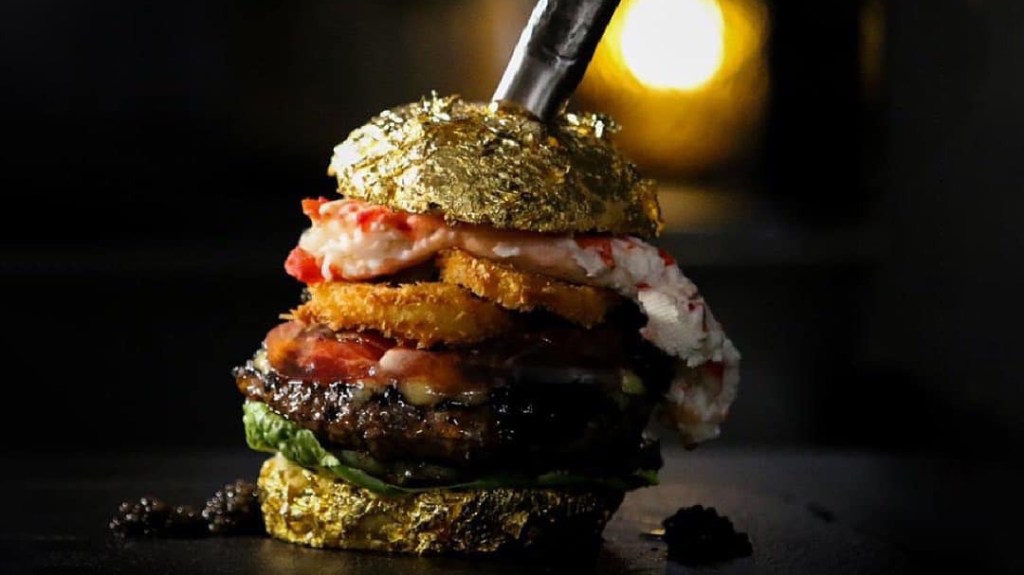 When someone is looking for something cheap and hearty to eat, few items hit the spot quite like a cheeseburger. Still, that hasn’t stopped plenty of chefs from trying to give the fast-food staple the luxury treatment.

The latest is Robbert Jan de Veen, of De Daltons diner in Voorthuizen, Netherlands. The cavalier chef’s burger, dubbed “The Golden Boy” because of its gold-leaf bun, takes something that you can still find on the Dollar Menu at McDonald’s and turns it into a decadent monstrosity that costs more than an Omega Speedmaster.

There have been plenty of expensive burgers over the last decade, but none can compare to Jan de Veen’s brainchild. The reason for its sky-high price? Some of the most expensive ingredients from around the world. It all starts with the patty, which is made from ground A5 Japanese Wagyu beef and chuck short ribs. It’s then topped with white truffles, Paleta Iberico Bellota ham, onion rings with Dom Perignon in the batter, Beluga caviar and king crab. All of this is between two halves of a saffron gold-leaf bun that also has some Dom in it. Even the condiments are luxe, as the “Golden Boy” is served with a barbecue sauce that counts Kopi Luwak coffee and Macallan single malt whiskey among its ingredients. De Daltons describes the burger’s flavor as being “intense” and it’s easy to see why.

So, what the final total for de Veen’s loaded burger? The advertised price is €5,000, or just shy of $6,000 based on today’s exchange rates. That makes it the world’s most expensive burger by a comfortable margin. That title used to belong to a burger at Fleur in the Mandalay Bay Casino in Las Vegas, which cost $5,000. But that burger, which featured wagyu beef, foie gras and black truffle shavings, also included a bottle of 1995 Chateau Petrus from Bordeaux, which accounted for much of its cost.

While $6,000 may sound like too much to some, the first “Golden Boy” has already been sold. Best of all, the proceeds will go to a local food bank, meaning that the unimaginably pricey sandwich will end up feeding plenty of folks.