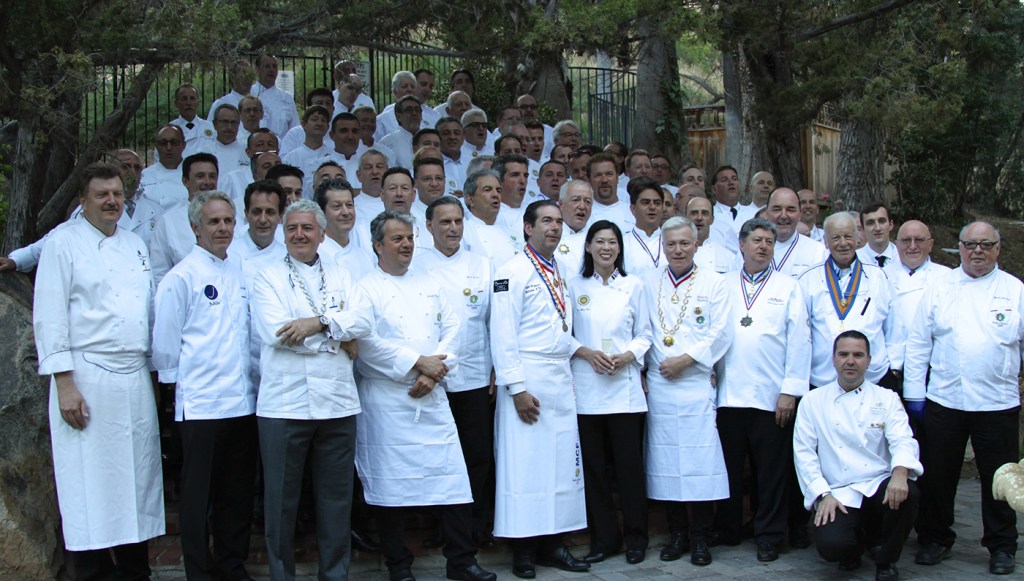 On a balmy Southern California night underneath a canopy of twinkling lights, chefs from across the globe converged for an invitation-only gala dinner to induct up-and-coming culinary greats into the MCF and ACF chef organizations. Founded in 1949, the Maîtres Cuisiniers de France (MCF) is an exclusive group of French-born chefs whose motto is “to preserve and spread the French culinary arts, encourage training in cuisine, and assist professional development.” Throughout the past six decades, the association has bestowed a highly coveted title—Master Chef of France—upon immensely skilled French chefs who have at least 10 years of professional cooking experience and expand the influence and future of French cuisine. (There are currently 71 Master Chefs of France in the United States and around 500 worldwide.) MCF works in tandem with the Académie Culinaire de France (ACF), a group of over 1,000 non-French-born chefs of French cuisine from around the globe, to bring French cooking to a worldwide audience.

A tight-knit group bound by a mutual love for French cooking, the chefs meet annually to explore the current state of French cuisine and discuss recent techniques and technologies. On June 4 through 7, dozens of MCF/ACF chefs gathered in San Diego, Calif., for a series of seminars, product demonstrations, and, of course, mouthwatering meals.

Chefs Bernard Guillas of the Marine Room and Patrick Ponsaty of Bellamy’s Restaurant (the only two MCF/ACF chefs in San Diego) hosted the event. The get-together kicked off with a luncheon at Guillas’ seaside restaurant. Stormy waves crashed against the building’s exterior as guests dined on red-walnut-crusted Alaskan halibut, pork cheek and foie gras, and an array of desserts including macaroons, chocolate pyramids, and port sorbet.

“This year’s MCF/ACF Congress was the first time that San Diego played host to such a significant event, and the first time hundreds of my colleagues have had the opportunity to come together in California,” Ponsaty stated. “The fact that this year’s Congress was hosted in Southern California speaks volumes not only to the growing number of incredibly talented Master French Chefs seeking out the region as the perfect place to develop new concepts, but also their dedication for continuing to lead French cuisine forward in America.”

While the four-day-long festivities were characterized by informative sessions and delicious cuisine, the crème de la crème of the event was the red-carpet gala dinner on Monday night. Taking place at the Ranch at Bandy Canyon—a nearly 200-acre ranch with miles of winding trails, beautifully manicured vineyards, and over two dozen horses—the gala was an affair to remember. Guests mingled around the grounds, sipping cocktails and listening to live music, as they waited for the meal to begin.

Four courses (as well as an amuse-bouche and dessert) were prepared by local chefs and served with wine pairings. Chef Guillas’ first course—a flawless trio of fresh ahi tuna, hiramasa, and vanilla-scented lobster—wowed guests and set the tone for a night characterized by refined comestibles. Chef Bruno Lopez fixed the second dish, a medley of succulent suckling-pig terrine garnished with English peas and a Bing cherry gastrique. The third course—pan-seared sea bream in a piquillo pepper emulsion—was cooked by chef Thomas Bellec. And host Patrick Posaty’s veal loin, stuffed with veal knuckles and sweetbread and served with orange veal reduction, was a fitting finale. During the ceremonious dinner, chefs Patrice Caillot, Jonathan Dendauw, Bruno Goussault, Christophe Joignant, Olivier Reginensi, and Fabrice Guinchard were inducted into the MCF; and chefs Jonathan Dendauw, Thomas Keller, and Carlos Oliver were inducted into the ACF. (mcf-acfcongress.com)