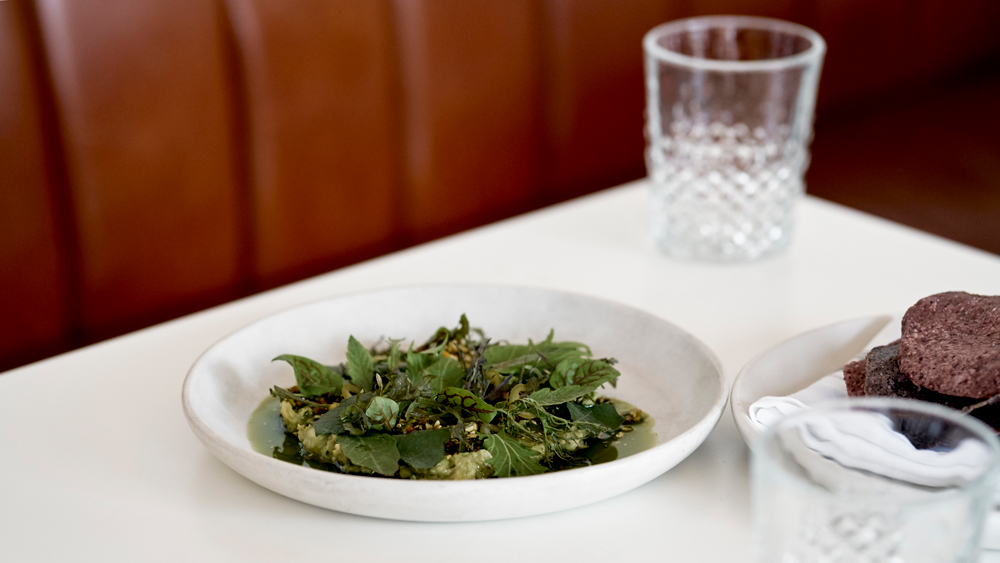 Remember when straws were the dining topic du jour? It seems like a lifetime ago now, back when everyone was talking about waste, sustainability and sea turtles. Because in the past year, restaurants have been forced to switch to a takeout-focused model, bringing back lots of plastic and Styrofoam (and straws) in deference to survival.

However, Justin Bazdarich, the chef and owner behind Greenpoint, Brooklyn’s Michelin-starred Oxomoco and the new Xilonen, is ready to refocus the conversation.

“I was getting so frustrated because we’d order takeout at home and 50 plastic containers would come,” he said. “It doesn’t seem like one restaurant could cause much damage, but there’s 85,000 restaurants in New York City doing the exact same thing.”

So at his restaurants, which also include the wood-fired pizza joint Speedy Romeo in Brooklyn’s Clinton Hill, he worked with the group Oceanic Global to drastically reduce his plastic usage, introducing highly compostable takeout containers and fiber straws. Trash bags and gloves are pretty much the only thing left in his kitchen that’s made from plastic.

But he didn’t stop there in his eco-friendly pursuits. In 2020 he enrolled in the School of Sustainability at Arizona State University (ASU) and in December, he soft-opened Xilonen, a Mexican restaurant that has an almost entirely vegan menu.

“All of the restaurants I own and have opened have been selfish in the sense that it’s just what I want to eat,” he said. “[Vegan food] is what I would like to eat more of, and I’d like that food to be more accessible than it already is. ‘Vegan’ gets a bad rap. There’s a lot of vegan food out there, but to me, it’s always sort of fallen flat.

“Our goal was to make really craveable vegan food. And I think Mexican food allows for that because there’s so many flavors and ingredients native to Mexico that can make the food exciting and delicious.”

Bazdarich’s interest in vegan cooking began when his wife was pregnant with their first child a few years ago. She developed a taste aversion to meat, so the couple stopped eating much of it at home. He quietly began changing the menu mixes at his restaurants, too, making them 25 percent vegan, 25 percent vegetarian, 30 percent sustainable meat and 20 percent sustainable seafood.

His studies at ASU have opened his eyes to global initiatives to impact the food system, like those through the United Nations, and given him better questions to ask his purveyors. In 2021 he hopes to launch a Chef Collaborative Initiative, reaching out to the many associates he made while working at Michelin-starred Jean-Georges restaurants for years and asking, “Who else wants to come along on this [mission]?”

“I want to be like my guy [Jean-Georges Vongerichten] one day, but I want to do it in the gentlest way possible,” he said. “Chefs can have a huge impact on climate change and enlighten people. We can be of service to our bodies, serving food that’s as nutritious as it can be while still being delicious. And we can also be of service to the planet, making the restaurants act in all these sustainable ways.”

He had intended to blow up his vision to a grand scale and open a large vegan restaurant in Manhattan recently, but the pandemic killed that plan. The city died, according to Bazdarich. Tourists stopped coming, the professionals who lived there fled to their summer homes and students who studied in the big universities traveled back to their hometowns. He was forced to shutter the Lower East Side location of Speedy Romeo.

Brooklyn, however, where he lived and operated two restaurants, was still very much alive. So he and his partner, Oxomoco’s co-owner, Chris Walton, invested in an existing restaurant space near McCarren Park, made some minimalistic cosmetic changes (led by designer Marshall LaCount) and opened the doors to Xilonen (named for the Aztec goddess of young maize) soon after.

The menu is 75 percent vegan, 25 percent vegetarian, with some eggs and dairy. The heirloom corn, coffee and chocolate (which is found in the restaurant’s signature Oaxacan hot chocolate) is all fair trade and sourced from Mexican farmers. While there are a few vegan cheeses, sour creams and queso made from nuts, most ingredients are completely recognizable.

One dish in particular could fool carnivores: the green “chorizo,” which is made using minced tofu, smoked pecans and roasted oyster mushrooms. The combo is spiced with a traditional green chorizo paste from Mexico City and put in a quesadilla with black bean-avocado salsa.

“You have no idea it’s not meat,” Bazdarich said. “That was sort of our mission from the very beginning. We didn’t want to use Beyond Meat or any of those types of things; we wanted to manipulate real [ingredients] and allow the plates to be the star.”

The menu is a collaboration with chef de cuisine Alan Delgado, who Bazdarich recruited from Austin, Texas, where Delgado had been working at Launderette and Counter.3.Five.VII, among other restaurants. Delgado had grown up in El Paso, eating and cooking plant-based Mexican food with his mother, and he still had a passion for preparing vegan dishes. So in 2020, he joined Bazdarich’s team as director of R&D. Also that year, he received the StarChefs Rising Star award.

“We’d love to be able to scale this restaurant into an offshoot in the future so that we can provide this type of cuisine to more people, to decrease meat in people’s diets,” Bazdarich said. “The demand is out there. I know it is.”

His hunch seems to have been correct. When indoor dining was permitted in the city again in February, Bazdarich expanded his dining hours and said sales doubled in a week. (Luckily, most of his staff had already gotten at least one dose of the vaccine.)

“[Diners] were champing at the bit to [eat inside again],” he said. “People have just been cooped up for so long and the winter was making it extra tough. To get out and be able to be served … People are ready.”