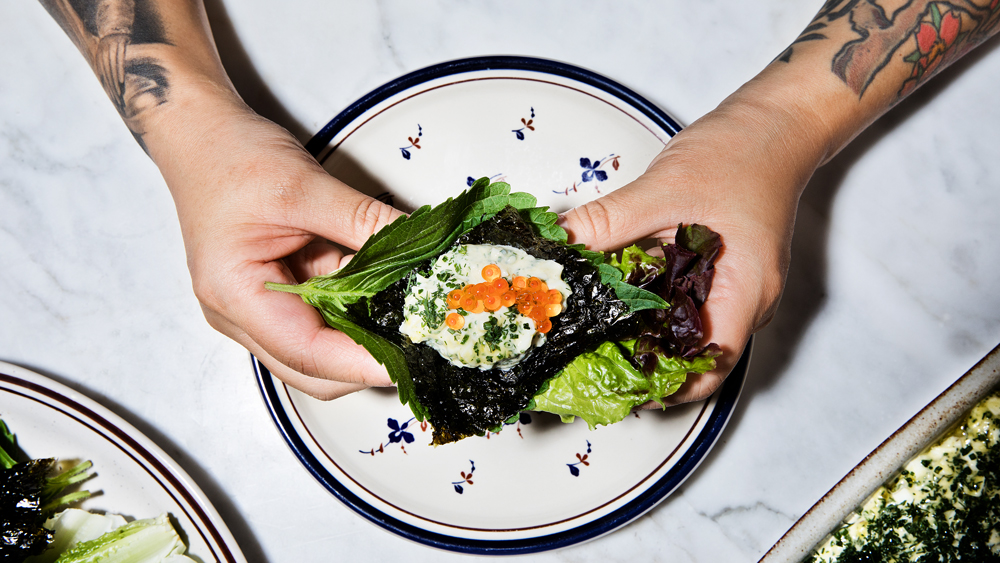 Yangban Society, the Los Angeles deli and market that power-couple chefs Katianna and John Hong opened on Monday, is about blending cultures while creating their own culinary language.

“By no means are we trying to elevate Korean food or modernize Korean food,” Katianna says. “We’re just trying to find a cuisine that’s authentic to us and our experiences being Korean-Americans.”

Dishes at Yangban Society in LA’s Arts District include a pea-shoot-and-chive salad that’s a riff on the raw scallion banchan at Korean barbecue restaurants. There’s a rice bowl with black bean sauce that’s a nod to both Korean jajangmyeon and the Bolognese that Katianna learned to cook early in her career, at an Italian restaurant in Las Vegas. The Hongs are working on fuyu persimmon kimchi, which came about after their daughter’s daycare teacher gave them some persimmons but is inspired by the fresh, garlicky, spicy and crunchy kimchi John’s mother makes.

The Hongs have fine-dining chops to spare. They met when they were working at LA tasting-menu destination Mélisse and both later became chef de cuisine at Napa Valley’s Michelin three-star the Restaurant at Meadowood (a role that John took over after Katianna left Meadowood to open the Charter Oak). But they’ve long thought about doing something more personal, and they’re glad to be doing it at a moment when other Korean-American chefs are also flipping the script.

“The second generation of Korean-Americans are coming of age,” John says. “They’re exploring fun ideas and thoughts. I think my parents’ generation was very much focused on immigrating, finding work, finding stability, finding opportunities for their children. What you’re seeing now is those kids going off and being more creative, having the luxury to be a little bit more free-thinking, risk-taking.”

Yangban Society celebrates Katianna and John’s love of delis (especially the Jewish and European delis that she frequented in New York and that he visited in the suburbs of Chicago), but it also grew out of a trip that the Hongs took to Korea in 2012. Galvanized by what they ate and experienced, they decided to learn more about regional Korean food.

“Our goal was to study Korean cuisine,” Katianna says. “And as much as we are always still learning and continuing our education, we started to realize that it felt a bit forced and wasn’t really us. So then it started kind of morphing into like, well, we can still be cooking with Korean ingredients and respecting the history of the cuisine but cooking in a way that makes sense to us and is more relevant.”

Where to eat and listen to early-aughts hip-hop.  Photo: courtesy Wonho Frank Lee

So the Hongs, for example, are serving a Korean dumpling soup based on a matzo ball recipe from Katianna’s Jewish grandmother.

Sometimes, of course, chefs follow a playbook and then realize they should create a new playbook. These former tweezer-food superstars are happy to have a counter-service restaurant with kimchi-and-pork-belly posole on the menu and milk-crate seating in the alley. They’re happy to let guests seat themselves in the two-floor space that was previously home to Lincoln Carson’s Bon Temps. They’re happy to showcase a vintage ticket machine from an old deli and playlists that are heavy on ’90s and early-aughts hip-hop. They’re planning to serve “very aggressively brined” rotisserie chicken, which guests can pair with canned cocktails, wine, Hite beer or Yangban Society’s custom makgeolli collaboration with local brewer Sawtelle Sake before enjoying Double 8 Dairy buffalo-milk soft-serve. The Yangban Society space also includes a “super,” a little market with four refrigerators full of beverages alongside merchandise from local artisans.

“We really wanted this to be where you kind of make your own experience,” Katianna says. “If you want to come in and spend $25 and grab lunch quickly and sit at the counter, you can do that. But if you’re celebrating and want to stay at a banquette with your friends and buy champagne and upgrades with caviar, you can do that, too.”

And while the menu and service model will be the same during the day as it is in the evening, the Hongs would love to see things get more raucous at night.

“What I hope is that it gets a little rowdier, a little more fun,” Katianna says. “The music goes a little louder, lights get dim and people really relax. I love that feeling of night markets in Asia. We want this where there’s like bottles all over your table and you keep hopping up and going into the super and trying different beverages and different things. If you spill a drink on the floor, it’s not a big deal. It should have a lot of energy at night.”