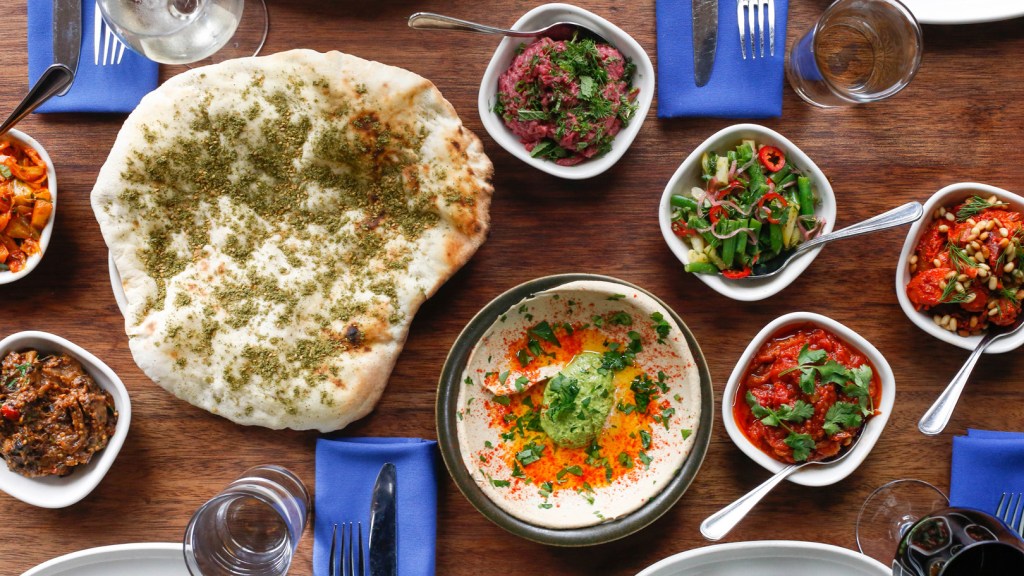 America is embracing Israeli cuisine. Down in New Orleans, Alon Shaya is creating his take on the food of his heritage with Saba and will soon open Safta in Denver. In Portland, Tusk chef Sam Smith is approaching the cuisine from an outsider’s perspective and winning raves. Modern Israeli thrives in numerous locales in New York from Nur to Bar Bolonat to Alenbi. A veritable Israeli and Middle Eastern boom is happening in Los Angeles with Mh Zh, The Exchange, Kismet, Bavel and more wowing diners across the City of Angels. And last year Michael Solomonov of Zahav won the James Beard Award for America’s most outstanding chef.

When Solomonov opened Zahav with Steven Cook a decade ago, there wasn’t so much hype. After cooking Italian food under talented Philadelphia chef Mark Vetri, Solomonov set out on his own to build his first solo restaurant. The death of Solomonov’s younger brother David, which occurred while serving in the Israeli Army, motivated Michael to connect more to the land of his birth. The chef grew up in Pittsburgh, but visited Israel, and worked in Tel Aviv—the city where he was born. He studied spices and techniques from around Israel, where a melting pot of cultures serve food from across the Middle East.

As he prepared to open the restaurant, people wondered what Solomonov would actually serve. And so much of what was regarded as high end and worthy of praise back then didn’t bear a large resemblance to the kind of cooking Solomonov wanted to do. Yet he crafted craveable and delicious dishes in a casual atmosphere that belied the care given to creating the food. We spoke with Solomonov at the Food & Wine Classic about how he went about creating modern Israeli food in America, not getting caught up in authenticity, and people’s changing definition of luxury in restaurants.

Opening Zahav, what were the misconceptions about Israeli food?
Well it was that nobody knew what it was. They were like, is it shawarma, is it falafel? Is it just like Jewish food? And you’re like, “No, it’s sort of all but none of those things.” People just weren’t comfortable. Even the Israeli cooks weren’t comfortable looking at what they grew up with, because it wasn’t considered to be fancy or like in vogue, you know?

How did you create the core of the restaurant’s menu?
We just basically ripped dishes off from Israel and made them at Zahav, and that proved to not work, because people wanted more than that because context is such an important thing. So my shakshuka, even though I think it’s wonderful, it’s not going to taste the same as the shakshuka place in Yafo that overlooks the Mediterranean Sea. It will never taste like that because of the context.

So, we just had to sort of synthesize, and we had to take all the different cultures that make up Israeli cuisine and say, “Well, you know what? We’re not in Israel. We actually get to put all these things together.” Because if you’re in Israel and you want to eat Moroccan, you go to the Moroccan restaurant. If you want Bulgarian, you go to the Bulgarian restaurant. But we have the luxury of taking all those things, because we are third person. We’re in the States. We can do whatever we want.

And we also are limited by the ingredients that we have, but actually that allowed us to help be more of a conduit from Israel to eastern Pennsylvania, and in a way it helped to find what our restaurant, and what our responsibility was.

Did you find a core philosophy to Israeli cuisine that you could draw upon?
No, the issue is that we have to consider all the things that we want. We want to consider the traditional dishes and gastronomes, so you have to have a philosophy for like 100 different cultures. Then we have to consider what produce we have access to that is great. And that helps determine the menu. We give stipends to farmers and say, “Bring whatever you want and then we’ll adjust.”

We then use spices and techniques to guide the food. If you’re using ingredients that are specific to eastern Pennsylvania and you’re trying to express something from North Africa, you need to do a little bit of homework, and you need to manipulate, and spices are a very easy way to do that.

What’s the biggest change you’ve made in the decade?
Well I think that instead of taking a dish that you’d have in Israel, saying “There are multiple dishes that I’ve had in one meal, and this is what we have, and how we converge them. How do we tell the story?” What I want is for a customer that’s Israeli to come in, and close their eyes, and eat the food, and say, “This takes me back to my childhood, but I’ve never had it presented in this way.” You’re using Brussels sprouts, asparagus, and snap peas, and we don’t have those things in Israel, but when we take the Brussels sprouts and we burn them over charcoal, and mince them with tahini, we’re making essentially Baba ghanoush, but we’re not using eggplant, we’re using something that is ours.

Was there any concern about authenticity?
Authenticity in food doesn’t mean that much. Authentic is like particular to the side of the street that you live on in Piedmont, or how far back you want to go. So, you know, somebody else had conquered the land. So authenticity is just sort of a weird, ambiguous thing, right?

Sometimes the word is used as a compliment: “I went to this one restaurant and it’s great—it’s authentic.”
It’s authentic until it’s not, then it belongs to someone else. Food travels and changes. That’s the one constant, it’s always adapting. We used to own a Texas barbecue restaurant in Philly and we would get so much crap from everybody—mostly because we didn’t serve pulled pork the first three years, because we were like, “Nobody has pulled pork in Texas.” But that’s not true. And when you go to Texas it’s not like Smitty’s and Black’s make brisket the exact same way. Is one more authentic Texas barbecue than the other? There’s no one way to make anything.

I’ve heard you say “people’s definition of luxury is changing,” how so?
What it used to be was going to a fancy restaurant and getting a sick bottle of wine, and have a four-hour tasting, but it’s just not what people want now. And personally speaking, my food memories that have made me excited to be a chef, they aren’t from sitting in fancy restaurants. They are like, I don’t know, eating my grandmother’s food—it’s trying something that has a bit more depth to the creativity.

Usually, it’s context, right? It’s like traveling to Spain, or France, and stumbling upon one olive oil producer here, and you’re like, “Wow, this will affect the rest of my life, the way that I touch olive oil, how I feel about it.”

In France, some of the grand houses of dining can feel airless. The Bistronomy movement was a reaction to these high-end restaurants starting to feel like they were checking boxes for Michelin. Did you feel that?
Yep, yep. Where you feel like one place gave you the same experience you’d get anywhere. We were just eating recently at a restaurant that was delicious, it was very good, it was very traditional in that way. All the food had all the right things, the composition was great, the plating was great, the service was great, but we left and you’re like, “I don’t know. Really? Is that it? Come on, I want to be moved, I want to be affected.” You can give them something that they’ll remember and sort of appreciate. It’s ok to give great service in a T-shirt, it’s ok to play loud music, and it’s ok to break some of the rules that were traditionally associated with being a high-end restaurant.

How so?
Because it was casual, but also high-end. We describe our restaurant as fine dining but disguised as casual. The standards are all the same. I mean, service is more relaxed—people aren’t wearing tuxedos.

Is the pendulum swinging back toward more formality? I think of a place like The Grill which is pretty grand.
Yeah, theater is important. I don’t think the theater, though, necessarily articulates the stuffiness that we were experiencing, because there’s irony in it. When you go to guys behind The Grill’s Italian restaurant, Carbone, they’re great and they nail it. There’s this ode to the past and to the restaurants we grew up thinking were a hallmark of good cuisine. But it’s just fun.