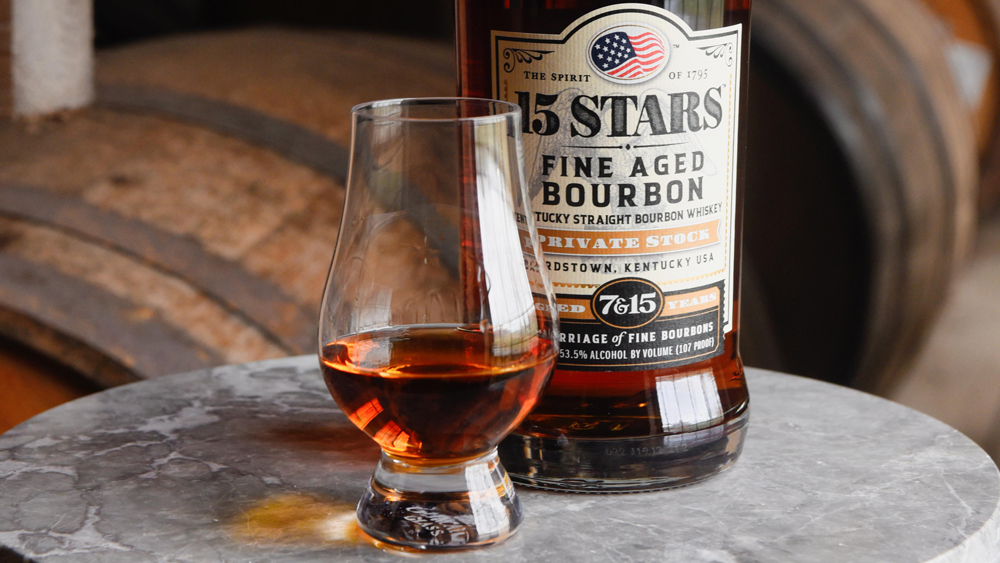 Whiskey fans know that bourbon is made from a mash bill of at least 51 percent corn, but could popcorn corn also be used as a key ingredient? The father-son team behind new bourbon brand 15 Stars thinks so and started making bourbon from heritage and heirloom corn used for their popcorn brand Black Jewell. We won’t get to taste this whiskey for a few years, but in the meantime the guys have a new sourced bourbon to check out.

15 Stars is named in honor of Kentucky being recognized as the 15th state in the Union in 1795, leading to 15 stars and stripes adorning the American flag. About three years ago, Rick and Ricky Johnson decided to try making bourbon from the aforementioned proprietary corn they use for their popcorn, which they claim has never been used to make whiskey before. This corn is grown in Kentucky, Indiana and Illinois. The heirloom baby black corn is part of a mash bill of 70 percent corn, 18 percent wheat and 12 percent malted barley, and is aging in char No. 4 new American oak barrels. The patriotic-themed red, white and blue corn are distilled separately, and also blended together in a mash bill of 73 percent corn, 18 percent rye and 9 percent malted barley. This bourbon is also currently in barrels aging until ready to bottle.

The Johnsons partnered with Bardstown Bourbon Company on these future whiskeys and have also been sourcing aged stock to blend for the current 15 Stars releases, which have been getting a lot of positive attention. The newest expression is 7 & 15 Year Private Stock Bourbon, which as indicated by the name is a blend of 7- and 15-year-old Kentucky bourbon bottled at 107 proof. The inaugural release, 14 Year Timeless Reserve, hit shelves last spring. According to the Johnsons, they use a system of “flavor proofing,” or essentially deciding on the final proof of the whisky by sampling to see what the best strength is for drinking neat. So the odds are you are not going to find any 80 proof bourbon from 15 Stars in the future.

These bourbons have relatively limited availability, but they can be purchased from online retailers. It’ll be a couple of years before the heirloom corn mash bill bourbon will be ready, but hopefully it will be good enough to make you reach for a bottle instead of a bucket of popcorn the next time you watch a movie.