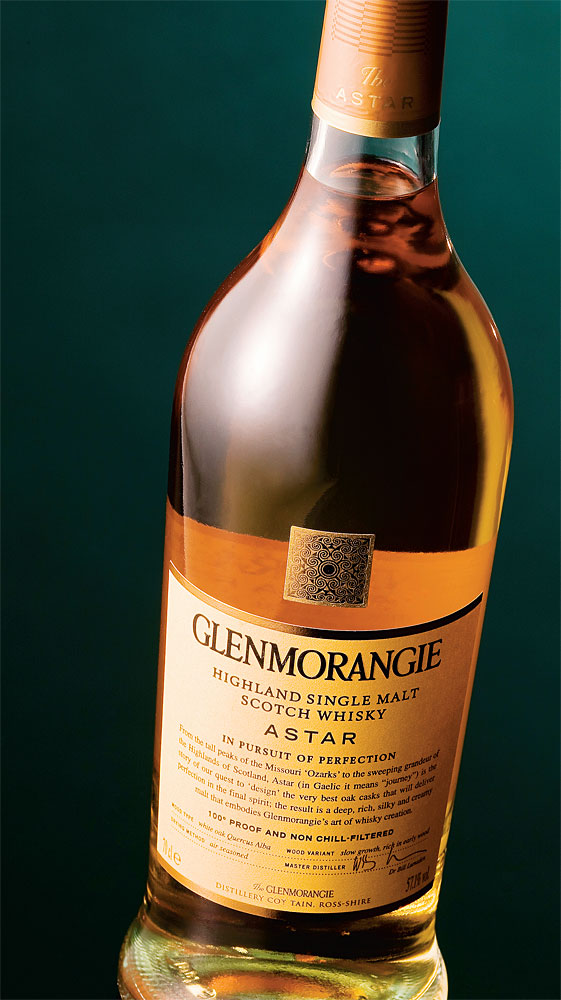 Nothing affects the flavor of a whisky more than the wood in which it is aged. To that end, the 2009 release of Glenmorangie Astar (Gaelic for “journey”) has been aged in slow-growth, fine-grain American oak barrels. Harvested in 1985 from specially selected trees in the Ozark Mountains, the wood was seasoned by the rain and sun of Kentucky’s open air for about two years to break down its internal structure and release softer, sweeter flavors. Once formed into casks, the oak was heavily toasted to release almond and coconut characteristics, and then filled with Tennessee whiskey to diminish any remaining raw wood notes. After they were emptied, the casks made their final journey to Glenmorangie Distillery in Speyside, Scotland, where they were filled once again with fresh distillate. Exposure to this wood has yielded a smooth, rich, spicy whisky full of fruit and vanilla-pudding flavors. At full strength, the nine-year-old Glenmorangie Astar shows a dessertlike character, consisting of toffee, crème brûlée, milk chocolate, coconut, and toasted almonds, with fresh mint, cinnamon, and aniseed. This single-malt scotch is scheduled for release in the United States this January, at a suggested retail price of $90.