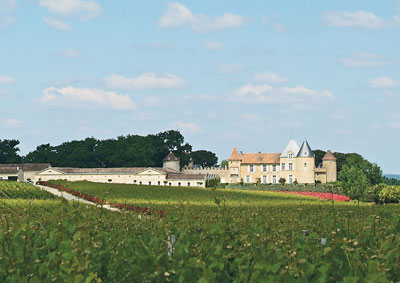 A collection of Château d’Yquem that includes at least one bottle of every vintage produced from 1860 through 2003.

A pair of walnut wine cabinets designed by David Linley to house the collection.

When Stephen Williams acquired this Château d’Yquem vertical assemblage two years ago, it was comprehensive, but not yet complete. Frenchman Didier Segon had begun amassing bottles of the sweet Sauternes during the 1960s and continued to do so until sometime in the 1980s, when he sold the collection to an unidentified Englishman, who in turn sold it to Williams, the 48-year-old founder and owner of the Antique Wine Co. of Great Britain. “It was about 90 percent complete then. What we’ve done is complete it, but we’ve also changed some of the bottles for absolutely perfect bottles,” Williams says, explaining that he replaced the bottles that had slightly marred labels, corks, or capsules, the term for the lead foil that covers the top of the cork.

The collection now contains one of every vintage that Château d’Yquem released from 1860 through 2003—135 bottles total. (The winery did not produce a wine from nine of its harvests during that 143-year span.) Williams can provide duplicates for 68 of the individual vintages, enabling you to acquire, for example, two bottles of the 1865 and two of the 1921, both of which Williams describes as “magnificent—they still taste like 10-year-old wines.” Adding all 353 of the available extra bottles to the gift would increase the price to $3 million. Château d’Yquem has been producing wine commercially since 1786, but, Williams says, 1860 is the earliest vintage from which he can offer an unbroken line of Château d’Yquem. “If I found an 1859 tomorrow, I would add it, but the chance of going back further is very, very remote,” he says, noting that he does have an 1811, which he is not including as part of this gift.

Williams expresses no doubts about the drinkability of the older d’Yquems. “We know they’re going to be good, because in many cases, they were recorked by Count Lur Saluces [Comte Alexandre de Lur Saluces, who ran Château d’Yquem from 1968 to 2004],” he says. “They were tasted then, and provided they were good, they were recorked.”

Williams commissioned British furniture designer David Linley to create a pair of cabinets to house the collection. Made from walnut inlaid with burr walnut and ebony, each cabinet measures 58 inches tall by 51 inches long and 21 inches deep and can accommodate 80 bottles.

A licensed pilot, Williams will fly the Robb Report reader who buys this gift from England to France in a Citation CJ2 for a two-day sojourn in Bordeaux, during which you will visit Château d’Yquem; meet the winery’s president, Pierre Lurton; enjoy a tasting of more-contemporary vintages; and lunch with Comte Lur Saluces. (Williams will make different arrangements for the return trip to England.)

Williams, who sold a smaller d’Yquem collection in 1996 for $1 million, says that this vertical is without peer. “It’s impossible,” he says, “for anyone to build something like this in today’s world.”