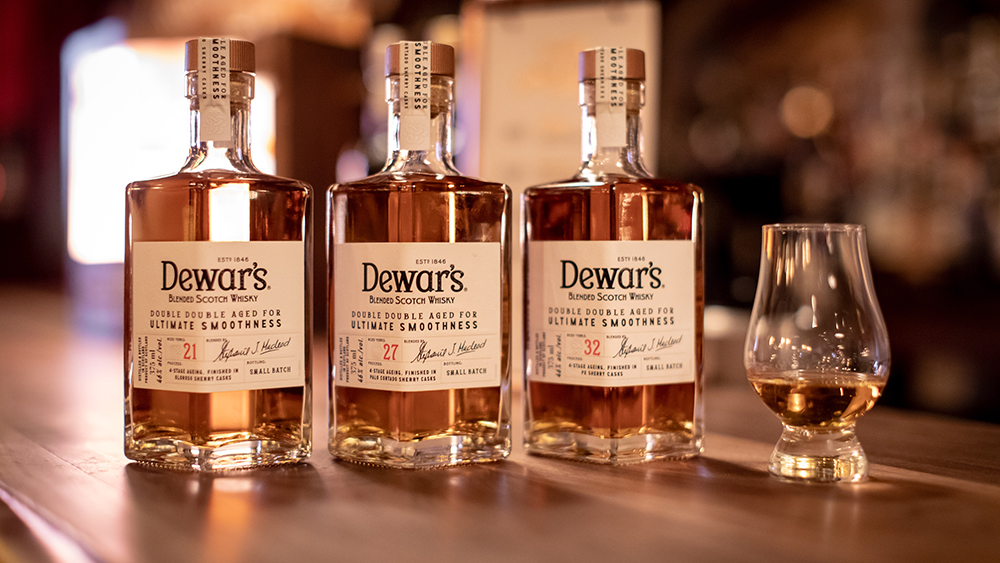 With so many new whiskies available in the marketplace these days, it can be hard for even the most devout devotee of drams to keep up. Fortunately we’ve got you covered, friend. Not only am are we professionally obligated to stay on top of such things but, heck, we love that beautiful brown liquid same as you. Having sampled somewhere in the neighborhood of ten recent new whiskies, we humbly submit these standouts.

For the first time in five years, Dewar’s has rolled out a new range. Dewar’s Double Double is a collection of three expressions—a 21-, 27- and 32-year-old—aged in a four-step process unlike any other in the blended Scotch whisky category. It’s complicated chemistry, but suffice to say it involves lots of marrying of different whiskies and moving the blends between ex-bourbon casks. Ultimately the whiskies are finished in three different types of Sherry casks: Oloroso for the 21-year-old ($50), imparting subtle notes of cinnamon and ripe vine fruits with a velvety finish; the 27-year-old’s ($100) final resting cask is Palo Cortado, lending heady floral notes with honeyed fruits and suble spice; and the 32-year-old ($150) did its time in Pedro Ximénez casks that deliver a cotton candy note, tinged with a hint of smokiness.

When WhistlePig’s master distiller Dave Pickerell died of heart failure in November of last year, the spirits world lost one of its luminaries. Fortunately, the man known as the “Johnny Appleseed of Whiskey” left something special behind. The just-released WhistlePig PiggyBack Rye Whiskey ($50) is one of Pickerell’s final creations. It’s a 96.56 proof, aged rye specifically designed and priced for making cocktails. (If you’re looking to sip some WhistlePig neat, try the big-ticket Boss Hog). On the nose, PiggyBack Rye comes correct with cinnamon, black peppercorn and grapefruit zest. The flavor profile is highlighted by dark chocolate, ginger and leather, with some dry spiciness courtesy of the rye. Closes with baking spices, oak, and a smidge of caramel.

Travelers in and around Asia got a taste of Jack Daniel’s latest expression last year, and now it’s made its way back home to America. Jack Daniel’s No. 27 Gold Tennessee Whiskey ($100) differs from the original article in that after the traditional charcoal filtration and maturation period in new charred American white oak barrels, the spirit is finished in maplewood barrels and filtered through charcoal a second time. This twice barreled/twice mellowed process yields what is arguably the smoothest Jack ever, and undoubtedly the richest (unless we count the ill-conceived Jack Daniel’s Tennessee Honey, and let’s not). Maple syrup, toasted oak and honey are the dominant notes in this amber-hued dram, which clocks in at an easy-drinking 80 proof.

This Kentucky straight bourbon comes courtesy of a creative collaboration between Jim Beam legend Fred Noe and his Beam Suntory colleague, Japanese whisky chief blender Shinji Fukuyo. The two cooked up the idea after sitting through a bunch of meetings together. So they used the mashbill of a great Southern bourbon but finished the whiskey in premium wine casks and Fukuyo blended the barrels artfully to become one. The result is a delicious mashup of caramel heat and fruity notes of fig, dates and black cherries with a lovely nutty quality that takes Kentucky bourbon to an entirely new place on the flavor map, which was Noe’s goal.

This limited release is also a Kentucky straight bourbon, and it’s pretty magnificent at age 22. Coming from the renowned Stitzel-Weller Distillery, Blade and Bow has a strong and passionate following of whiskey connoisseurs. Having opened its doors on Derby Day in 1935, Stitzel-Weller continues to celebrate by releasing a delicious iteration around the start of May each year. This year’s is a re-release of the 22 year old bourbon ($300). It’s smooth and gentle at just 92 proof and is a perfect balance between spice and sweet, fruit and heat.