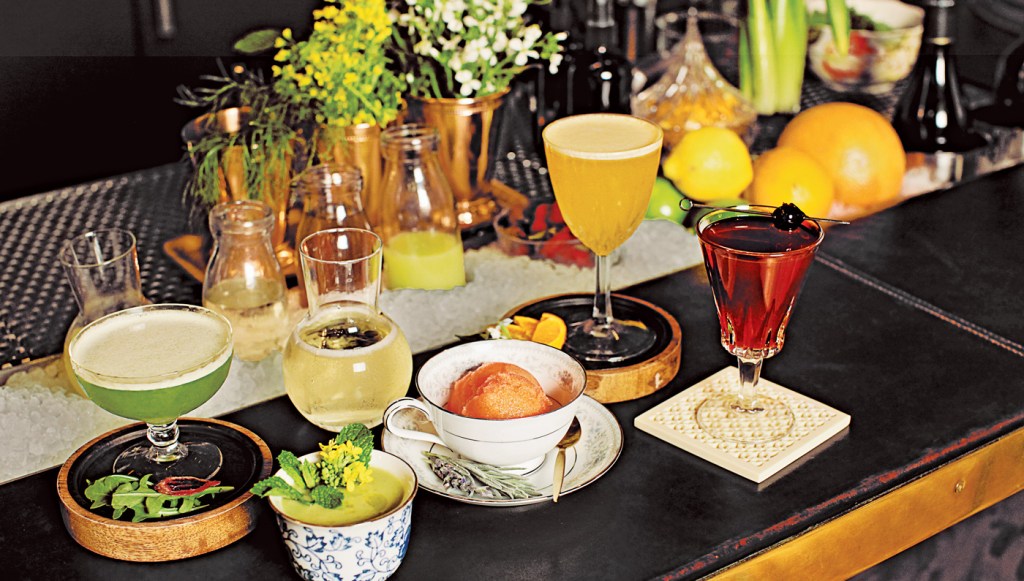 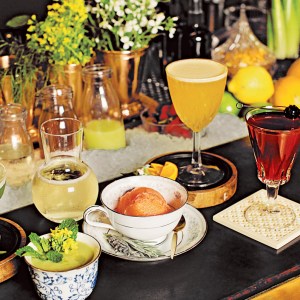 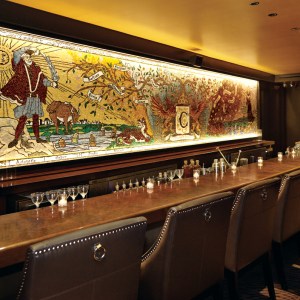 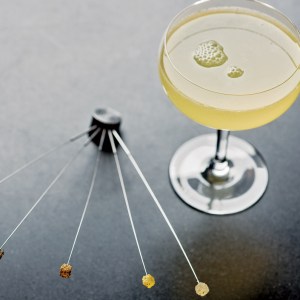 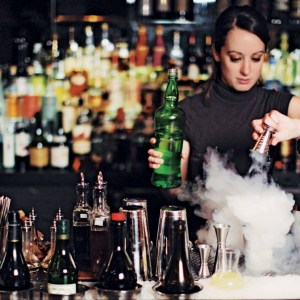 Some of the country’s top mixologists are creating leisurely, omakase-style tasting menus that will astound even the most jaded drinkers.

The bartender has just presented me with a cocktail, but it is so much more than a cocktail. In fact, it is a miniature Zen garden: The lightly frothy, sake-based drink comes perched on the edge of a wooden square covered in plum-flavored edible pink sand. A tiny rake is placed alongside, prompting me to drag it through the sand and think deep thoughts as I sip a concoction that tastes of plums and springtime.

It is one of five drinks that will be served over the course of an evening at the Columbia Room in Washington, D.C., one of a handful of exclusive bars around the country that offer omakase cocktail menus. This style of service—modeled after traditional Japanese omakase tasting menus—represents the apex of modern mixology and takes the art of the cocktail to its most extreme. As with an omakase meal, you can expect a leisurely pace over at least a couple of hours and a multicourse menu that feels like a cohesive journey rather than just a series of drinks. Reservations are usually required, often through a nonrefundable ticketing system, and those tickets can be scarce and pricy. But the level of creativity and technical skill that goes into building the experience is far beyond that of even the best craft-cocktail bar.

The Columbia Room, one of the first bars in the country to offer omakase-style drinking, was created by bartender Derek Brown in 2010. The original bar closed at the end of 2014, but earlier this year it rose again in a new location, serving even more intricate menus in a 14-seat space that also houses a rooftop Punch Garden and a traditional cocktail lounge called the Spirits Library. In recent years, other ambitious bars have begun offering multicourse cocktail menus, including the Aviary in Chicago, where owner Grant Achatz and his team apply the same modernist techniques to cocktails as they do to food at Alinea, Achatz’s Michelin-starred restaurant. The nine-course menu at the Aviary’s “kitchen table” pairs cocktails with food­­, perhaps matching an Infernal Imagery—made with Dry Sack sherry, sweet vermouth, tequila, and cinnamon smoke—with wagyu rib eye. At Blue Ribbon Downing Street in New York City there is no set menu; rather, each three-course omakase experience is created on the spot for the individual guest after a conversation with the bar staff. Likes and dislikes, mood, and personality are all taken into account for what becomes a collaboration with the bartender.

In Los Angeles, a particularly innovative omakase menu has made the Walker Inn one of the most exciting new bars in the country. Hidden at the back of the larger Normandie Club, the Walker Inn is a 27-seat jewel box serving a cocktail menu that changes every 6 to 8 weeks, each menu based on a single point of inspiration. Last spring, the “Alice Waters” menu was filled with seasonal produce and complex culinary creations, while a more recent summer menu mused on the idea of climate with drinks that evoked the tropics or the damp grassy fog of a rice paddy. To achieve results like the Rice Paddy—an ethereal, velvety drink made with unfiltered sake, tequila, cachaça, green apple, and mint—the bar team begins its work in a remote kitchen. As a customer, you would never guess that a drink assembled in minutes before your eyes required hours of prep before the bar opened, and that its components, arrayed before the bartender like bottles of potions, have likely been through a centrifuge or sous-vide machine.

“We knew we wanted it to feel like a very special room where you go and you feel decadent without it being snobby,” says Devon Tarby, a co-owner and bartender at the Walker Inn. The common “bartender’s choice” approach to craft cocktails—the practice of ordering a drink but allowing the bartender to decide exactly what it will be—spawned the Walker Inn’s approach. “We thought, what if we knew exactly how long we had with a guest?” Tarby says. “What if that interaction and conversation could last longer than one or two drinks?”

Because of limited reservations, menus can be more involved and creative than anything in the less predictable format of a regular bar. For example, on the Alice Waters menu, the night begins with an ode to Meyer lemon, one of the chef’s favorite flavors: an aromatic drink made with sherry and French vermouth and a sidecar of invigorating house-made Meyer-lemon soda. When sipped side by side, the flavors are transporting, like tasting the breeze of a citrus grove in full blossom. Another drink was a version of a green gazpacho Tarby makes at home: a bracing cold soup of avocado and cucumber, transmuted into a cocktail with the addition of vermouth and green-chili-infused vodka. And yes, Tarby has considered the buzz that comes after drinking many cocktails in one sitting, so drinks often have lower alcohol levels or are served in smaller portions.

At the Columbia Room, Brown was also inspired by the idea of full creative control. “We wanted to see what would happen if you took the customer’s ego out of the equation and asked them to give themselves over to a bartender at their most creative,” he says. “We wanted to take people on an adventure.” Small bites of food accompany each drink, a form of pairing that harkens back to Brown’s days as a sommelier. Word got out that something special was going on in that back room, and the experiment took off.

At the new version of the Columbia Room, that magical feeling of being tucked away in a hidden room completely removed from the world outside is particularly intense. The black facade of Brown’s establishment, located on Blagden Alley, has no sign, just a street number. The doorman will know your name if you have reservations, and will whisk you up through the festive Punch Garden and deposit you in the Spirits Library, where folks are sitting on comfortable chairs and partaking in selections from the cocktail menu and rare-spirits collection. Beyond, in the actual Columbia Room, you can sit on a fat leather chair facing the 14-seat bar and a striking, intricate mosaic that covers the back wall. The mosaic, which was made in Italy and shipped to the United States in five pieces, depicts the bar’s crest, mythical beasts, two huge trees, and words that pay tribute to ingredients and flavors. Along the bottom are names of inspirational people: bartenders, mentors, and philosophers.

The theme for one of Brown’s recent menus was cherry blossoms: Drinks with fanciful titles such as I Never Promised You a Zen Garden nodded to the season, to Japan, and to that country’s most famous flower. A few cocktails in, my companion turned to me and said, “This is like some kind of strange stopping-off point between lives, a magical place to rest before we move on to the next realm.” He was right. The room felt so removed from reality, so calm and fantastical, it barely seemed of this world at all. Maybe it was the booze talking. Maybe our Zen garden had us in a particularly philosophical mood. Or maybe it was the immense creativity and care poured into every ounce of the experience.