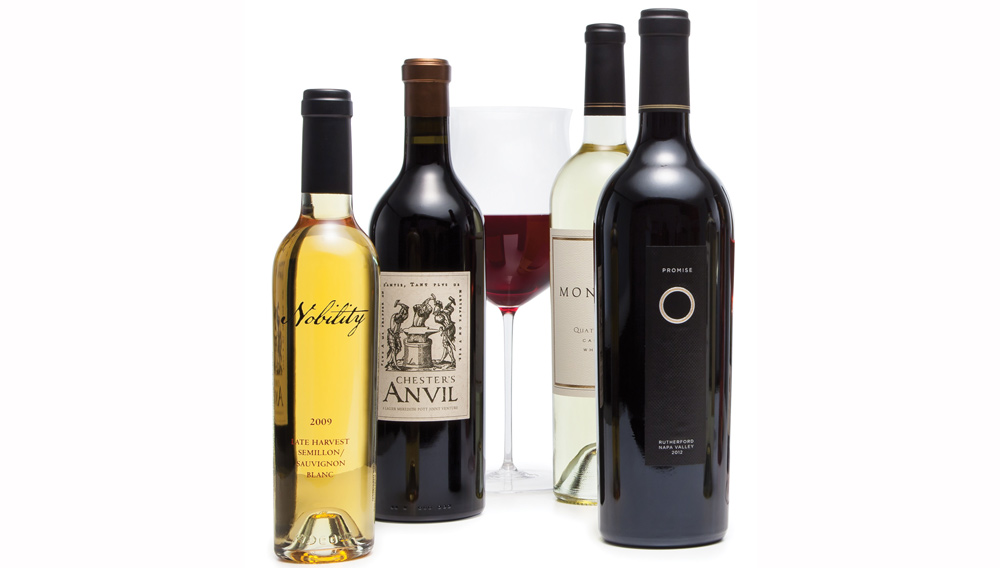 Aaron Pott, one of Napa’s most learned and sought-after winemakers, partnered with his vintner friends and neighbors on Mt. Veeder—Dr. Carole Meredith and her husband, Steve Lagier—to extract from their hillside vineyards a portfolio of wines crafted to be approachable in their youth. The 2012 Hattori Hanzo from the Chester’s Anvil label is a proprietary red blend of Cabernet Sauvignon, Malbec, Cabernet Franc, Zinfandel, and Syrah. Noticeably dark in the glass, the wine reveals intense aromas of black cherry liqueur and blackberry with accompanying notes of mocha and toasted cedar. As soft as velvet on the palate, this uncommon blend displays complex layers of flavors that include red currant. The perceptible earthiness that emerges on the finish is anchored by fine-grained tannins. ($40)

An independent spirit, Bill Tristant emigrated from France to California on his own in 1949 and, decades later, in 1975, had the foresight to purchase acreage in Napa Valley. Now in his mid-80s, Tristant continues to make wine himself, and his single-vineyard, limited-production red blends remain one of Napa’s most enchanting secrets. The 2008 Mirifice features bright aromatics, including black cherry, spicy plum, and a floral essence of dried rose petals. On the palate, the wine is impeccably balanced, presenting a seamless combination of flavor, acidity, and density. Notes of blackberry, dark raspberry, and a tinge of oak-induced sweetness outlast the fine-grained, delicate tannins on the finish. ($55)

Preserving some of Napa’s heritage varietals is no mean fiscal feat, thanks to the relative popularity and profitability of planting Cabernet Sauvignon. Rory Williams, the son of the founders of Frog’s Leap Winery, however, has placed himself at the forefront of growing and managing these varietals, which reflect the region’s early winemaking history. An obscure red varietal, Charbono is primarily cultivated near the northern boundaries of Napa Valley. The 2012 Calder Charbono shows intense and appealing aromatics—bright, lively red fruit with an earthy component to the bouquet. Delicious is an often overused word but this wine certainly could be called that with its appealing flavor profile. The wine shows excellent acidity and an energetic palate that finishes with silky smooth, slightly dusty, well-integrated tannins. ($28)

Since 1984, Canard has quietly produced exceptional Zinfandel from old head-pruned vines—some of the oldest, in fact, in the county. Soon after a vineyard manager recommended that they replant for a higher-yielding varietal, owners Rich and Carolyn Czapleski received a call from legendary vintner Robert Mondavi, who urged them instead to preserve these historic vines. Fortunately for lovers of this quintessentially Californian grape, they heeded Mondavi’s sage advice. The 2011 Canard Zinfandel reveals an elegant bouquet showing a generous helping of fruit that this varietal so often delivers; a raspberry liquor complemented by baking spices and a tinge of vanilla. Harmonious and smooth on the palate, the wine begs another sip, lingering with lively fruit—ripe Santa Rosa plum, raspberry, a sweetness of oak, and graceful tannins. ($55)

Few properties in Napa Valley have, in a relatively short number of years, achieved the stature of Continuum, the brainchild of brother and sister Tim Mondavi and Marcia Mondavi Borger. Drawing on their rich experience as members of one of Napa’s leading viticultural families, Tim and Marcia have focused their efforts on a single proprietary red wine comprising the choicest grapes from their premium hillside vineyards. The 2012 Continuum Estate Cabernet Sauvignon needs time to open—when it does it reveals a depth on the palate that is not only representative of this distinctive hillside vineyard location but what will be the first of three exemplary vintages in a row from the Napa Valley, and most certainly across the board from Pritchard Hill producers. Seamless in its approach, it is full bodied yet beautifully balanced for a young wine. We take delight in its textural feel and long finish, with its suppleness and cohesive, chalky tannins. Cellar if you can, drink now if you cannot. ($175)

As the former president of ABC Entertainment, Stephen McPherson is as much at home in the boardrooms of Hollywood as he is on the vine-covered slopes of Napa, where he and his wife, Jennifer, produce three wines—Cabernet Sauvignon, Pinot Noir, and Rosé—for Promise. Their label’s name references the promise they made to one another when they married: that one day they would pursue their passion for wine. Their 2012 Cabernet Sauvignon shows dark yet elegant fruit aromas; the bouquet is complex and layered and, as it opens, reveals black currant, an earth-like quality, leather, tar, and notes of black cherry framed by hints of mocha. The wine is remarkably balanced for being so young and features well-integrated tannins that are slightly chalky. The finish lingers, giving way to pleasing acidity. ($225)

Brothers Alex and Graeme MacDonald manage some of the oldest Cabernet Sauvignon vines in Napa—60-plus-year-old vines that, incidentally, happen to grow in one of Napa’s most prestigious vineyards, To-Kalon. The MacDonalds have cultivated grapes in the valley since 1954, but the family only recently began making wine. The brothers’ 2011 Cabernet Sauvignon displays power and richness on the palate—certainly not surprising given the other wines issuing from To-Kalon. This red possesses both character and depth yet retains its balance beautifully, especially for a young wine. The lingering tannins are slightly dusty and chalky. ($150)