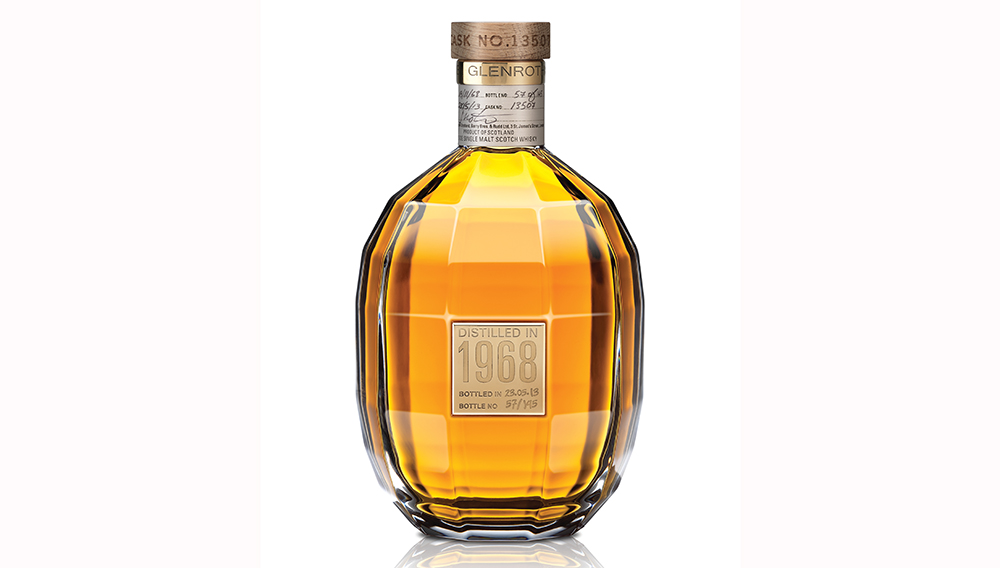 A tipple to be treasured, the Glenrothes 1968 Extraordinary Cask is culled from the contents of a single hogshead cask (No. 13507) filled on November 19, 1968. Limited to only 145 bottles, the 47-year-old single-malt scotch brings hints of rose petals, peaches, and apricots to the nose, followed by mascarpone, orange blossom, and white pepper on the palate. Its dry finish finds leather, spice, and Turkish delight. The golden expression is encased in a faceted crystal decanter bearing a numbered brass plaque and stopper head made from the original cask. A hand-stitched leather case and oak plinth for display complete the premium packaging. (theglenrothes.com)  —Viju Mathew

Tequila is given the recognition and respect it deserves with the limited-edition Patrón en Lalique: Serie 1. The artisans at Lalique drew inspiration from the Weber Blue Agave plant for the design of each crystal decanter and bottle stopper housing the bespoke blend of Patrón’s rarest reserves. Aged for at least four years in new American oak as well as new and used French oak, the extra añejo ambrosia tantalizes the tongue with nuances of caramel, vanilla, and dried fruits that find a balanced complexity upon culmination. Only 500 of bottles have been released, each ensconced in a custom leather case. (patrontequila.com) —V.M.

The Orphan Barrel Lost Prophet Kentucky Straight Bourbon is a 22-year-old Kentucky straight bourbon that was distilled in 1991 in Frankfort, Ky., at what was then the George T. Stagg Distillery. And it was recently discovered at the Stitzel-Weller warehouse in Louisville. With a mash bill composed predominantly of corn along with a touch of barley and rye, this whiskey, which was bottled at 90.1 proof, is thick with wood notes and cherries, tamed slightly by lemon and vanilla, and finishes on a dry, leathery note. Lost Prophet is smooth enough for making a perfect Manhattan and robust enough to be enjoyed on its own with a Nica­raguan puro. (orphanbarrel.com)  —Richard Carleton Hacker

Usually, when one thinks of Japanese rice distillations, the only thing that comes to mind is sake. But that is no longer the case because Suntory, one of the oldest distilling companies in Japan and one of the largest in the world, recently launched Ao Vodka, a unique, flavorful vodka that—diverting from traditional wheat, potato, and rye recipes—is distilled from Japanese rice. Suntory adds to the distinctiveness of this artisanal, pot-distilled spirit by crafting it with pristine water sourced from the volcanic island of Kyushu and using a unique bamboo filtration process. From the first sip, Ao stands out as being noticeably and pleasantly individualistic, possessing a smooth, creamy texture, with nuances of boiled rice and rich vanilla accents. As such, Ao Vodka is best enjoyed chilled, with nothing added to detract from its flavor. (ao-vodka.com)  —R.C.H.