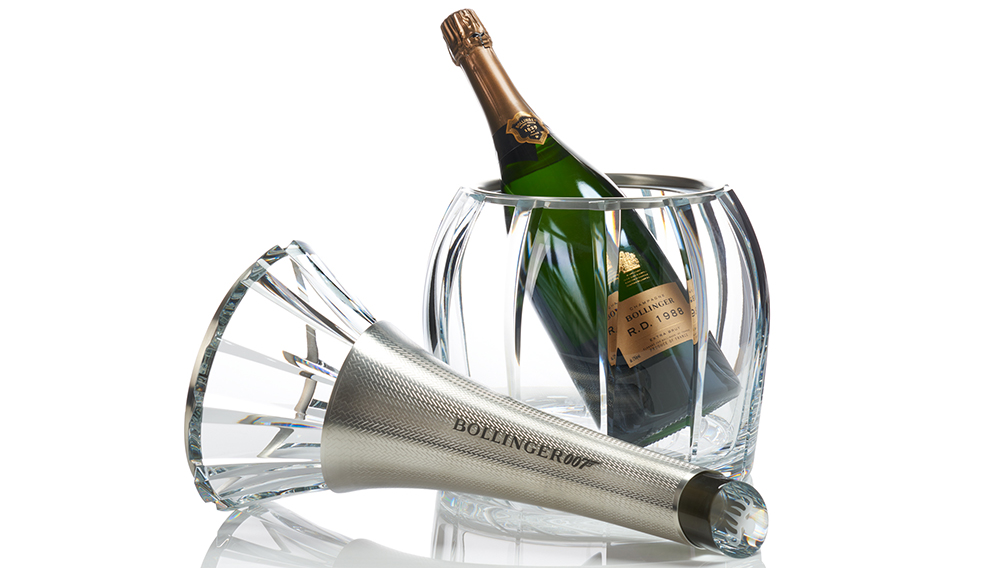 In GoldenEye, as James Bond speeds his Aston Martin DB5 along a mountain road, he suddenly screeches to a halt and flips open the car’s console, revealing to his companion a hidden cooler containing a Champagne flute and an iced bottle of 1988 Bollinger. A select few of us can also chill out with a magnum of 007’s vintage of choice—free from the encumbrances of trained assassins. In honor of Spectre, the 14th Bond film to feature its bottlings,the 186-year-old Champagne house has released the Bollinger Spectre Crystal Set. This limited edition of only 307 examples pairs a magnum of Bollinger’s 1988 R.D. Extra Brut with a two-piece crystal ice bucket designed by Eric Berthés for the Saint-Louis crystal manufacturer of Lorraine, France. The bucket’s etched lines culminate in a base shaped like the film franchise’s signature gun muzzle, and the top is capped with Spectre’s sinister octopus symbol. champagne-bollinger.com)  — Richard Carleton Hacker

The ancient Romans celebrated wine in their verse as ardently as they did love. “No poems can please for long or live,” wrote Horace, “that are written by water drinkers”—which perhaps explains why Mark Nelson, a passionate admirer of the classics, ventured into viticulture. While building a home on Napa Valley’s Pritchard Hill, he and his wife, Dana Johnson, retained the vineyard manager David Abreu to plant 15 acres with Bordeaux varietals and, in 2002, brought the wine-industry veteran Janet Pagano on as their managing partner. Together they transformed the property into Ovid Napa Valley, appropriately named for the author of the Metamorphoses. Although the estate produces a highly allocated Cabernet Sauvignon–based blend, one of the rarest of its wines, Hexameter, favors Cabernet Franc. The Ovid 2012 Hexameter Napa Valley tantalizes the nose with aromas of blood orange, anise, black raspberry, and coffee cream before cloaking the palate in its deep folds of purple velvet. (ovidvineyards.com) —Brett Anderson

Many remarkable developments have occurred in the winery where the winemaker Chris Carpenter carefully crafts Lokoya and Cardinale, two of Napa Valley’s best-loved red wines. Though the vineyards—and hence the wines—are different, his goal for both remains the same: to allow the places and climate to tell the unique story of each vintage. This philosophy he passed on to his protégé, Laura Díaz Muñoz, who has since taken on the role of winemaker at Galerie, a new label that produces expressions of Sauvignon Blanc and Cabernet Sauvignon from Napa Valley and Knights Valley. A native of Spain, where the Galician Albariños set a standard for her palate, Muñoz has a rare gift for rendering white wines. The Galerie 2013 Sauvignon Blanc Naissance Napa Valley presents a joyous infusion of ripe peach, loquat, and honeysuckle invigorated by an undercurrent of citrus acidity. (galeriewines.com) —B.A.