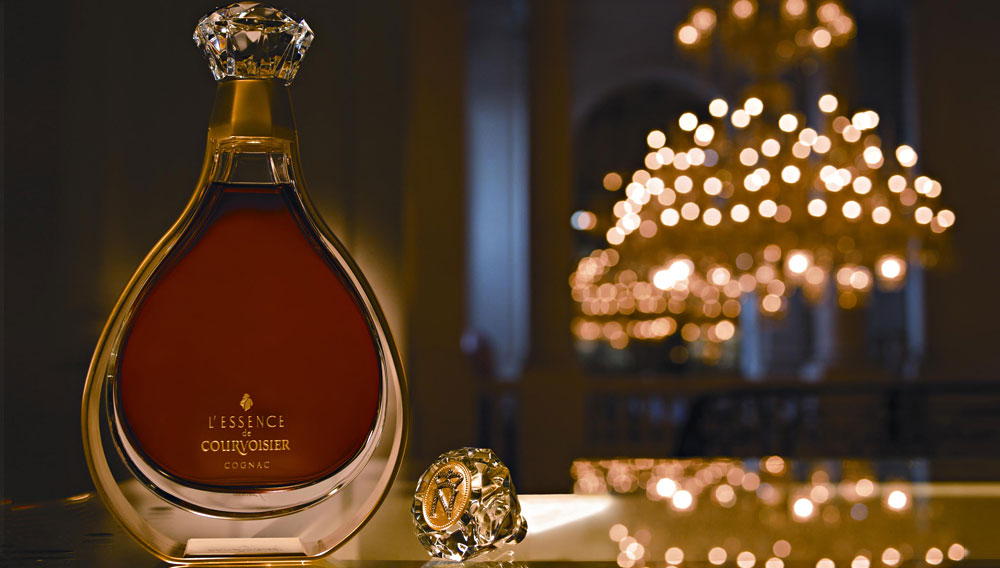 As the bucolic Charente River flows silently past the majestic Château Courvoisier, one would hardly guess that the musty Paradis cellars of this historic Cognac house sequester some of the oldest eaux-de-vie in France. It was from these aging barrels that more than 100 precious Cognacs from the two most exclusive crus—Grande Champagne and Borderies—have been selected to produce L’Essence de Courvoisier ($3,000), the newest luxury offering of a Cognac once favored by the emperor Napoléon.

‘Essence de Courvoisier was the final creation of master blender Jean-Marc Olivier before he retired. He worked closely with the current master blender, Patrice Pinet, to produce this extraordinary digestif, which features eaux-de-vie dating to the beginning of the 20th century, along with Cognacs from the 1970s and ’80s. Each vintage signifies an achievement in the evolution of the House of Courvoisier. From the first part of the last century came Cognacs that heralded in a new designation, Napoléon. From the 1970s came Grand Champagne distilled by a new process, using gas to create a more uniform heat dispersion in the copper pot stills. Cognacs from the 1980s were the first to be aged in oak from Tronçais and Jupilles, rather than the traditional Limousin forest oak, resulting in more pronounced aromatics.

In all, the average age of L’Essence de Courvoisier is approximately 50 years. From a tulip-shaped nosing glass, chocolate and marzipan scent the air. The first sip brings a silky smooth texture with flavors of light cedar, black cherries, and a tinge of citrus. Gentle, yet full-bodied, this is a Cognac to be savored along with the graceful, individually numbered tear-shaped Baccarat decanter it comes in. The faceted crystal stopper is inspired by the 10 signet rings Napoléon gave to his most loyal military commanders, making this indeed a gift of noble countenance. Only 3,000 bottles have been produced, of which 125 are destined for the United States. (www.courvoisier.com)