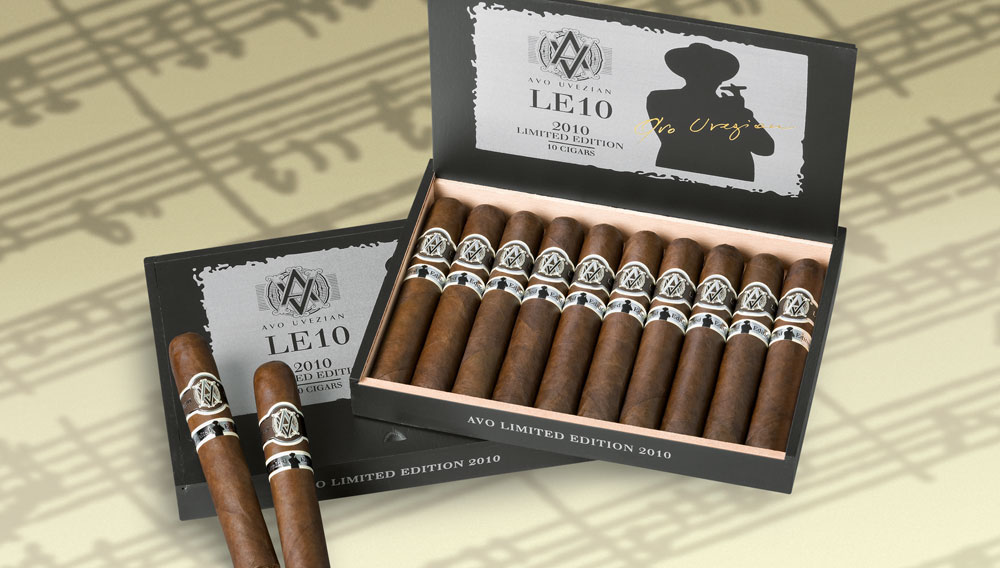 The Avo LE 10 is one of the most symbolic cigars ever produced by Henke Kelner’s famous Tabadom factory in the Dominican Republic.  The cigar is named for musician and cigar impresario Avo Uvezian, LE signifies limited edition, and 10 represents the tenth year of this celebrated series. Ten also happens to be the number of cigars contained in the distinctive black and silver box bearing Avo’s silhouette with cigar in hand. And, 2010 marks Avo’s 85th birthday.

The LE 10 is the most powerful cigar thus far in the Avo Limited Edition series. Only one size is produced, a 5½ x 55 Super Robusto ($15.50 each/$155 per box). One can liken it to the bass notes of Avo’s musical scores, for the filler is all ligero, the strongest, thickest leaves from the topmost section of the tobacco plant. Thus, the filler must be bunched looser than normal, to ensure steady combustion throughout the length of the smoke. As a result, the draw is the smoothest of any in the Avo line. A Sumatra Mexico binder adds some treble notes to the taste and a sun-grown Ecuadorian wrapper provides an operatic basso profundo to the overall strength, making the LE 10 a perfect after-dinner composition. (www.avo.com)