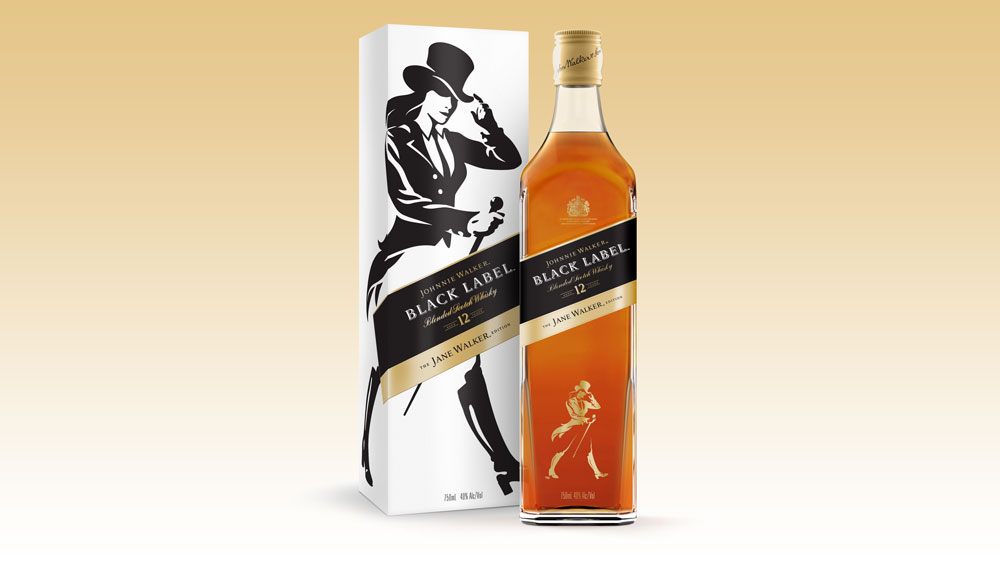 Now Johnnie no longer has to walk alone. The chic, debonair image of a striding Jane Walker will make her appearance on special limited-edition bottles of Johnnie Walker Black Label called the Jane Walker Edition ($35), beginning in March 2017 to coincide with Women’s History Month and International Women’s Day on March 8.

The saying “Behind every great man, there is a great woman” first appeared during the 1940s. But now that phrase has evolved to an even more relevant phrase, as it becomes “Alongside every great man, there is a great woman.” And in the world of spirits, nowhere is this more evident than with the appearance of Jane Walker, the first female counterpart to the brand’s iconic striding-man logo that represents Johnnie Walker Black Label, the most widely distributed blended Scotch whisky in the world.

In addition, for each of the 250,000 Jane Walker Edition bottles produced, one dollar will be donated to various organizations that champion women’s causes, as part of the brand’s #WalkWithJane program. One of the nonprofit organizations Johnnie Walker will be supporting is Monumental Women, a campaign by the Elizabeth Cady Stanton and Susan B. Anthony Statue Fund to create a monument in New York City’s Central Park that pays tribute to suffrage leaders, including Elizabeth Cady Stanton and Susan B. Anthony.

“Jane Walker is a celebration of the many achievements of women on the shared journey toward progress in gender equality,” said Stephanie Jacoby, vice president of Johnnie Walker North America. “Jane Walker will not replace the original striding-man icon, but she will now ‘walk’ alongside him to represent the brand’s commitment to progress in gender equality. With both icons, we aim to inspire people to ‘Keep Walking.’”

In 1909, John Walker’s grandsons George and Alexander II officially named their family’s signature blend Black Label. The whisky has a faint smokiness accenting the citrus, green apples, and subtle tannins from the sherry oak barrels in which the spirit is aged.