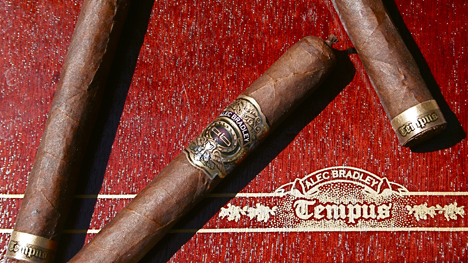 Like a talented understudy waiting to go onstage, Alec Bradley cigars started out rather clandestinely in 1996. Then, in 2002, the company’s chairman, Alan Rubin, discovered some exquisite wrapper leaf being grown in Honduras, just north of the Nicaraguan border. Rubin decided this tobacco would become the basis for a new cigar that would have a starring role in his company. As this leaf aged, Rubin watched it carefully, waiting for the tobaccos to reach perfection.

At last the leathery Honduran wrapper and it’s equally pronounced Honduran filler and binder leaves were at the peak of their flavors. Only 20 per cent of the cigar rollers in the Raices Cubanas factory in Honduras were selected to make this brand. Because of the lengthy monitoring of these tobaccos, Rubin named his new cigar the Alec Bradley Tempus. (Tempus is Latin for time.) There are eight shapes, ranging from the limited-edition 54 x 6¾ Magistri to the 7½ x 41 Creo, a lancero, shown here. The taste is decidedly rich, full, and spicy, making it worthy of an encore after any hearty meal. Prices range from $8.75 to $11. (www.alecbradley.com)