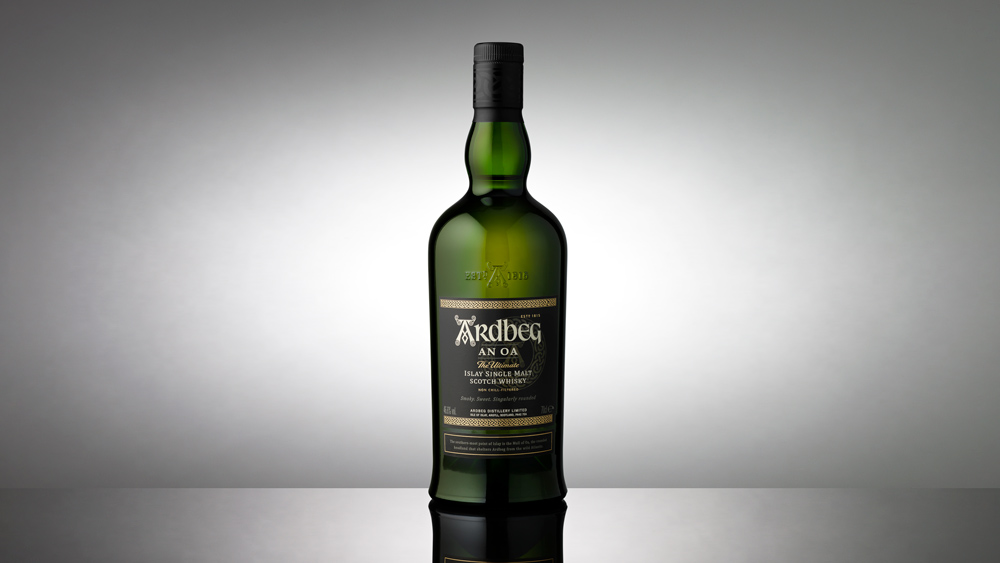 On a surprisingly sun-splashed afternoon on the Scottish island of Islay, Dr. Bill Lumsden, Ardbeg’s director of distilling, ducks into a building he affectionately calls the Gathering Room. The space once held the kilns that were used to malt the distillery’s barley, but today it’s home to a trio of 60,000-liter French Oak vats that play a pivotal role in the creation of the brand’s latest full-time expression, Ardbeg An Oa (pronounced Ahn-Oh). “This is the real secret to the new whisky,” Lumsden says, gesturing to the vats behind him.

About three and a half years ago, Marc Hoellinger, CEO of the Glenmorangie Company (Ardbeg’s parent company) charged Lumsden and the distillery’s director of whisky stocks, Brendan McCarron, with the task of creating a fourth whisky for the brand’s core range. This new permanent expression had to not only showcase the elements that characterize all Ardbeg single-malts—a smokiness mixed with oceanic minerality and hints of citrus—it also had to appeal to imbibers who aren’t as smitten with the peat-centric flavors and aromas that characterize many Islay whiskies, Ardbeg’s included.

“We had this metaphorical vision of an iron fist in a velvet glove,” says Lumsden, “something that had the intensity and the hallmark power of Ardbeg, but that was a bit softer to drink and a bit more accessible.”

When Ardbeg unveiled Uigeadail and Corryvreckan—in 2003 and 2009, respectively—those core expressions reflected Lumsden’s handiwork. (He took on the director of distilling role in 1995.) The An Oa ($60) project, however, coincided with McCarron stepping into his current position, who embraced the challenge when he took the helm.

In much the same way that Lumsden began with Oloroso sherry casks when he fine-tuned the recipe for Ardbeg Uigeadail, McCarron sought out the richest Pedro Ximenez (PX) sherry casks aging in the distillery’s warehouses. From there, McCarron added whiskies of various vintages aging in charred virgin American oak barrels, as well as a healthy measure of spirit from ex-bourbon casks (used for the whisky at the core of Ardbeg 10). “We tried to make a sweeter whisky than Ardbeg 10; but it also had to be smokier than Ardbeg 10 [to stay balanced],” McCarron explains. “It was a challenge of going in two different directions at the same time.”

While the new whisky still presents with peat on the nose, the pale green-golden elixir is definitely softer on the palate, revealing notes of chocolate and toffee up front, which give way to hints of smoked tea leaves and a touch of that Ardbeg peatiness, interlaced with sweet undertones thanks to the inclusion of whiskies that have aged exclusively in those PX sherry casks. The flavors are fully integrated and delivered via a creamy mouthfeel—characteristics that Lumsden attributes to a three-month marriage in those French Oak vats. “It’s become even more important for this project than we believed it would be,” he says of that marrying process. “It really has put the final gloss on it.”

Lumsden and McCarron both acknowledge that the An Oa recipe, which is sans age statement, will evolve over the years, and that includes the duration of time that the whisky spends in the marrying vats. It’s far more art than it is science; and that, they believe, is the keystone of the whisky’s success.

“We have no interest whatsoever in efficiency,” says Lumsden, explaining that it leads to an inferior and bland-tasting final product. “So the fact that we’ve horribly complicated things, I think that’s good.”