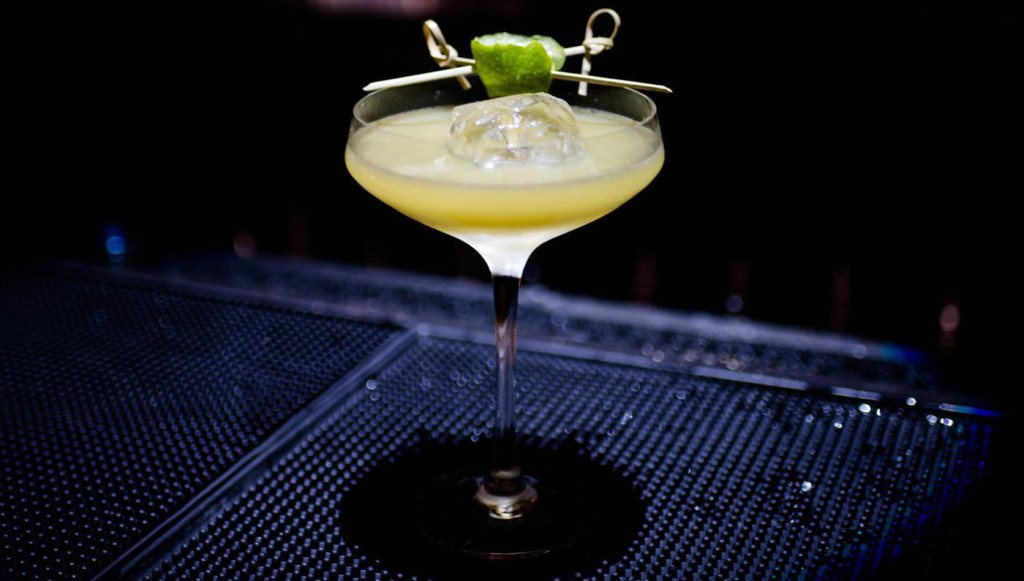 There are two kinds of cocktails. Well, there are actually a lot more than two, but for our current purposes, there are two: cocktails and competition cocktails. Cocktails are made to be consumed and enjoyed by people, in their entirety; possibly even more than one. Everything from the simplest dry martini to the most convoluted tiki drink falls under this admittedly large umbrella. Competition cocktails, on the other hand, are made to be sipped a few times at bartending competitions by judges who are also evaluating the creations of several other mixologists. Competition cocktails are, by and large, crammed full of fancy homemade syrups and tinctures and other ingredients that may or may not be detectable by human taste buds. They tend to be front-loaded; since the judges won’t finish the drink, it’s designed to give up its secrets within a few sips. You don’t order a second round of competition cocktails; you likely don’t even finish the first.

Which is what makes the Poet’s Muse, created by Justin Lavenue and the best-selling cocktail at his bar, the Roosevelt Room in Austin, so extraordinary. It’s one of those rare beasts created expressly for a competition (Lavenue won the national finals of Bombay Sapphire Gin’s “Most Imaginative Bartender” mix-off with it) that can stand proudly next to any “real” cocktail—and stands head-and-shoulders above most of them.

The origins and the recipe for the Poet’s Muse sound slightly ridiculous in theory, as if they could have been plucked from an episode of Portlandia. The inspiration, says Lavenue, came from a 17th century haiku by the father of the art form, Matsuo Basho: “Ancient pond, a frog jumps in, a splash of water.” (Never mind that the translation doesn’t scan within haiku’s five-seven-five parameters.) “So I tried to make the drink Japanese-inspired, using Japanese bartending techniques, but I also tried to make it look kind of like a pond.” Which it does, albeit an algae-filled pond, thanks to the use of matcha green tea powder, which lends both color and flavor to the drink.

The two keys to the drink’s deliciousness, apart from the Bombay Sapphire gin which is its base spirit, are the Poet’s Cordial and the umami tincture, both created by Lavenue. The cordial includes pistachio milk, which has an orgeat-like flavor; honey and matcha powder in equal amounts; and “just some winter spices—vanilla, star anise, and cinnamon.” The tincture sounds more like a bar bite than part of a cocktail recipe. “Sauteed shitake mushrooms, almost roasted, because I wanted them burned a little bit. And do that in butter, so the butter gets a little brown, too. And just add Bombay Sapphire to that—Sapphire’s the base of it—and a little bit of salt. It lends an umami, buttery, salty flavor to the drink.”

Every aspect of the Poet’s Muse has been thought out in detail, right down to how it’s shaken. “The Japanese have a very meticulous way of making a drink,” Lavenue says. “They’re almost always shaking over only one or two ice cubes, and it’s a very unique shake called the hard shake. The idea is, usually in America you’re doing a strong shake, doing dilution, breaking up the ice. This one, you’re trying to push air into the drink. So the idea is really small, quick movements with the wrist, so that it’s whipping around the ice cube more.”

Lavenue, who’s been bartending since before he was old enough to legally drink his creations, came up with the basic idea for the Poet’s Muse soon after losing in the national finals of the Most Imaginative Bartender competition in 2014. He spent the year refining the recipe, as well as opening the Roosevelt Room with a partner. He pulled out all the stops for this year’s MIB finals, including presenting the judges with a recipe card written in haiku form.

But the Poet’s Muse is a staggeringly good drink even without the bells and whistles. The sweet, sour and savory elements circle each other warily without clashing, each one head-faking the others and juking to center stage for a moment or a sip, before slipping back to the wings and letting another element grab the spotlight. Each ingredient, from the pistachio milk to the brown butter—and, of course, the gin—stands out from the rest but blends into the whole at the same time. It’s quite a balancing act. And it’s worth traveling to Austin to experience.

Of course, if you feel like trying a go at it yourself, here’s how to do it. But really, we’d encourage you to just head to Austin.

Shake hard over a large ice cube. Strain into a large coupe glass with the large ice cube dropped in. Garnish with a lime peel rosette. Serve on a Zen garden.

Saute the mushrooms in butter for 10 minutes. Add Bombay Sapphire and salt and steep for another 10 minutes. Strain mushrooms off and freeze to let fats coagulate. Strain off fats and bottle.