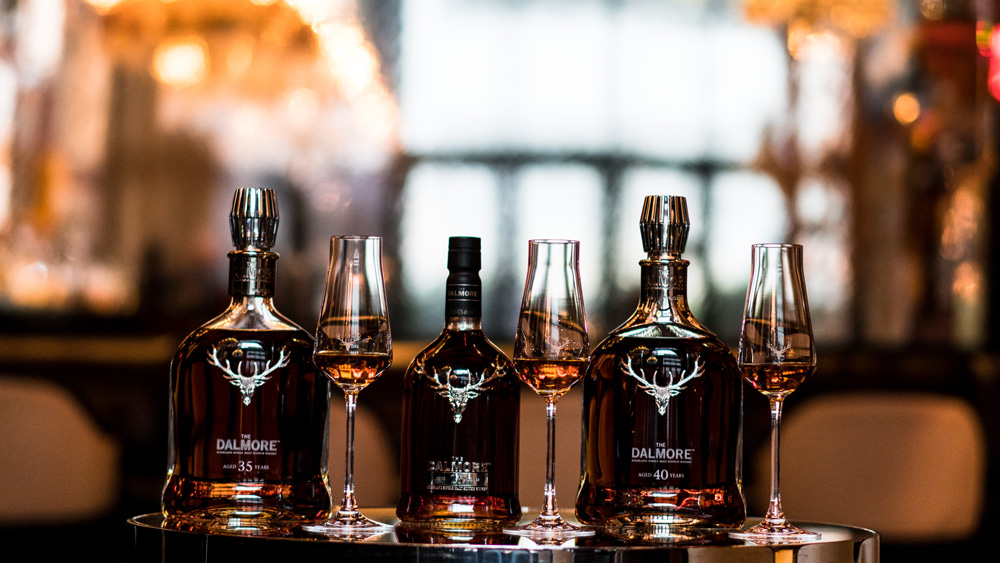 The new whisky flight available at The Bar at the Baccarat Hotel in New York City is called 100 Years of the Dalmore. The Dalmore’s distillery in Scotland, north of Inverness, opened in 1839, which might make this celebration seem about 79 years late. But this trio of drams doesn’t mark an anniversary. Rather, it’s an homage to the brand dreamed up by the Baccarat’s wine director — and Dalmore enthusiast — Matthieu Yamoum.

Rare expressions of the Dalmore are a permanent fixture of the bar, but Yamoum says, “I wanted to create a story about why we have the Dalmore. I love it personally, so I really insist on having it. I can talk about it.” When the Dalmore’s 40 Year Old bottling was released last fall, he hit on a mathematically elegant angle: “I was thinking about it, and I thought, 25” — the Dalmore’s 25 Year Old expression — “plus 35” — the 35 Year Old, released in 2016 —  “plus 40 equals 100.” And so was born 100 Years of the Dalmore ($1,200), featuring a one-ounce pour of each of the three super-aged whiskies.

100 Years of The Dalmore at the Baccarat  Photo: Courtesy The Dalmore

This flight represents more than just a nice round number. Each whisky has been aged in a unique fashion by master blender Richard Paterson, and the three flavor profiles are highly distinctive, with each carrying Paterson’s signature of a multi-barrel journey. The 25 Year Old serves stints in American ex-bourbon and first-fill bourbon barrels, Palomino Fino sherry casks, and Tawny Port pipes from Portugal. The raisin and almond notes from the sherry casks dominate initially, but the longer it’s held on the palate, the more the dark sweet notes of the port come to the fore. The Dalmore 35 is aged in ex-bourbon barrels, Matusalem (sweetened Oloroso) sherry casks, and vintage Colheita port pipes dating to 1970. The whisky is exceptionally well-balanced, with dark chocolate, tropical fruit, and baking spices sharing space with the tang of the sherry and the depth of the port. The 40 Year Old employs the simplest aging process, moving between ex-bourbon, first-fill bourbon and Matusalem sherry casks. It’s the driest and spiciest of the trio, with coffee, caramel, chocolate, and orange notes mingling with a fair amount of oak.  Only 1,000 bottles of the 25 and 35 are released annually, while the 40 Year Old sees a mere 750 bottles.

The Baccarat/Dalmore connection extends beyond just this flight offering to the bottles themselves; the 35 and 40 Year Old whiskies are contained in elegant Baccarat crystal decanters. All three bottles are presented alongside the drams, which are poured into Baccarat Champagne flutes adorned with the Dalmore’s stag’s head logo.

Yamoum or his staff will walk any takers through the flight. “I really love talking about it, and I want people to know about it,” he says. “I want to be here, I want to get feedback on it.” He plans to offer the flight as long as he has the whisky to do so. “There is no time limit…. I want people to try it until we run out, and then we’ll see what happens. Maybe we’ll do “150 years of the Dalmore,” he says, as there is also a very rare 50 Year Old expression that was released in 2016.