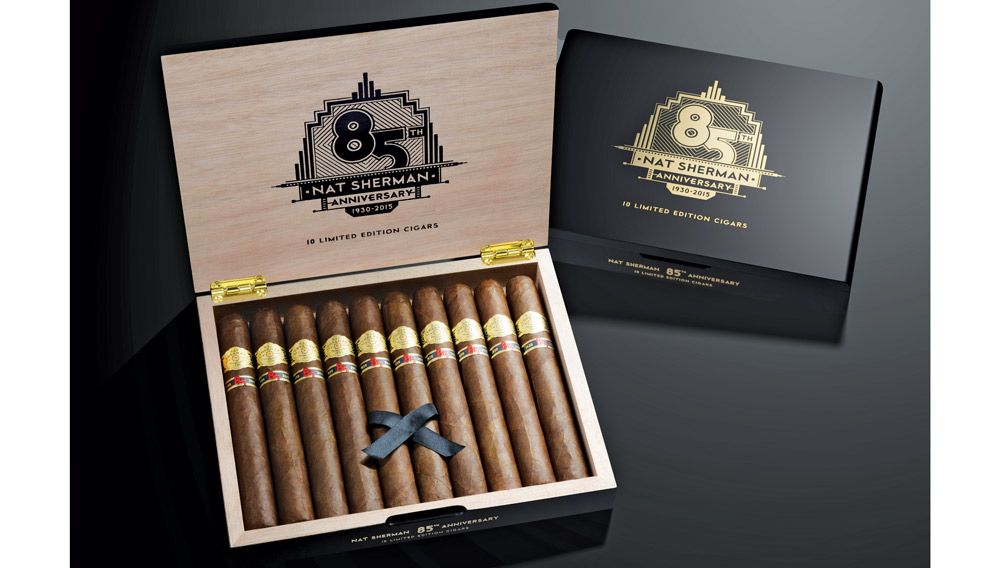 Nat Sherman’s latest release celebrates the brand’s past and points to its future.

Michael Herklots leans back in a chair at the Nat Sherman Townhouse in Manhattan and takes a long, easy puff from one of the brand’s new 85th Anniversary cigars. Exhaling slowly, he taps the ash and smiles. “It’s a killer cigar,” he says.

In a few hours, this building—the company’s flagship store—will be bustling with guests invited to celebrate the launch of the 85th Anniversary. Nat Sherman, a family-owned business that was founded in 1930 in Manhattan, is producing only 25,000 examples and offering them in boxes of 10 for $190.

As he smokes the 6½ × 54 cigar, Herklots—the company’s vice president of retail and brand development—describes its composition: Nicaraguan binder and filler tobaccos and a Dominican wrapper. “That combination is very unique,” he says, explaining that the wrapper takes the edge off the Nicaraguan tobaccos. “Typically [Nicaraguan] cigars are pretty full-bodied, aggressive, and strong. This is full-bodied and rich, but it still has balance.”

According to Herklots, the 85th Anniversary exemplifies the brand’s goal of creating cigars that offer new flavors and new experiences for smokers. “We’re very much in the business of making cigars that stand out, that are unique, that don’t taste like other things that are already being sold on the market,” he says.

Bill Sherman, one of the company’s executive vice presidents and a grandson of its namesake and founder, says the release of the 85th Anniversary enables Nat Sherman to simultaneously promote its history and preview its future. “It’s important for people to realize that we’ve been around for that long,” he says. “It’s a time to respect and look back and appreciate the values, the ethos, and everything that has remained the same for 85 years, but also an opportunity for us to express where we’re going.”

Nat Sherman began as a tobacco retail store on Broadway in Manhattan’s Garment District. (The Townhouse, which opened in 2007, is located at the corner of 42nd Street and Fifth Avenue and is one of the few New York City establishments with a smoking license.) According to company lore, in the 1930s the store was a gathering spot for executives from the garment and entertainment industries, show-business celebrities, and gangsters. This last group of customers considered Nat Sherman neutral territory, where rivals could set aside quarrels while sampling the store’s offerings. By the end of the decade, the company was using U.S. and Cuban tobaccos to produce the first Nat Sherman–branded cigars, in Tampa, Fla.

Last year, Nat Sherman released the limited-edition Joel Sherman 75th Celebration, which commemorated the 75th birthday of the founder’s son, who is now the family’s patriarch and the brand’s CEO. Herklots describes that cigar as “elegant, sophisticated, and creamy.” He says smokers familiar with the 75th Celebration should be prepared for a much different experience when they light up the brand’s latest limited-edition offering. “The 85th Anniversary is everything the 75th is not,” he says. “If the 75th is very retrospective in honoring 75 years, the 85th celebrates 85 years, but it also represents a sort of jumping-off point for what’s to come. A 6½ × 54 Nicaraguan-heavy blend that is still balanced and sophisticated could not be more relevant, not just for the industry and for our customers, but for where we are right now in 2015.”